The overwhelming power of the people in Puerto Rico has toppled the governorship of Ricardo Rosselló in just 12 days.

They protested after texts between the governor and his allies were leaked to the public on July 13. The messages were littered with homophobia, sexism, contempt for hurricane victims and copious evidence of corporate cronyism.

Through mass demonstrations and a general strike that shut down one of Puerto Rico’s major highways, demonstrators made it impossible for the governor to stay in office. Now, the government of Puerto Rico is in chaos as elected officials scramble to find a successor. 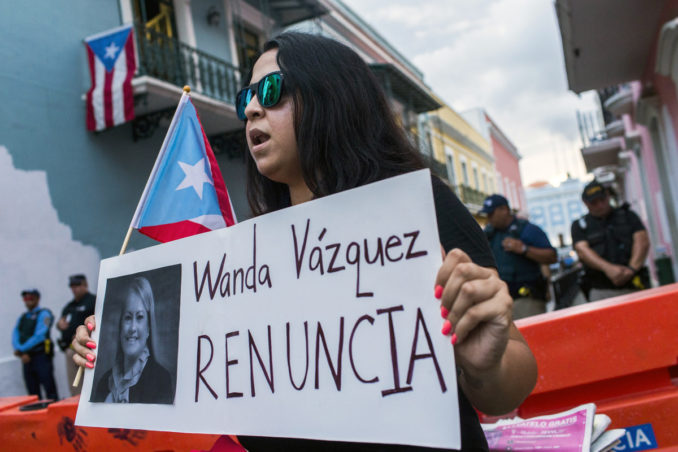 People demand resignation of yet another puppet of Wall Street.

Rosselló’s successor would have been former Secretary of State Luis Rivera Marín, but he resigned before Rosselló did. The scandal brought on by the texts, as well as the indictment of two administration officials for money laundering, have thinned out Rosselló’s cabinet, making the search for the next governor more complicated.

However, while Pierluisi was confirmed by the Puerto Rican House of Representatives, the Puerto Rican Senate did not have time to confirm him as secretary of state before he assumed the office of governor. This made Pierluisi’s appointment as governor illegitimate — a position quickly upheld by the courts. In less than 20 days, two governors were forced to leave office.

The sloppy and rushed appointment of Pierluisi was done as a concession — not to the people of Puerto Rico, but to the capitalist ruling class. Pierluisi is a longtime politician and corporate lobbyist. And while he professed intentions of challenging the austerity program — known as PROMESA, forced on Puerto Rico by the U.S. — his brother-in-law serves on the governing board of that agency.

The PROMESA austerity programs put in place over the last two years were a major cause of the outrage that drove the protests to oust Rosselló. The attempt to install Pierluisi was a shoddy sleight of hand to maintain the financial dictatorship in place on the island.

The next in line is Justice Secretary Wanda Vásquez. But Vásquez has made it clear from the beginning that she does not want the position. The people of Puerto Rico have made it equally clear that they feel the same way: Calls for Vásquez’s resignation began before Rosselló was officially out the door.

The colonial puppets of the capitalist class are in complete disarray, and the scramble for power is becoming more and more desperate. Jenniffer González-Colón, a nonvoting member of the U.S. House of Representatives (as a colony, Puerto Rico has no true representation in the U.S. Congress), is rumored to be the favorite. But Puerto Rican Senate Majority Leader Thomas Rivera Schatz, who did not confirm Pierluisi as secretary of state and then filed a lawsuit against his governorship, is an obvious competitor.

It’s impossible to say who will come out on top in this petty political knife fight. But what this conflict shows is the weakness of the U.S. capitalist class on the island of Puerto Rico.

For decades, Wall Street has used the island as its tropical piggy bank, finally smashing it open with brutal austerity in 2017. But the people of Puerto Rico have turned the tables. They have made it clear that no governor chosen by the colonial administration is acceptable.

While an official power vacuum exists in the executive branch, the last month has shown that on the island of Puerto Rico, it is the people who rule.