Despite the know-nothing stance of the gang in the White House, climate change is a subject that hundreds of millions of people cannot ignore.

Massive spring floods in the U.S. Midwest continued into June, causing billions of dollars in damage as levees were breached and fields turned into vast lakes.

Record temperatures have taken lives in many countries, from heat waves in Europe to even more deadly conditions in southern Asia and parts of Africa.

The destruction caused by Hurricane Maria in Puerto Rico two years ago has now engulfed that nation in a political crisis, as the governing colonial authorities imposed by the U.S. have been exposed for ripping off funds intended for hurricane relief. 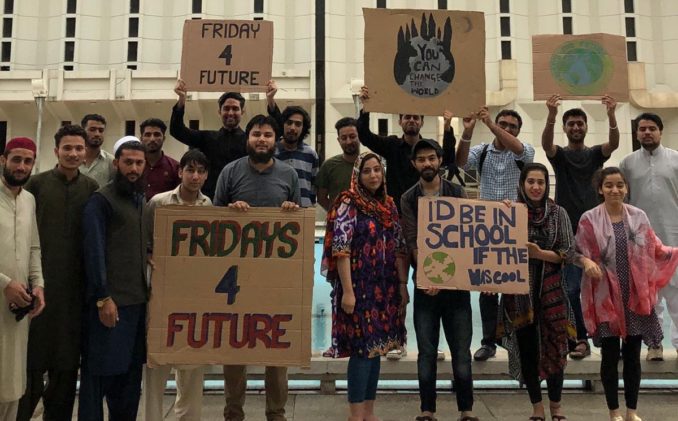 Students and teachers rally against climate change at a school in Islamabad, Pakistan, as part of a global day of youth action, May 24.

At the same time, the super-rich class of U.S. billionaires, who own the political process euphemistically known as “democracy,” continue their pursuit of super-profits from fossil fuels, especially oil and gas — major contributors to global warming and increasingly destructive storms.

Is it merely a coincidence that the major “trouble spots” in the world, where the threat of U.S. military intervention is ever present, are also oil producers? Think Venezuela and Iran. Venezuela has the largest reserve of untapped oil in the world and was once a major source of profit for U.S. oil companies. So was Iran, before a revolution there took back control of its natural resources.

And where has the Pentagon been engaged in actual shooting wars in recent years?  Iraq, Libya, Syria — all oil producers — as well as Afghanistan, where the U.S. company Unocal planned to build pipelines to transport oil and gas from Turkmenistan, part of the former Soviet Union.

Somehow, in the vast ocean of Western reporting on these wars and “trouble spots,” the connection to oil is rarely mentioned. Nor is the contribution of these wars to the huge problem of global warming. If only half of the current Pentagon budget were allocated instead to fighting climate change, the world would be a much safer, healthier place.

Young people around the world, however, are deeply conscious of this problem, which threatens their very future. The groups Fridays for Future and Youth Climate Strike have started a movement calling for a global general strike in September.

Their call includes the following: “To date, young people have led the climate strikes around the world. Now we need adults to join us too. On September 20, 2019, Fridays for Future, the Youth Climate Strike movements, and all of our international friends and allies call for a global general strike. Mark and add it to your calendar. Workers everywhere, please: we are asking you to join us and walk away from a system that is destroying our planet and will threaten the survival of millions of people, plants, and animals within the next 10, 20, 30 years.

“We don’t feel like we have a choice: it’s been years of talking, countless negotiations, empty deals on climate change and fossil fuel companies being given free rides to drill beneath our soils and burn away our futures for their profit. Politicians and fossil fuel companies have known about climate change for decades. They have willingly handed over their responsibility for our future to profiteers whose search for quick cash threatens our very existence. This crisis is very real, and it cannot be ignored any longer.

“We have learned that if we don’t start acting for our future, nobody else will make the first move. We are the ones we’ve been waiting for.”

An antidote to pessimism

This youth movement is a welcome answer to the growing pessimism over climate change. The prevailing attitude being inculcated in the U.S. is that either there is no problem (Trump’s position) or that it’s already too late to do much about it. Both are wrong.

A lot is already being done, but you won’t view it in prime time or in  newspaper headlines.

According to the World Resources Institute: “China accounted for 45 percent of global investment in renewables in 2017 and leads the world in installed capacity (334 GW) , followed by the United States (161 GW) and Germany (106 GW).” [GW stands for gigawatts.]

So the country responsible for nearly half the world’s investment in renewable energy is the People’s Republic of China! A nation that in just a couple of generations has pulled itself up from abject poverty to become the world’s leading manufacturer.

The world is changing. The stranglehold by a few imperialist countries on the world economy is breaking down. China is showing that there can be sustainable development. Of course, it took a revolution for China to get where it is.

Youth around the world get it, and they are organizing.