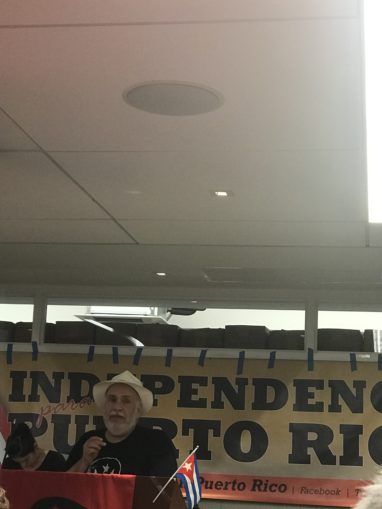 The slightly edited message below was presented by Ed Ortiz, on behalf of Call to Action on Puerto Rico, at the July 26 Moncada Day commemorative program held in New York City on July 27.

Call to Action on Puerto Rico is here tonight to join all of you in this important celebration of the 66th anniversary of the assault on Moncada, the spark that gave impetus to the Cuban Revolution, a revolution that inspired and supported freedom fighters around the world.

The Call to Action Collective was formed in July 2015. It is an integral part of a rebellious, militant and determined diaspora that understands that the precarious political, social and economic conditions that confront Puerto Rico are a direct result of its colonial relationship of subordination to the United States.

The people of Puerto Rico have drastically changed their political dynamic. Everything is in flux right now. The massive protests of hundreds of thousands demanding the resignation of Governor [Ricardo] Rosello, have made it clear that folks are ready for some fundamental changes.

Right now, the Governor is slated to resign on August 2, and the interim Governor, Wanda Vasquez, the current Secretary of Justice, is under investigation due to accusations that she ignored evidence of corruption in the provision of hurricane relief.

The folks are already preparing signs saying “WANDA RESIGN.” And when Wanda is gone, it will be the next one. Today’s [July 27] N.Y. Post headline put it correctly:  “Puerto Ricans are not remotely done getting rid of corrupt politicians.”

Prior to the hurricanes, people were already suffering from oppression and the contraction of the economy, an illegal debt that finally brought us to a U.S. Bankruptcy Court and the imposition of a Financial Control Board — La Junta. La Junta is moving forward with closure of over 300 more public schools, plans to reduce the minimum wage to $4.25 per hour for people under 21, 10 percent reduction in pensions, and other draconian measures.

La Junta, led by some of the very people who colluded with corrupt insular and U.S. officials to create the illegal debt, have made it clear that its job is to sell off Puerto Rican resources to satisfy Wall Street debt bondholders who were already making money off the debt. People were already changing things by staying away from colonial elections and status plebiscites.

Hurricane Maria forced people to openly acknowledge that insular colonial administrations over time had been incapable and unwilling to deal with the island’s needs, while demonstrating that they have been at the service of U.S. corporate interests. They would not stand up to the racist Trump. The imperial power refuses to respond to the real needs of the Puerto Rican people and controls its colony with impunity.

Frankly speaking, the people have long known that the insular governments have always been corrupt. The scandal, generated by the leaked emails and chats and their casual depiction of that corruption, was just too much too bear. The chats exposed the willful corruption, homophobia, misogyny and disrespect for the people.

Within two days, the demonstrations began and would not stop. They would only increase in size and intensity every day. Not party people. Everybody. Sectors who have not been seen in the streets before, but led by the young people; very peaceful, except for the violence perpetrated by the police. People did not take the bait.

All of this will eventually lead to the general agreement that we need to take our fate into our own hands; statehood is a fallacy.

The general strike on Monday [July 22] was successful, and organizers showed the populace that it could be done.

We are still waiting to see if the governor actually leaves. He needs a pardon, and the statehood party needs to decide what faction will prevail. The Commonwealth Party is simply irrelevant.

We expect a lot more government dysfunction. La Junta is saying it intends to take a more direct and controlling posture. We hope that the momentum of the people’s protests and demonstrations will continue. The People United Will Win! Long live a free Puerto Rico!  ¡Que viva Puerto Rico Libre!