The bigot-in-chief, Donald Trump, attended a “fundraiser” here the evening of July 24 and was met with protests throughout the day.  The event was a $150-a-plate dinner, hosted by coal industry boss Robert Murray.

The first rally was organized by members of United Auto Workers (UAW) Local 1112 from nearby Lordstown, Ohio, who had just lost their jobs after the recent closing of the General Motors plant there. Speakers angrily commented that Trump had come to West Virginia to brag about how great jobs are now, but the autoworkers know: “That’s a lie. Things aren’t great.” 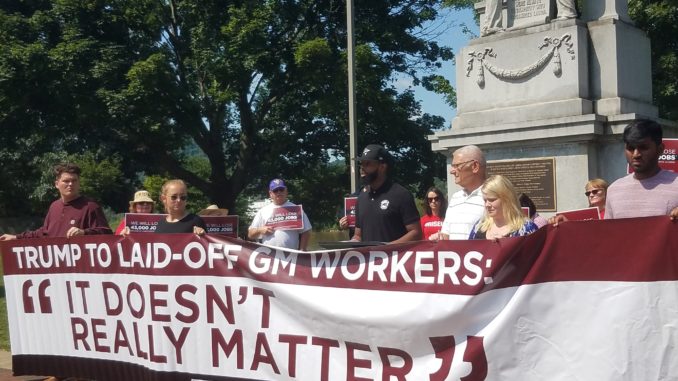 Autoworkers from Ohio protest Trump’s corporate-friendly economic policies that cost them their jobs.

Braylin Rushton, a militant African-American activist within Local 1112, said to the crowd: “Trump came to Lordstown in 2016 and promised more jobs. Since that time, his policies have made it easier for corporations to flourish at the expense of working families. When GM closed, 43,000 people lost their jobs and Trump said, ‘That’s OK.’”

Later in the day, another protest of about 100 people was arranged by Marchers Ohio Valley Empowered.  MOVE’s major focus was the racist mistreatment of migrant families. MOVE supplied signs and imagery calling out the current U.S. administration for incarcerating im/migrants in concentration camps.

The protest was joined by other community activists, clergy, trade unionists and members of the Industrial Workers of the World.  Also present were education workers who have been fighting against privatization for the last two years. Their historic West Virginia actions ignited a national teacher fightback in 2018. Women represented the majority of those at the rally.

An Ohio Valley Pride contingent marched in to join the protest, waving rainbow flags and other flags representing the LGBTQ2S+ community.  Some people had signs calling Trump out for his misogyny, as well as his saber-rattling against Bolivarian Venezuela and the Islamic Republic of Iran.

As attendees walked into the ice hockey arena where the fundraiser was being held, the angry crowd chanted: “Little kids need liberation, not your racist deportation” and “Donald Trump, you racist swine, being Muslim is not a crime.”

Don Viglio, a Marxist-Leninist-Maoist, told Workers World, “Capitalism-imperialism is destroying the world through colonial plunder. As oppressed people starve, Trump is coming here today to accept an obscene amount of cash from one of the richest coal magnates.”

IWW member Michael Mochaidean stated, “While many people here have ideological differences, we are all in solidarity against Trump.”

The multinational crowd was energetic in expressing unity with their homemade signs. One read: “Trump made America hate again,” while a woman in sunglasses brandished the slogan: “Don’t be a fossil fool — Let W.Va. shine!” A nearby protester flourished a down-home sign: “No hate in my holler.”