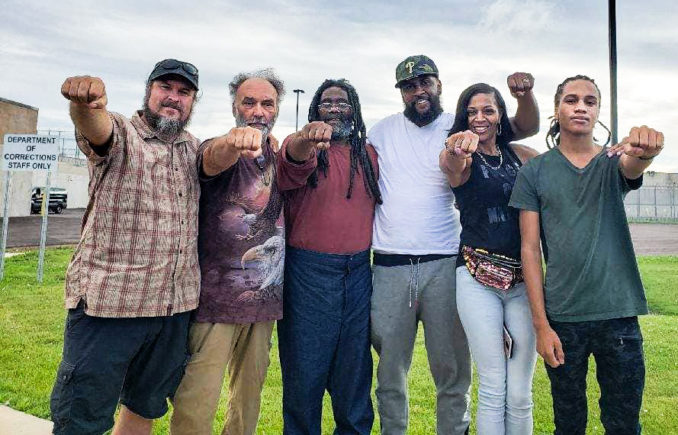 Edward Africa was born and raised in Philadelphia. Prior to joining MOVE, he experienced the street oppression faced by many Black youth in the city, Initially resisting because MOVE had white members, Eddie eventually began to work with MOVE “because what they were giving me was more complete than anything I had ever known.” In and out of jail from the age of 16 in 1963 until he joined MOVE in 1973, Eddie was then frequently stopped by Philadelphia cops. When he refused to be searched, he was beaten when he resisted. As a result, he was charged with assault and resisting arrest.

He was arrested Aug. 8, 1978, during the Philadelphia police assault on MOVE. Eddie wrote about himself: “I’m one of the MOVE 9. We were each wrongly convicted of murder, assault and conspiracy by the late Judge Edwin S. Malmed and each sentenced to 30 to 100 years in prison.” (onamove.com)

Africa has four grown children and several grandchildren whom he has never been with except for brief prison visits. He will be living with family members upon his release.

He states on the Mobilization4Mumia Facebook page, “I want to say that I had no intentions of becoming a revolutionary; this system encouraged me, pushed me to become a revolutionary; JOHN AFRICA provided the direction.”

Despite serving over 40 of their 30-to-100-year sentences, two remaining MOVE 9 members, Charles and Delbert Africa, remain unjustly imprisoned. When recently paroled in May, Janet and Janine Africa stated that they have no cause for celebration until all their brothers are released.