This article was first published May 3 in Avante, weekly newspaper of the Portuguese Communist Party. Its author, a former member of the Secretariat of the PAIGC, the party leading the struggle for the liberation of Guinea-Bissau and Cape Verde, writes on African events for Avante. Translation by WW Managing Editor John Catalinotto.

The African Union has given the Sudanese military junta two months to hand over power to a civilian authority that manages the transition from military to democratic rule.

By doing this, the Pan-African organization has complied with the demands of the Sudanese democratic forces, which for many months have intensified the struggle against dictatorship and for freedom. 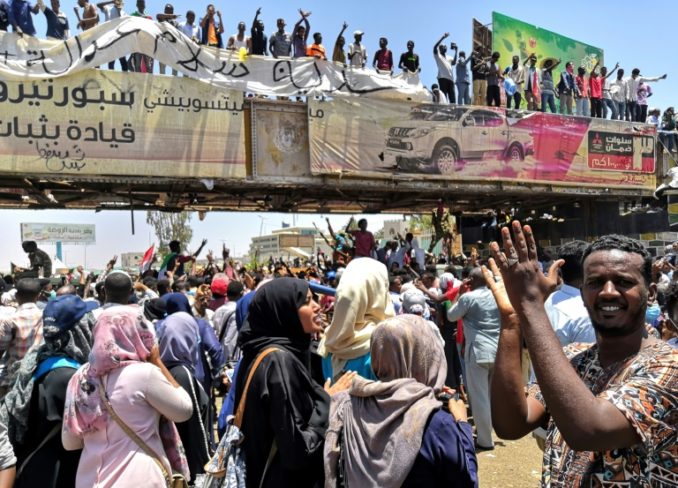 Sudanese women were at the forefront of recent mass democratic organizing.

Sudan is the third largest African country in land area and has more than 40 million inhabitants. It is rich in oil and natural gas — despite having lost three quarters of those resources following the secession of South Sudan in 2011. In addition to possessing hydrocarbons [fossil fuels], Sudan benefits from its location on the Red Sea, which is a fundamental passageway for world trade.

Since December 2018, the Sudanese revolt has constantly grown. It started with protests against the rise in the price of bread, then demonstrations in the streets and squares of Khartoum and other cities. Not even the regime’s proclamation of a state of emergency and its brutal repression, with deaths and imprisonment, could stop it.

The popular uprising, with continuous demonstrations at the gates to the Ministry of Defense, which was surrounded by the masses, forced the April 11 removal and imprisonment of longtime President Omar al-Bashir. Officers committed to the regime carried out a palace coup in an attempt to preserve dictatorial power with new faces at the top.

The generals created a Transitional Military Council, which announced it would prolong the state of emergency and promised to hand over civilian governance within two years. This offer was rejected by the prodemocratic forces, who are supported by hundreds of thousands of people in the streets demanding the immediate transfer of power to civilians.

Sudanese democrats are represented by the Forces for Freedom and Change platform, which brings together different political parties, including the Sudanese Communist Party, professional associations and other organizations that oppose the al-Bashir dictatorship. In recent days, they have been in talks with the military junta to form a transitional body with the majority participation of civilians. So far, the generals have refused these terms.

The situation in Sudan is tense: On the one hand the TMC refuses to hand over or even share power with civilians; on the other hand, the masses demand the advance of democratic change.

This stalemate is all the more serious since the United States and its allies in the region are supporting the generals in the military junta, with their usual maneuvers of pressure and interference. In fact, while the Sudanese people rejected the illegitimate usurpation of power by the generals, the U.S., Saudi Arabia, Bahrain and the United Arab Emirates recognized the TMC.

Washington envoy Steven Koutsis met a few days ago in Khartoum with Mohamed Daglo, number two in the TMC. This general, Sudanese democrats explain, is the commander of the Rapid Support Forces, formed essentially from the Janjaweed militias. The democrats say these militias have spread terror for 15 years in the Darfur region, where they have murdered thousands of people and are therefore responsible for crimes against humanity.

Despite the interference by U.S. imperialism, the Sudanese people’s struggle will win and, sooner rather than later, realize their aspirations for freedom, peace and progress.