Three white supremacists dragged James Byrd Jr., an African-American man, to his death in 1998 in Jasper, Texas, after they chained him to the back of their pickup truck. This lynching was one of the most horrific racist crimes in modern U.S. history and shocked people worldwide. 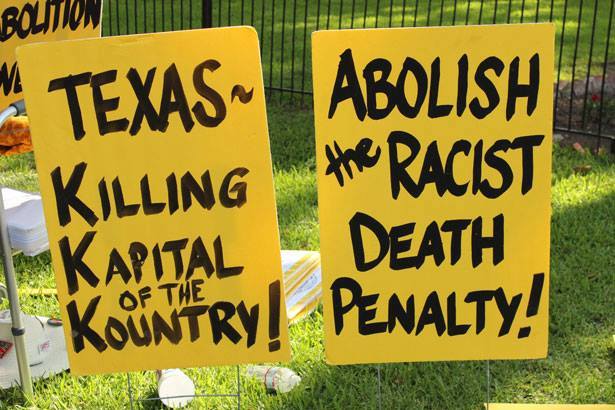 Twenty-one years after Byrd’s murder, King was executed on April 24 this year. Many people who are normally opposed to executions were happy that this racist man, who was known as the ringleader of the crime, would finally get his justice.

The Texas Death Penalty Abolition Movement, based in Houston, released a statement to the media informing them why they would be opposing King’s execution. The multinational organization is the most active anti-death-penalty organization in the state.

The statement noted that politicians were saying the execution was a positive thing that gave justice to Byrd’s family and showed that Texas would punish hate.

But not one governor, nor 99 percent of politicians in Texas ever condemned the racist murders committed by the police in their state.

The press release read: “Our organization is staunchly opposed to all executions just as we are opposed to all racist acts, including what happened in Jasper two decades ago. We will protest this execution, even though we despise what these three men did in Jasper, and stand in solidarity with the family of James Byrd Jr.

“Why? Because it is a hypocritical lie that Texas, its governors and the Texas prison system, which will carry out tonight’s execution, are opposed to racism.”

Activist Joanne Gavin said, “We know that the death penalty is itself a racist hate crime. We remember when Clarence Brandley, an African American, was picked up with a white man for the murder of a white high school student where they were both custodians. The sheriff told the two men, ‘One of you two is going to hang for this. Then pointing at Brandley, the sheriff said, ‘Since you’re the n—-r, you’re elected.’”

Maybe a few cops have been fined $1, as was the case in the death of Joe Campos Torres, brutally killed by Houston police in 1977 after he was viciously beaten, handcuffed and thrown into a bayou on Cinco de Mayo. “Let’s see if the w—–k can swim,” one of the cops said. Torres’ body was found five days later.

The Texas trooper who arrested Sandra Bland was only charged with perjury after her death in the Waller County Jail in 2015. And that charge was dropped by the prosecutor when the trooper agreed to give up his police license.

Every day in the U.S., cops commit officially “legal” acts that are a continuation of lynchings committed against African-American people by white vigilantes throughout U.S. history.

On April 24, outside the death house, as execution time neared, the Abolition Movement set up their usual picket line with signs condemning that night’s execution. Speaking through the bullhorn, they explained that the execution of a racist was not going to stop racism. They explained that not one governor has ever called for an execution when a young Black man has been shot down by cops. No hate crime bill has been passed to remember the victims of racist police murder: “As much as we oppose tonight’s execution, we oppose killer cops who gun down people with impunity. Two hundred and ninety-nine people in the U.S. have been killed by cops just this year, 2019.”

Here are some statistics about the death penalty as it exists under this capitalist system in the “modern” era — since 1976.

The only conclusion is that the death penalty is racist.

The U.S. is fast approaching the disgusting milestone of 1,500 executions since 1976, with the total now at 1,495. King was the fourth prisoner executed in the United States in 2019 and the third in Texas.

Racism has not ended with King’s execution. It will not end until the working class takes state power and presides over a socialist government where any material basis for racism can be eliminated.