Bulletin, April 30: President Nicolás Maduro stated that his government’s mandate was to avoid confrontation at all times and that those involved had to surrender peacefully. He announced that 80 percent of the military and police professionals who were summoned to Altamira were duped: “They were told that they were going to do an operation in the prison of Tocorón” before they saw Leopoldo López and Juan Guaidó and learned the true nature of the mission. (Venezuela TV News, vtv.gob.ve)

This article, originally published in pagina12.com.ar on April 30, and translated by Michael Otto, is available in Spanish at tinyurl.com/y2hggxhd. 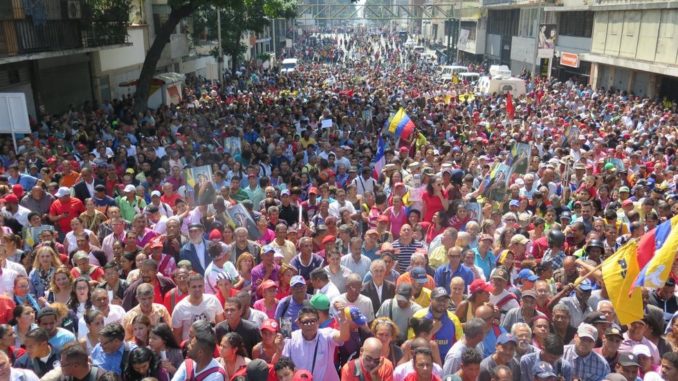 Tens of thousands of Venezuelans gather at Miraflores, the Presidential Palace, to defend their country against the April 30 coup attempt by the U.S.-backed right wing.

[At the end of the April 30 coup attempt], Leopoldo López, [right-wing opposition leader], finally took refuge in the Chilean embassy. He did it together with his wife Lilian Tintori and his daughter.

In less than 12 hours [López] escaped from home detention, joined [presidential pretender] Juan Guadió’s attempted coup d’état [near] the most important military base in Caracas, La Carlota, and then took refuge in an embassy in the afternoon.

Unless the original plan was a big operation to free Lopez, it didn’t produce the hoped-for results.

Events began at 4 a.m. when a small group of 100 members of the Bolivarian National Armed Force (FANB) attempted a coup led by Guaidó and López. The self-proclaimed “incoming president” sent a message through his social networks that the FANB was under his command. The action in La Carlota was short-lived, and the coup plotters quickly moved to the Altamira area, an opposition stronghold in the wealthy Caracas region.

It was known early on that La Carlota — the base — was never under Guaidó’s control and that the country’s troops continued their support for President Nicolás Maduro. This information was announced by the minister of communication, Jorge Rodríguez; the commander of the FANB, Vladimir Padrino López; as well as the president of the National Constituent Assembly, Diosdado Cabello, among others. As time passed, the coup’s threatened violence dissipated.

Guaidó claimed that this was the final phase of what he called “Operation Freedom.” The military provocation had international support from the U.S. government, through Vice President Mike Pence and Secretary of State Mike Pompeo; President of Colombia, Ivan Duque; the Argentine government through its Chancellor Jorge Faurie; Secretary of the Organization of American States Luis Almagro; and President of the European Parliament Antonio Tajani, among others. The government of Spain, for its part, rejected the uprising: “It must be clear that Spain does not support any military coup whatsoever.”

The day then ended with the news of López taking refuge in the Chilean embassy and with conflicting announcements from Guaidó regarding his next steps. Violence centered in areas where the rightists usually deploy their forces, leaving many questions about May 1 unanswered.

Will the right wing make an attempt to insert itself into the [Bolivarian] mobilization announced for tomorrow [May Day] to create a scenario of greater violence? Is there another [right-wing] group within the FANB willing to lead an action following this outcome? What was the [plotters’] final objective? Donald Trump himself claimed to be following events closely.