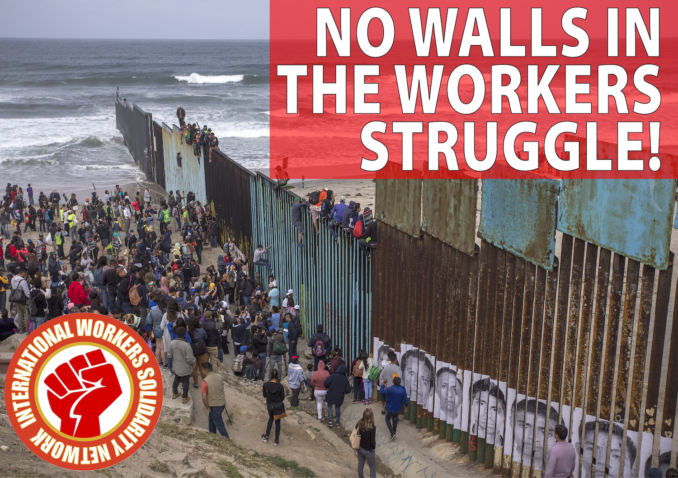 “This is not the end but only the beginning of the struggle.”

These words were spoken on May Day. The year was 1890. The speaker was none other than Eleanor Marx. Seven years after her father’s death, she was carrying the torch passed on to her by the beloved leader of the working class, Karl Marx.

May 1, 2019, has to be seen in the same light by the torch bearers of today: as the beginning of the next phase of the class struggle.

The appeal for monthly action states in part: “Among the many challenges to global working-class solidarity is a vile campaign by billionaire politicians like Donald Trump to divide workers on the basis of racism, sexism, xenophobia, ableism and anti-LGBTQ2S oppression.

“Trump’s war on immigrant workers is a war on the entire working class. The wall he wants to build on the border is a wall to divide workers.

“But we know there are no walls in the workers struggle! We must say this to the ‘Trumps’ playing the same game on every continent in the world.

“The message must be spread: Every struggle is a workers’ struggle. That includes students striking against climate change, young activists marching against racist police terror, women and gender-oppressed people rising up and saying, ‘Me too,’ and people with disabilities fighting for their rights.”

The network has proposed June 1 as the first Workers’ Solidarity Day, while urging we take any opportunity for solidarity that comes up before then. There’s no break in the class struggle even though May Day is over!

For instance, a Solidarity Day could be organized on May 8 in the eight U.S. cities where drivers working for Uber and Lyft will stage job actions. RideShare Drivers United has called for “Apps off” from midnight to midnight.

Wherever the drivers rally, the Solidarity Network will be there. The network has also called a demonstration on Wall St. May 8, the day that Uber begins to sell its shares on the New York Stock Exchange. Drivers are facing pay cuts, but in the eyes of potential stockholders that just means more profits.

These exploited workers can’t wait — and aren’t waiting — for entrenched labor bureaucrats to figure out how to organize new workers in the gig economy. This courageous job action follows walkouts by Amazon workers and the global walkout against sexual harassment and racism by Google workers.

This is not to say that labor unions are outmoded or no longer have a role in the class struggle. Militant strikes by education workers, hotel service workers, retail and grocery workers demonstrate just the opposite.

But what is needed right now is a global movement of the entire working class, organized and “unorganized” labor encompassing the most oppressed and exploited workers.

This is the perspective behind holding monthly Solidarity Days. Solidarity with im/migrant workers will be a major theme, with “No walls in the workers’ struggle” the rallying point. Actions will also honor LGBTQ2S Pride month in June, celebrating the 50th anniversary of the Stonewall Rebellion.

Workers’ Solidarity Day is about tearing down all the walls that divide workers — from the physical border wall Trump is demanding to the walls of racism, misogyny and all forms of bigotry.

The working-class movement must discard the notion that the growing numbers of precarious workers are “too hard to organize.” That was not Marx’s view when he wrote in 1848: “The increasing improvement of machinery, ever more rapidly developing, makes [workers’] livelihood more and more precarious.”

Marx saw the working class as the only class that could put an end to class exploitation and lay the foundation for a new society where human needs come first.

We need to turn our face to the billions who comprise our class. Regular monthly Solidarity Days — and showing solidarity whenever and wherever it’s needed — can move us forward.

As Eleanor Marx said, “We must speak for the cause daily, and [so] make the men, and especially the women that we meet, come into the ranks to help us.”