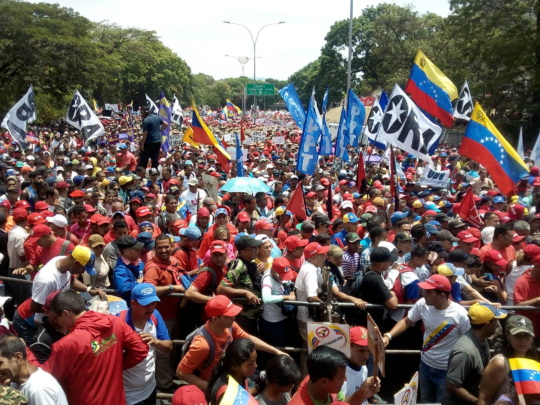 Teruggi is an Argentine journalist and political analyst living in Caracas. Taking into account that it is impossible to have confidence in any of the statements from the White House from the gang of liars carrying out U.S. policy toward Venezuela, and the completely biased reporting in the corporate media, WW editors have given priority to publishing online Teruggi’s and other authoritative articles from progressive journalists in Latin America. The original of the article below was published in pagina12.com.ar on May 2. Translation by Workers World managing editor John Catalinotto.

Tensions minute by minute, statements, social networks — People here experienced May 1 as a continuity of what started on April 30. The right wing had announced that this date would be the beginning of the definitive moment of “Operation Freedom,” a phase that finally was put in motion in the early hours of April 30 with images that went around the world. First, [presidential pretender] Juan Guaidó announced that the mobilization would take place starting from several gathering points. The question was: What would the rightists try to do in view of their need to maintain the gambit after the failed coup?

The day began calmly. Guaidó spoke after noon, and, as he is accustomed to in his speeches, he referred to the need to not lose the street, to remain mobilized, as well as the plan to begin a staggered strike until a general strike [developed]. His supporters expected a radical change that never happened. The pathway after his speech was blurred, particularly because it is not the first time that he announced a strike that later fails to take place, and because — that is the reason — Guaidó’s active social base has no strength among the workers.

The rightist activities took place in several points at the same time. The epicenter was again the wealthy Altamira neighborhood, with a greater presence than yesterday. There, episodes of confrontation occurred as part of the scenario the right wing planned because it needs to maintain tension to generate images and news.

The opposition did nothing else during the afternoon. The other rightist leader, Leopoldo López, kept silent from the Spanish embassy, where he had sought refuge. In Guaidó’s meeting the question was heard about the whereabouts of López, the fugitive leader of Voluntad Popular (VP), the party to which Guaidó belongs. VP is at the forefront of the coup d’état at the national level along with Primero Justicia, the party of Capriles Radonski and Julio Borges. Guaidó did not give answers about López, who is a major player in the local strategy of the plan of attack.

The international gang was also in motion: Mike Pompeo, U.S. Secretary of State, met with his Russian counterpart, Sergey Lavrov, to discuss Venezuela, and the U.S. interim Secretary of Defense cancelled his trip to Europe because of the crisis in Venezuela. President Donald Trump threatened yesterday a complete blockade of Cuba if the island does not “withdraw its troops and militias” from Venezuela.

The U.S. special envoy for Venezuela, Elliot Abrams, said that the Chavistas with whom he negotiated “have turned off their cell phones.” This was in line with the statements made by National Security Advisor, John Bolton, who said on April 30 that several high-level leaders in Venezuela had already backed his plan, but in the end had never acted.

The first of May was also a day of mobilization of Chavismo. As it is every year, the march was big, in a new demonstration — as it was yesterday and has always been since the beginning of January — of the street capacity of the Chavista movement. The final rally took place near the Miraflores Presidential Palace, where several leaders spoke, as well as President Nicolás Maduro.

Maduro calls on mass organization to take the streets

In this context, Maduro referred to the current situation of attack by the U.S. and its allies, and made an appeal in the event of an assault on the government by those attempting to carry out the coup d’état: “Let all the local supply and production committees, communal councils, Bolivarian militias, Hugo Chávez battle units, the people in the street, take to the streets, do not hesitate for a second.”

Maduro also announced that there will be days of dialogue, action and proposals on the weekend of May 4 and 5 together with the different structures of popular power, the United Socialist Party of Venezuela, and the governors. The objective: to inform Maduro what needs to be changed, to draw up a plan to correct any errors.

The first of May ended with a surface calm and many questions. What are the next steps in the attempted overthrow? What was the objective of the April 30 announcement? Was it a test balloon to measure relative strength? An action that in essence failed? A change of leadership so that Leopoldo López comes into play?

The next few days, weeks, will give more answers to these questions. The coup agenda continues and the U.S. plan that seeks a rapid outcome remains in motion, works at all levels, seeks internal breakdowns that are manifested the day they are put in play. In that sense, the most relevant event of April 30 seems to have been the removal of the now former director of the Bolivarian Intelligence Service.

Venezuela continues in unstable equilibrium, [with] the assaults faced by Chavismo, the inability of the coup strategy to achieve the outcome at the same time as the wear and tear caused by the economic situation and the impact of destabilization operations. The situation seems far from having a close resolution point.

Here is a link to another reliable report from Caracas from FightBack News: tinyurl.com/y5zxj49q