May Day 2019 marks the 100th anniversary of what became known as the “Cleveland May Day Riots.” The only “rioting,” however, was by police and vigilantes targeting “reds” (term includes all radicals). By the end of the day, 200 people were injured, two fatally. 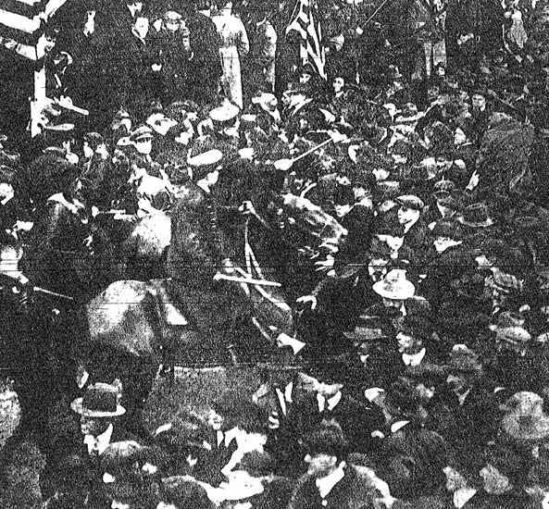 The year 1919 was one of fierce class battles. There were strikes across the U.S in steel, auto, coal, textile and other industries. Seattle saw a five-day general strike in February. The working class was inspired by the workers’ revolution in 1917 that was establishing the Soviet Union.

May Day itself indicated the temperature of class struggle in the U.S. Marches were called in cities and towns from coast to coast. Many protests were organized in Ohio, not only in Cleveland — the fifth largest U.S. city with almost 800,000 residents — but in Akron, Toledo, Youngstown, Warren, New Philadelphia and even Sandusky, population 23,000.

The ruling class was hell-bent on squashing every semblance of “Bolshevism” that could possibly threaten its political grip. Newspapers ran scare headlines: “Reds plan to overthrow U.S. on May Day” and “Reds plan murders on May Day.” Demonstrations were prohibited in many cities. Sandusky organizers were unable to rent a hall; police blocked a parade in Youngstown.

The Cleveland May Day demonstration, drawing 30,000, was one of the largest in the country and the biggest protest in the city’s history. Marches from four different contingents, from both sides of town — the Cuyahoga River divides Cleveland east and west — were set to converge downtown on Public Square. However, a Victory Bond rally was also planned in Public Square on May Day, featuring Seattle Mayor Ole Hanson, who had denounced the recent general strike as Bolshevik-inspired.

Victory Bonds were essentially war bonds sold during peacetime — World War I was over — to “defend” the U.S. against an imaginary Bolshevik threat. Bond rallies, which pulled in many returning soldiers, were used to mobilize popular sentiment against “reds.” The Cleveland Press and the Plain Dealer, the city’s two major newspapers, promoted the bond sales on a daily basis.

This split carried over into the U.S. Socialist Party. When WW I ended, the SP remained split, with the revolutionary left wing in support of the Russian Revolution. The Socialist Party was strong in Ohio, particularly in Cleveland, with the anti-imperialist left wing predominant. Cleveland organizer Charles Ruthenberg and other Ohio SP leaders had been jailed for opposing the war.

Eugene Debs, a frequent SP presidential candidate, visited Ruthenberg in jail in Canton where the SP was holding its convention. On June 18, 1918, Debs spoke to a large enthusiastic crowd across the street from the jail. His speech was fiercely anti-war and anti-capitalist, and supported the Bolshevik Revolution.

For this speech, Debs was arrested June 30 and charged with violating the federal Espionage and Sedition Acts (1917-18). The acts criminalized anti-war speech and allowed for imprisonment of up to 20 years. A Cleveland jury convicted Debs and sentenced him to 10 years in September 1918.

Debs continued to speak publicly while he appealed his case to the U.S. Supreme Court. Many of the May Day marchers were inspired by his March 19, 1919, speech in Cleveland. With the triumph of the Russian working class, Debs said, the worker was “beginning to think. That is Bolshevism! That is the revolution in Russia! That is the beginning of the end of capitalism and the end of the beginning of socialism.” (marxists.org)

On April 12, after losing his appeal, Debs was taken to federal prison in Atlanta. “Free our comrade Gene Debs” was a common May Day sign. Other signs supported Tom Mooney, a Socialist Party leader in California who was wrongfully imprisoned for a bombing at a pro-war parade in San Francisco.

Attack on May Day

On May Day, a series of violent attacks on marchers began about half a mile from Public Square, after a contingent left the SP’s downtown headquarters.

Pro-socialist soldiers in uniform were in the lead, carrying red flags. They were met by a hostile group of soldiers and civilians. When a lieutenant demanded the red flag be lowered, the socialist soldier refused. When the lieutenant attempted to confiscate the flag, a big fight broke out.

The marchers were beaten with clubs as mounted police moved in, and half of the march was prevented from reaching Public Square. On the square a German tank, confiscated by U.S. troops during the war and used for Victory Bond propaganda, was commandeered by Cleveland police and used to disperse the crowd.

Fighting between the two sides — ​with police anything but neutral — ​continued in several parts of town throughout the day.

The right-wing mob, having shut down the May Day demonstration, then destroyed the SP’s headquarters and tossed typewriters, furniture and other property out on the street. The red flags they seized throughout the day were burned in a huge bonfire on Public Square.

During the fighting, police fatally shot 17-year-old Samuel Pearlman and 38-year-old Joseph Ivanyl. Ambulances were called to the scene for the most seriously injured; several dozen were sent to the hospital. Scores more suffered lesser injuries.

Of the over 120 arrested, all were with the march, save for a few bystanders — ​but not a single “loyalist.” Most marchers were charged with a misdemeanor, “disturbance” and sentenced to 30 days. But SP leader Ruthenberg faced bogus charges — ​later dropped — ​of “assault with intent to kill.”

Scapegoating the radicals, the city then prohibited all outdoor political activities by the SP, banning red flags and ribbons. Cleveland police announced plans to purchase up to six tanks “to disperse any mobs.” (Cleveland Plain Dealer, May 4, 1919) The city prosecutor proposed limiting the sale of socialist literature to counter the party’s influence and deprive it of income.

City governments elsewhere took similar repressive measures, including banning red flags. While Cleveland witnessed the most serious anti-socialist violence, these incidents were not isolated. Soldiers and sailors attacked the SP headquarters in New York City, where members were celebrating its opening. Police attacked parades in Boston, Detroit, Chicago and elsewhere.

Eastern European immigrants —​ the vast majority of those arrested — ​were subjected to xenophobic threats and bias. At sentencing, they were told they would be deported upon release. The Plain Dealer harped on the fact that only a handful of arrestees were U.S.-born.

The composition of those arrested showed that the march attracted a broad cross section of the city’s population. They came from Poland, Hungary, Germany, Greece, England, Italy, Russia, Sweden, Lithuania, Serbia and other places. Many were Jewish. Their addresses were spread out across the city and included neighboring suburbs.

Ruthenberg wrote in “Revolutionary Age,” “The Socialist organization remains intact in spite of the destruction of party headquarters. … The workers have had their lesson. They have learned how ‘democracy’ meets a peaceable protest. They know from the thousands who marched that their power is greater than ever.”

The Cleveland SP chapter grew following May Day. The Plain Dealer admitted that Victory Bonds sales weren’t meeting their goal. All was not well for the capitalists.

The Palmer Raids, begun in 1919 by U.S. Attorney General A. Mitchell Palmer and carried out by future FBI Director J. Edgar Hoover, inflicted terror on thousands of socialists, communists and anarchists. Repression continued with the frame-up and eventual execution of Italian immigrant anarchists Nicola Sacco and Bartolomeo Vanzetti on Aug. 23, 1927.

Despite the political climate induced by the “First Red Scare,” in 1920 Eugene Debs ran for president from his prison cell and drew almost a million votes. Ohio was dubbed the “red state” after casting almost 90,000 votes for Debs and Ruthenberg, the SP’s gubernatorial candidate.

A year later the new U.S. president, Warren Harding, commuted the sentences of Debs and other political prisoners to “time served.” Debs died five years after his release, at the age of 70.

Ruthenberg was part of the grouping that eventually left the SP to form the Communist Party of America; he became its first executive secretary. In 1927, when he was only 44, he died suddenly of appendicitis. Ruthenberg is buried in the Kremlin along with only two other U.S. citizens: author John Reed and labor leader “Big Bill” Haywood.

In 2019, Cleveland May Day will commemorate the people and events of 100 years ago. As the Committee for 100 Years explains, “The issues being protested 100 years ago are still deeply relevant today: for justice in immigration, in opposition to war and police brutality, and against capitalism.”