“This government does not consider Black people to be citizens. It was so blatant. We were kicked out in the snow in Canada, a foreign land, where we changed planes to make a trip from New Orleans to London,” reported Krystal Muhammad to the media after a trip to London was denied. 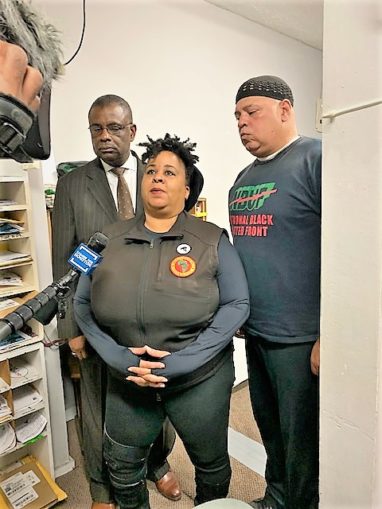 Muhammad, the national chair of the New Black Panther Party, and two other NBPP leaders, had tried to fly from New Orleans to London for a special showing of a film about their organization called “What Are You Going to Do When the World Is On Fire?”

The film was featured in film festivals across the world and won best film in 12 countries on three continents.

In Toronto, Muhammad was told her passport was not in order and to go to the U.S. Consulate to get another one. The consulate threw Muhammad out after she presented the proper documents and got a new passport. Yet the new passport was also denied. After four days the trio had spent thousands of dollars for hotels, passports and transportation in Toronto.

They missed the event in London, although they were Skyped in for the Q&A session. Then they tried to fly home.

They were denied entry to the U.S., lied to and told they were on a “No Fly List.”  They only got home because veteran U..S Congressperson Sheila Jackson-Lee intervened. Jackson-Lee had been in constant communication with Muhammad during this whole ordeal.

“Government harassment was partly caused when the Southern Poverty Law Center wrongfully labeled us as domestic terrorists. It intensified when the Department of Justice falsely declared the NBPP as Black Identity extremists. We are being double labeled because we stand up and show dignity. Because we have no fear of our open enemy. And because we encourage other people to stand up. This is what the U.S. government is trying to stop,” Muhammad told the media.

Muhammad told Workers World that she and the organization are now intent on finding legal representation to sue all parties involved in this racist and COINTELPRO-type ordeal. They are waiting for a reply from the American Civil Liberties Union and are contacting other legal organizations and civil rights attorneys. “We plan to sue for reparations everyone from Air Canada to the State Department to Homeland Security,” she declared.