Education workers at the University of Mississippi have struck an effective blow at the anti-union laws of that “right-to-work-for-less” state. In November they formed the United Campus Workers of Mississippi and affiliated with the Communication Workers (CWA), an international union that serves as its parent organization. 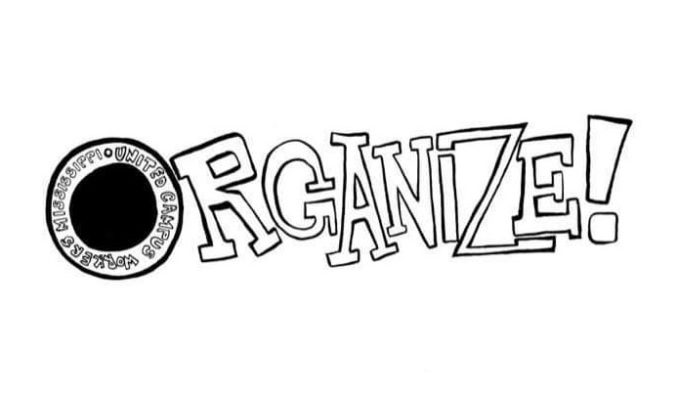 This historic step, taken at UM-Oxford, established the first higher education union in Mississippi. Significantly, UCW was launched at the flagship campus of the state system. UM-Oxford is the school still called “Ole Miss” by some who cling to the past — a sexist and racist reference to a white plantation owner’s wife and her relation to enslaved workers of African descent.

The union’s mission statement reads: “United Campus Workers of Mississippi unites Mississippi’s diverse workforce — including part-time and full-time staff, faculty and student laborers — to address the critical issues we all face. Our mission is to champion and defend the interests and well-being of all University labor, as well as to build and sustain social and economic justice in our workplaces and in our communities.” (UCW MS Bylaws, March 2019)

In Mississippi, state statutes bar public institutions from entering into collective bargaining agreements with public employee unions. The statutes also ban strikes by public employees. UCW was created as an innovative strategy to counter such hindrances to worker organizing.

The UCW is a “wall-to-wall” union. That means any one who receives a paycheck from the state of Mississippi as a worker at a state college or university is eligible to join the UCW — from groundskeepers, student workers, graduate teaching assistants to full professors.

Most colleges divide workers into many categories within which workers have extremely varied job security and unequal benefits. Wall-to-wall membership is a powerful, effective tactic to build worker solidarity to counter these divisions. It’s also a very effective organizing strategy in the anti-union South.

UCW organizer Jessica Wilkerson noted that one key issue for workers is low pay. Many employees make only $16,000 to $20,000 annually, less than the cost of living for families in the surrounding community. Some university workers also report that they are not treated with respect or afforded dignity on their jobs.

In a Nov. 29 interview with the Daily Mississippian, Wilkerson said: “People hear ‘union,’ and they think wages and benefits, but we have a broader mission than that. We want to build and sustain social and economic justice in our workplaces and in our communities. If you come to work and feel unsafe because of racism, sexism or homophobia, that’s a labor issue. That would be something, as a union, we would want to address.” Wilkerson is an assistant professor of history, researching Southern labor and working issues.

The UM campus has been the site of many struggles against injustice. In the 1940s, when segregation was still legal, Black women who were laundry workers at UM struck to protest brutal working conditions and low pay. Though without a formal union, they won a raise and better hours, along with fans and improved ventilation in stiflingly hot laundry rooms. (Sally Palmer Thomason, “Delta Rainbow,” 2016)

As UCW was forming last November, a student-led mobilization worked to remove a Confederate statue from a featured campus location. The statue has served recently and historically as a rallying point for white supremacist groups, including during the desegregation of UM by Black U.S. veteran James Meredith in 1962. The student campaign succeeded in uniting all four UM governing entities — undergraduate and graduate students, faculty and staff — in voting a resounding “No!” to the statue. (Workers World, March 11)

UCW organizer Wilkerson commented in an email to WW that, with all the stepped-up organizing, there are “more connections across campus, allowing campus groups committed to fairness and justice to become stronger, as we build networks and communicate more effectively across campus ‘silos.’”

Thousands of teachers and staff who rallied behind the slogan “Red for Ed” also engaged in what were essentially strikes in Oklahoma and Arizona. The energy and tactics of these worker actions have spread beyond the South from California to Colorado and beyond.

All these actions first began with educators building worker solidarity, engaging in local organizing that involved their communities and embracing different kinds of social justice issues as well — including defending the right to a public education for children of color, disabled children, rural children and LGBTQ children.

Now UM education workers are taking up the challenge to build an effective wall-to- wall union in Mississippi to bring equity and justice to workers in the state’s higher education institutions.

Organizer Wilkerson first became acquainted with the UCW strategy for mobilizing education workers in higher education in Southern right-to-work states when she was teaching at a community college in Tennessee. UCW-CWA was initially founded at the University of Tennessee-Knoxville as the result of a living wage campaign.

CWA organizer Karly Safar provided this background to the Daily Mississippian: “Custodians that worked in the dorms, in alliance with professors and students, launched a campaign for the university to pay all employees a living wage. From there, they expanded to community colleges and most of the public higher educations in Tennessee.” (thedmonline.org, Nov. 29, 2018)

UCW-CWA presently claims 1,800 members across 16 campuses in the state of Tennessee, with branches in Georgia and now Mississippi. Its work has centered on social and economic justice issues, like fighting privatization of campus services and lobbying legislatures for pay raises, expanded health insurance and pension reform. (ms.policy.org)

U. of Miss. education union advances

Ellie Campbell, who is public services law librarian at the university’s Grisham Law Library, updated WW on developments in UCW since it was chartered at the end of 2018. She noted a steady growth in membership to its current total of 84.

UCW has also been doing outreach to bring in more members and to research the most pressing issues for education workers in Mississippi, specifically on the UM-Oxford campus.

The Campaign Committee is scheduling campus lunches, which coincide with clock-out time for the facilities maintenance staff, to hear from them about work issues and problems. The UM-Oxford “local” of UCW was started mainly by faculty and white-collar workers, so current efforts are devoted to reaching groundskeepers, facilities staff, and janitorial and housekeeping staff. These workers are in jobs that are the most precarious and lowest paid, with the fewest benefits.

Campbell noted that so far key issues include low wages — the biggest problem for everybody — as well as a bad leave structure, with no paid maternity leave and sick leave that must be “earned” instead of being automatic upon hiring. There are limited grievance procedures on campus. If anything goes wrong at work, the only help is hard to access and inadequate through Human Resources.

All these issues, as well as the continuing input from campus workers, are being considered as the UCW plans its first campaign.

Campbell said of her own USW membership: “I’m originally from Anniston, Ala., and that’s not exactly union country; it started as a company town [for an iron works]. I’ve never been part of a union before. It’s really exciting to work together with people across campus to make this place better for everyone. There are a lot of problems here, but there are a lot of people who want to change that. It’s heartening to see the support [for UCW] as people find out about the union, come out to meetings and workshops, and join.”