The following is Part 2 of an excerpted talk given March 21 at a Workers World Party meeting in New York City. The writer, the co-director of the International Action Center, was part of the March 9-18 delegation to Venezuela organized by the U.S. Peace Council.

Venezuela’s conflict with imperialism seems to be entering a prolonged siege, where the masses’ ability to organize and develop domestic agricultural production will be tested.  The government’s response is to reach deeper for more radical measures and find those that draw new layers of the population into political life.

Since I’m a gardener, I met with the Minister of Urban Agriculture, Mayerlin Arias, and her staff. Venezuela is the only country that has an entire government ministry focused on rapidly developing urban agriculture. 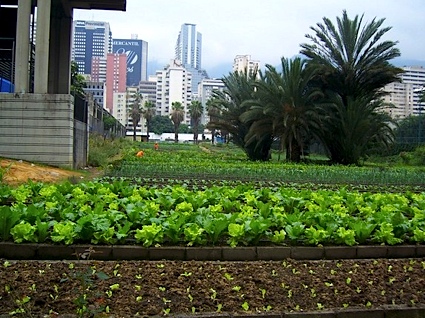 Urban agriculture to feed the people

Microgardens are producing 25 percent of Venezuela’s food needs this year, using backyards, rooftops, vacant lots and small greenhouses covered with plastic tarps. It is projected they will produce 50 percent of the people’s food needs for the next three years.

Venezuela is near the equator; it has a warm climate and the ability to produce three or four crops a year. The challenge is that the population is 89 percent urban. In the past, the country imported more than two-thirds of its food. Agricultural production depended on imported seeds, feed and supplies from U.S. agribusiness corporations. Recent efforts aim to break free of relying on these imports.

The program of developing urban gardens has the ability to solve an immediate challenge. Thousands of small urban gardens are cutting out the wildly overpriced and corrupt underground market and the distribution networks of warehouses, supermarkets and shipping conglomerates — which are controlled by Venezuelan capitalists who are part of the anti-Maduro opposition and aligned with corporate U.S. They have used every trick to create continual shortages of essential goods.

Urban agricultural production is 100 percent organic and sustainable — as are larger farming efforts. But as the staff at the ministry explained, this level of production requires the latest scientific advances and specialized technical expertise.

The Venezuelans are learning from Cuban, Vietnamese and Korean cadre who developed survival microfarming for their populations using small, diversified agricultural solutions while dealing with near-famine conditions created by U.S. wars and sanctions.

Plans include planting gardens up to 1 acre on rooftops and in backyards and up to 3 acres in empty lots. The goal is to attain self-sufficiency in food production.

We visited the crowded mountainside barrio of Catia in West Caracas, once one of the poorest favelas where 1.5 million people live. In one community grouping of about 200 families, there are extensive gardens, raised beds, tubing for drip irrigations, rain barrels, hoses, pumps and five large greenhouses.

Animal protein has suffered the highest inflation-based price hikes. So a project has begun for families to raise rabbits. A community council member who heads the project explains that rabbits are easy to raise.  They eat vegetable scraps, provide high protein and reproduce quickly.

The plan also includes providing milk-producing goats for families with children. Chickens will also be raised to produce eggs and animal protein. Fish farms are being developed. Already more than 260 large fish ponds provide protein and ingredients for fertilizer.

We visited a downtown garden in front of a large apartment block where beets, peppers, herbs, tomatoes, black beans, pumpkins, sweet potatoes, melons, mangoes, lettuce, and other vegetables and fruit were grown.

Breakfasts and lunches are served at schools and workplaces.  Teaching new, healthier eating habits, especially to youth, is another goal. One gardener told us: “We’ve gone from malnutrition to obesity with government food distribution programs. But now, especially for our children, we need to stress healthy eating.”

Teaching every neighborhood how to produce basic foods empowers the population and mobilizes each community to participate in shared projects and basic decision-making. It gives people confidence that children’s food needs can be met.  Also, it’s essential in preparing the people to counter further sabotage by the U.S.

But there are many essential needs that can’t be met by backyard gardens. To counter these shortages, the Bolivarian government has established a distribution network that serves 6 million families by importing food, medicine and hygiene products.

Compare this situation to that in the U.S:  Despite a well-developed infrastructure and enormous food surpluses, 41 million people go hungry every day, according to Move for Hunger.

Keeping everything running is based on the collective determination of the local community councils. They make the decisions about community projects, gardens and distribution of CLAP boxes.

We visited two of the larger barrios where there appeared to be 100 percent support for the revolutionary process. A big accomplishment of the early days of the Bolivarian Revolution was to break the forced isolation in these working-class suburbs. Districts that were once the worst shanty towns now have roads, sidewalks, storm drains, electricity, plumbing, stucco paint and new roofs on houses, medical clinics and schools.

The district of Catia, home to 1.5 million people, was not even shown on  city maps before the Bolivarian Revolution. The city didn’t acknowledge its existence — and therefore provided no services like electricity or plumbing. Catia’s population did not vote and was not counted in political representation.

We also visited the formerly poor historic January 23 neighborhood. Perched above it is the burial site of the late revolutionary leader and former president, Hugo Chávez, in a military museum.

The community councils and communes stem from a revolutionary concept that is being applied in Venezuela as a way of life. The idea of direct democracy was first advanced in the 1871 Paris Commune and in the soviets (elected councils in the former Soviet Union). In Venezuela a community council is a self-organized group of about 200 families, which applies for government recognition. They are based in all poor and working-class communities.

Direct government aid is distributed through the councils. People are elected to them, and eight to 10 community councils make up a commune. There are 500 communes, and unions, collectivos, militia units and women’s committees are also represented in the communes. The councils then elect commune representatives to the National Constituent Assembly.

The councils and communes have created a functioning popular power base and network throughout the country, which can tackle immediate problems. They coordinate their efforts to find workable solutions to the shortages that the imperialists have created through internal sabotage in their effort to create chaos and confusion. Involving everyone in problem solving empowers the population and energizes the people to meet the historic challenges they face.

People’s militias — armed groups from among the masses — function through these organs of popular power, in coordination with the Bolivarian National Armed Forces.

Right to housing is a reality

The achievements in housing are impressive, especially compared with the situation in the U.S. where there is a permanent housing crisis.  The U.S. population is 10 times that of Venezuela’s, yet it has a total of only 1.2 million low-income housing units.

Since 2016 the Maduro government has built 2.5 million new housing units throughout the country, which can accommodate almost one-third of the population. This housing construction was also a major jobs program.

This is despite recent U.S. sanctions that have severely limited supplies of hundreds of essential parts used in modern housing construction.

We met with the vice minister of peace. His department deals with creating social peace in urban neighborhoods. It had to do intensive work in 2017 at the peak of the street violence created by the opposition. As in many countries, including in Latin America and the U.S., gang violence, street crime and drugs can pull in alienated youth — unless there are community-based programs.

The Venezuelan government is also building vertical gyms around the country. Each gym has space for 17 sporting activities, music, theater, dance and martial arts. There are also meeting rooms and health centers, and there is access to WIFI. Using hip hop, theater and all forms of culture, the Bolivarian government seeks to raise the level of social involvement.

Venezuela is very proud of its doctors and medical technicians as well as  Cuban medical doctors, nurses and technicians.

The sanctions first imposed by President Barack Obama in 2014 have made it difficult to obtain necessary pharmaceuticals and medical equipment.

Sanctions have resulted in an 80 percent decline in imports of essential medicines.

Even treatments for such common health problems as diabetes, cardiovascular disease, asthma, epilepsy and cancers are suddenly facing medicine shortages. The same is true of basic diagnostic tests. These medications, formerly imported at government expense, cannot be purchased due to cruel U.S. sanctions. This is a war on an entire people.

Venezuela faces many other problems. The wild hyperinflation of 3,000 percent has made money useless for many transactions.

Yet the government is making advances for the people.  Transportation is now accessible to the masses. The metro is free.  So is gas for cars and buses. Electricity and water are free. Food distributed through the CLAP program and the community gardens are very low-cost — nearly free.

The meetings with officials, community councils and neighborhood people confirmed that the revolutionary process is moving forward. Profound changes have been made through a revolutionary approach to meeting people’s needs.

Venezuela needs material support from countries around the world. The essential aid that is arriving is a lifeline, helping to combat the cruel sanctions. Venezuela especially needs political solidarity from the world’s people to push back U.S. imperialism’s war plans. This is our responsibility.