Herrera, a Marxist economist, a researcher at the Centre national de la Recherche scientifique (CNRS), who works at the Centre d’Économie de la Sorbonne, Paris and who often contributes guest articles to Workers World, wrote this article for Unsere Zeit, the newspaper of the German Communist Party. WW staff translated it. 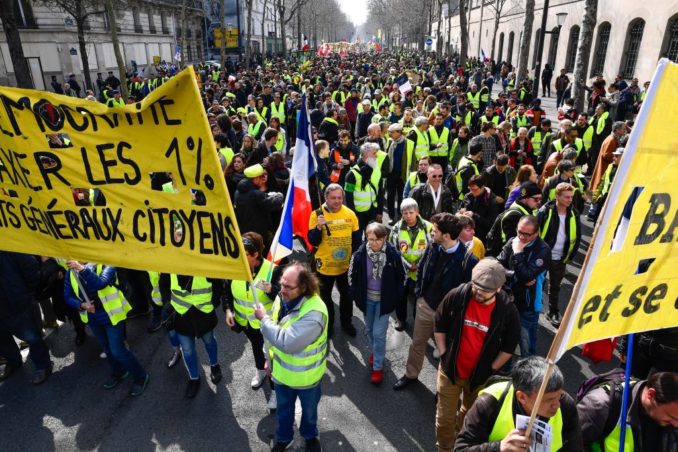 March 29 — It was a good day for everyone, both the Yellow Vests and the President of the Republic. March 16 was sunny. Yellow Vests could demonstrate without rain; Macron could decompress and tan. So in the afternoon, while clashes between rioters and police were raging in many cities of the country for the 18th consecutive Saturday over four months during the latest mobilization of Yellow Vests, Mr. Emmanuel Macron, competitive skis on his feet and trendy sunglasses on his nose, was hurtling down the slopes of La Mongie, a chic winter sports resort in the High Pyrénées.

A week earlier, on March 9, just after the “Act 17” of Yellow Vests, the Minister of the Interior, Christophe Castaner, was surreptitiously photographed chugging shots of vodka and kissing a young woman (only faintly resembling his wife) in a trendy nightclub in Paris.

On Sunday, March 17, in the evening, the bizarre Alexandre Benalla, ex-presidential bodyguard in trouble with the law, who has been placed under judicial control since his release from prison, was seen and filmed, hookah in one hand and glass of champagne in the other, at the side of the sumptuous swimming pool in Nikki Beach, a luxury hotel in Marrakesh, Morocco.

Is all this an uncensored scene from an ongoing Hollywood soap opera? No, just the sorry spectacle of the occupants of the state’s highest levels in today’s France.

What else? The Alexis Kohler affair. Kohler is a secretary general of the Elysée (Presidential office). An anti-corruption association (Anticorp) has filed several complaints against him for “unlawfully taking sides, trading in influence, passive bribery” and “major conflict of interest” in a case which is still in the courts. It involves the MSC company (the world’s second largest cargo shipper, whose owner is none other than Kohler’s cousin), the shipyards STX and the government, and even the city of Le Havre (where current Prime Minister Édouard Philippe was mayor).

Then there is the case of Bernard Mourard, a former special adviser to Emmanuel Macron in charge of fundraising during his election campaign. Mourard is a former banker at Morgan Stanley, president of Altice (the media group of business magnate Patrick Drahi, which owns, in addition of the telecommunications company SFR, a good part of the most influential newspapers and television channels in France). Mourard, today director of Bank of America Merrill Lynch in Paris, was just appointed to oversee the Agency of State Participation in its privatization process of Paris airports.

There is the new Police Prefect for Paris (the capital’s top cop), Didier Lallement — reputed to be “muscular” and “ruthless” — who was appointed on March 21. He will replace his predecessor who was fired for “dysfunctions” in the “management” of the excesses during Yellow Vest mobilizations. He will soon be questioned in the framework of an investigation by the National Financial Prosecutor’s Office and the Economic Crimes Brigade on suspicion of favoritism in awarding contracts. This stems from when Lallement chaired the Bid Review Committee for the construction of the Greater Paris Metro — the largest (and most expensive at 37 billion euros or $41.4 billion) construction site in Europe.

What more can you say? Except that the Senate, with a rightwing majority, has decided to take on a number of high-profile cases to court (for “false testimony” before a parliamentary committee): Alexandre Benalla’s cases as well as those of his sidekick Vincent Crase, former reserve officer of the Gendarmes accused, like Benalla, of brutality; the cases of three other close associates of President Macron at the Élysée: Alexis Kohler, already mentioned; Patrick Stzoda, cabinet director of the Presidency; and Lionel Lavergne, head of the Presidency’s Security Group. This is only the second time that such a procedure has been initiated under the Fifth Republic.

The Secretary of State to the Prime Minister and government spokesman Benjamin Griveaux resigned on March 27.

All are, of course, presumed innocent — assuming that one fine day justice should be done.

And the protests continue

On March 16, tens of thousands of Yellow Vests were still demonstrating throughout France. Sometimes alongside them, sometimes at the same time, there were additional tens of thousands protesting other issues: trade unionists (CGT in the lead), ecologists from the Mobilization for the Climate (the “Walk of the Century”), college and high school students, members of neighborhood associations, undocumented workers and wheelchair users. Together they represented a “yellow-red-green convergence.”

At the Place de l’Etoile in Paris, from 10 a.m. on, clashes occurred with the police. Le Fouquet, an emblematic restaurant on the Champs-Elysée, a symbol of luxury and the headquarters of the Parisian jet set (where Nicolas Sarkozy celebrated his 2007 presidential election victory), was ransacked and burned. The exact origin of the “considerable damage” reported by the management of the establishment is still not determined.

And a few dozen meters away, on Franklin Roosevelt Street, a bank branch was burned. Vans of the gendarmerie were attacked; policemen were beaten up. Nearly a hundred stores were vandalized.

Some paving stones in the neighborhood were ripped up. A slogan, tagged on a wall, read: “Paving stones are our ballots!”

“32,000 protesters” were recorded in France by the police at the end of the day (against 28,000 the previous Saturday), including “10,000 in Paris.” That’s the same as the number announced by the Ministry of Interior a few days earlier at the Paris demonstration supporting Algerians who are demanding the departure of Abdelaziz Bouteflika. Ridiculous! It was enough to be on the street on March 16 to measure the great number of people mobilized.

On March 23, for “Act 19,” everything was calmer. And for good reason: The army was in place; the perimeter of the Champs-Elysée and the official buildings (Elysée, Matignon, the government ministries, etc.) was off limits to Yellow Vests. Their march ended this time at the top of Butte-Montmartre.

The answer of the Macron government? Always the same: repression. “The immediate dispersal of all gatherings” in places previously prohibited [reflected] “strong decisions”; police brigades were created to repress violent acts, “to go for contact.”

Here and there voices were raised. Certain instructions given to the security forces would have been patently illegal: The public prosecutor (appointed by the President) would push them to carry out provisional detention in order to deter a greater number of Yellow Vests from going to demonstrations. And the order to use flash bang grenades — which cause so many injuries — also came from the top.

In the media, the bourgeoisie’s hate-filled rage against rebellious wretches is intensifying. A president of the Republic turning the French army against the French people is not enough. On the right, Éric Ciotti, a member of parliament (MP) from the French Republican Party, demanded greater firmness of the government, including an outright prohibition of the right to demonstrate, plus the restoration of the state of emergency.

There you have it: An MP from The Republic on the Move (LARM) — the party of Macron — Claire O’Petit compares “Yellow Vests” to “terrorists.” The background information speaks of “ultra-yellow.” Another MP, Mohamed Laqhila (Modem), demands the dissolution of the departmental union CGT — too much agitating for his taste.

Parliamentarians from LARM proposed a bill to remove allowances paid by the state to people who have been arrested. And all those who, like the leaders of the Yellow Vests, call for illegal demonstrations will now fall under Article 40 of the Code of Criminal Procedure and will be accountable to the courts.

The “Grand Debate” initiated by President Macron finally ended with 160,000 “citizen contributions” officially listed on the site made available to the public by the government. This represents about a 0.003 contribution for each member of the French population over 18. The important thing, for Macron, was to make believe that we live in a democracy. A democracy in which, on March 23, a 73-year-old peace activist, charged by a policeman and badly wounded on the head, heard, from her hospital bed, Emmanuel Macron say that she should have had “the wisdom to stay home.”

The wisdom, sir, would be to change this world of bling-bling and money for your supporters and misery and clubbing for others.