“Uphold the legacy of women’s resistance! Women and gender-oppressed peoples are in the forefront of global fightback!” was the call of the International Working Women’s Day program held by the Boston branch of Workers World Party and the Women’s Fightback Network on March 22. 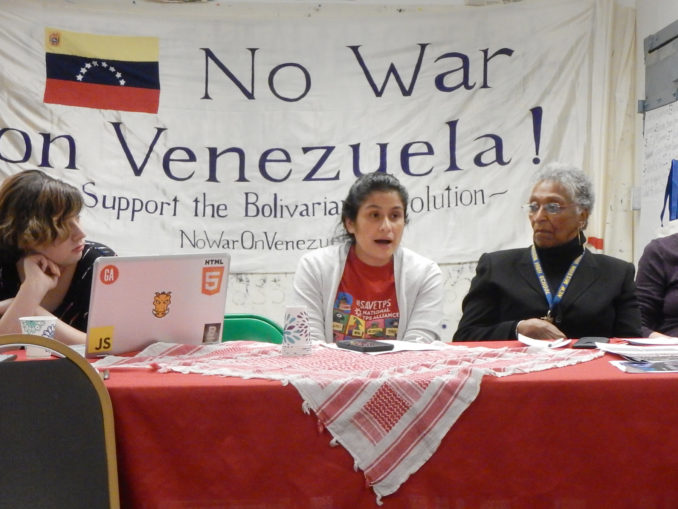 Some speakers at the International Working Women’s Day program were (left to right) Belladonna Ashman, Doris Reina-Landaverde and Dorotea Manuela.

Viewing war as an urgent women’s issue, the WFN was formed in 2001 in direct rejection of President George H.W. Bush’s call for endless war. The WFN called women and their allies into the streets to protest any U.S. military aggression, and continues its anti-imperialist work today.

Opening with the theme “Resistance, Remembrance and Revolution,” Phebe Eckfeldt, a retired Harvard clerical worker and unionist, a Visiting Nurse Association nurse and WFN leader, welcomed the audience and introduced the panel of speakers.

Doris Reina-Landaverde, a national leader with the Harvard TPS Coalition and union shop steward with Service Employees 32BJ, detailed the ongoing attacks on immigrants and undocumented workers: “Every door is closed to us. They don’t want to give us [driver’s] licenses. As a mother I have to drive for food and to get to work. Thousands of families are in the same situation. Our children are citizens and have a right to grow up with their parents. There are workers with TPS [Temporary Protected Status] from 13 nations who are facing deportation and the loss of our families and livelihood. This fight is for all of us!”

Next, Dorotea Manuela, a long-time Puerto Rican Independentista activist and leader of Boston’s May 1st Coalition, greeted the crowd: “I am an Afro-Latina Boricua member of the captured nation of Puerto Rico that remains a colony of the United States.” She dedicated her talk to fierce revolutionary women warriors, both well-known and unknown. She asked the crowd to remember the women who have fought for decent housing, welfare rights, to stop hospital and school closings, and to demand clean drinking water: “We are everywhere and we have to continue uniting and fighting for our liberation.”

Sara Flounders, co-director of the International Action Center, gave an exciting eyewitness account about Venezuela, having just returned from a solidarity trip that included meeting with President Nicolás Maduro. Flounders shared vivid examples of the Venezuelan people’s creativity and organized mass resistance involving unions, collectivos, schools and ongoing defense by workers from the farms to the oil fields. She also reported on the heroic struggle of President Maduro and the Bolivarian people’s government against U.S. imperialism.

Belladonna Ashman, a young trans activist and organizer with Stonewall Warriors and WWP, moved the crowd with her revolutionary working-class assertion that “trans women are as much a part of the women’s struggle as cis women. … Let us be who we are and let us define ourselves.” On how trans women suffer disproportionately, especially trans women of color, she emphasized, “Stop killing us!” Ashman pointed out that “reproductive justice needs to include the health needs of trans women.”

The Team Solidarity Singers, with Kristin Turgeon on lead vocals, opened and closed the evening with a rousing musical tribute to women leaders in struggles against slavery and colonialism. Then the crowd raised their fists and sang the words of The Internationale, the anthem of the worldwide communist workers movement. With steadfast optimism, they sang, “We have been naught, we shall be all!”