Houston, TX — The morning of March 17 saw dark black billowing smoke begin to cloud the skies of east Harris County, causing residents to wonder if a storm or hurricane was approaching. But this was no natural disaster. It was man-made, caused by ITC, Intercontinental Terminals Company’s facility in Deer Park, outside Houston. 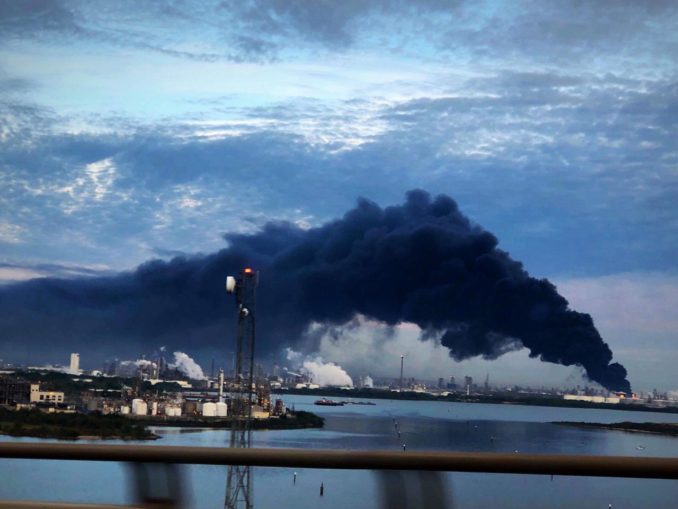 Several petrochemical storage tanks caught fire, and it took four days to put out the fires which spread to several more tanks. Then midweek, the fires reignited.

While the fires are now out, residents fear they could break out again. While company officials report no danger, residents don’t believe them. Thousands of people have gone to hospitals, clinics and emergency rooms for a multitude of symptoms from watery and itchy eyes to problems breathing and inability to keep food down. People with asthma have suffered greatly.

According to ITC’s web page, the Deer Park terminal “currently has 13.1 million barrels of capacity in 242 tanks.  It stores all kinds of petrochemical liquids and gases, as well as fuel oil, bunker oil and distillates. The terminal has five ship docks and ten barge docks, rail and truck access, as well as multiple pipeline connections.”

These fires are not ITC’s first offense. ITC has been out of compliance with the Clean Air Act nine out of the past 12 quarters. Since 2003 there have been 39 unauthorized air releases. In 2013, they released 10 times the legal limits of cyanide into the San Jacinto River.

The chemical tank fire occurred near Houston, the U.S. petrochemical capital. The blaze released chemicals commonly found in the production of gasoline, which can cause dizziness and headaches. Those symptoms were reported by residents in the area throughout the week, even though the Texas Commission on Environmental Quality daily downplayed the fire’s risk to the public.

The Houston Ship Channel is a 50-mile waterway that runs from the Gulf of Mexico through Galveston Bay and up the San Jacinto River, ending 4 miles east of downtown at the Port of Houston. According to a study by the University of Texas Health Science Center, children living within 2 miles of the Ship Channel have a 56 percent higher risk for childhood leukemia than those living over 10 miles away.

The Channel was shut down due to pollutants released by the fire. It won’t reopen until the U.S. Coast Guard verifies that cancer-causing benzene has dissipated in the air, and oily runoff from the area’s worst chemical disaster in 14 years poses no threat to vessels or their crews.

Oil refiners, chemical manufacturers and grain exporters in Houston’s eastern suburbs are now cut off from Gulf of Mexico shipping as the unfolding disaster enters its second week.

Texas politicians have defiantly sought to limit pollution lawsuits, and Texas has notoriously lax pollution enforcement. However, the lack of traffic through the shipping channel, which impacts productivity and therefore profits, is likely behind the Texas Attorney General’s filing a lawsuit against ITC this week, accusing the company of violating clean-air laws.

Decades of activism against pollution

For decades activists from the Texas Environmental Justice Advocacy Services (t.e.j.a.s.) have fought the polluting refineries on the east side of Houston. Those communities in Texas Congressional District 29 (CD 29) surround the Houston Ship Channel, home to the largest petrochemical refinery complex in the Western Hemisphere. The lack of safety in these industrial facilities has subjected residents to uncontainable toxic pollution.

According to t.e.j.a.s., “Houston ranks 1st in the U.S. for mercury, formaldehyde, benzene, 1-3 butadiene and a host of other toxic chemicals in the air. Texas ranks 1st in the country for carbon dioxide emissions, cancer-causing chemicals released into the air, toxic chemicals released into water, hazardous waste generated, and much more undocumented pollution. … Despite record profits, record pollution, record sickness, and minutes away from the largest medical center in the world, Texas CD 29 has more uninsured children than any district in the country.”