New York, March 24 — Today opponents of the 1999 U.S.-NATO war against Yugoslavia gathered in Ralph Bunche Park, across from United Nations headquarters, to commemorate the 20th anniversary of the air attack directed mainly against civilian targets in Serbia. The 78 days of bombs and rockets killed 3,000 people, destroyed hundreds of schools and collapsed bridges and hospitals. 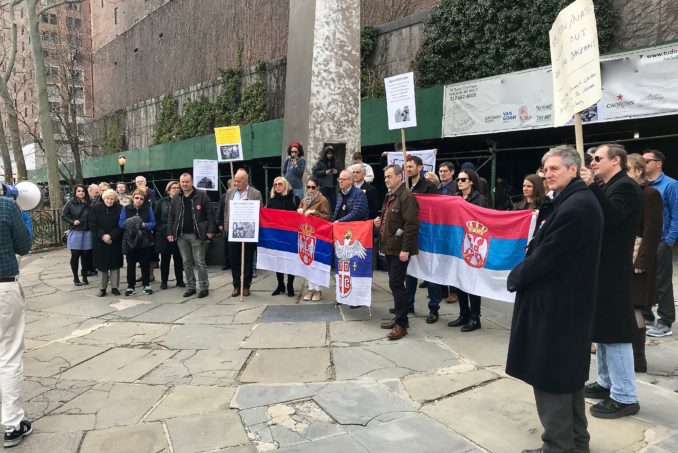 March 24 demonstration at the U.N. denounces 1999 war against Yugoslavia, says ‘Kosovo is Serbia.’

The war and subsequent imperialist intervention in the Balkans completed the disintegration of the former Yugoslavia, a multinational state of 20 million people. Yugoslavia had remained sovereign and socialist since its partisans drove out German imperialism in 1945. Now what remains are six small capitalist countries, semicolonies of Western imperialism. Already three of them are NATO members.

In addition, there’s the rump region called Kosovo, a province wrenched out of Serbia in violation of international law. There the U.S. military built Camp Bondsteel, its major base serving NATO in the Balkans.

Speakers at the rally had been active opposing the U.S.-NATO war in 1999. Besides reviewing the war crimes of the Western powers and their Balkan lackeys, some pointed to the insidious role of NATO.

Sara Flounders, co-director of the International Action Center who visited Yugoslavia during the bombing, underlined that it was at NATO’s 50th anniversary meeting in April 1999 — during the bombing — that the U.S. pushed through its strategy of expanding NATO membership and area of intervention. Poland, the Czech Republic and Hungary then joined and brought NATO membership to 19 countries.

There are now 29 members, with some on or near Russian borders, plus nine “global partners,” including Colombia. President Donald Trump has announced his intention to invite Brazil to join.

NATO began its expansion with its first open aggression aimed at Yugoslavia. Since then, NATO opened the war against Libya in North Africa and participated in the occupation of Afghanistan and Iraq, all under U.S. military direction. The military alliance, whose name — North Atlantic Treaty Organization — implies a limited area of responsibility, now intervenes worldwide.

In the period just following World War II, the United States was by far the dominant imperialist state, measured both by its economic and military power. Originally designed to confront the Soviet Union and to prevent workers’ revolutions in Western Europe, NATO’s structure puts Washington in control. The U.S. president always chooses the NATO commander, and the general in charge is always from the Pentagon.

While U.S. world economic dominance has constantly decreased, its power of destruction is still preeminent. NATO has been U.S. strategists’ choice instrument for keeping the other imperialist powers under U.S. control, something that went without question in 1949 at NATO’s founding.

For contributing money and their youth to imperialist military adventures, the ruling classes of the other imperialist powers get a small piece of the loot stolen from the rest of the world. What the “new” members get is a few crumbs. NATO has been turned into a worldwide police force serving imperialism in an attempt to reconquer colonies liberated during the existence of the Soviet Union.

Other speakers at the rally included former Serbian Information Minister Radmila Milentijevic, historian Barry Lituchy and composer Milos Raickovich, who organized the event. Raickovich called for a Yugoslav delegation at the major anti-NATO march in Washington, D.C., on March 30 to protest the April 1-4 NATO anniversary meeting there. (No2Nato2019.org)

Catalinotto and Flounders co-edited the book, “Hidden Agenda: The U.S.-NATO War Against Yugoslavia,” 2001.