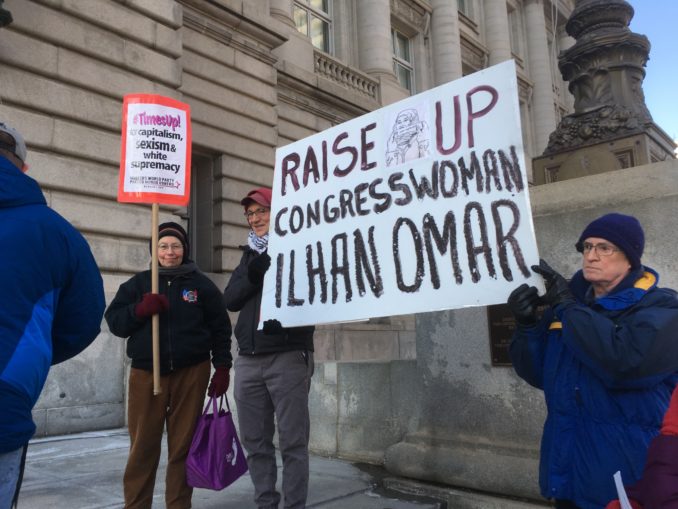 A crack has been made in the foundation of Washington’s alliance with Israel: The taboo of not criticizing the Zionist state in Congress has been broken. This was spearheaded by Congress members Ilhan Omar and her colleague Rashida Tlaib, who oppose U.S. support for Israel and champion Palestinian rights.

Omar’s courageous words have criticized the American Israel Public Affairs Committee, a pro-Israel lobbying group, and challenged Washington’s alliance with Israel. This has angered the capitalist establishment, but engendered much support from a growing movement inside the U.S. which agrees with her.

Omar, a Somali immigrant representing her Minnesota community, and Tlaib, a member of Michigan’s Palestinian community, are the first Muslim women elected to Congress. They back the Boycott, Divestment and Sanctions campaign opposing Israeli oppression of the Palestinian people.

The Islamophobic and racist attacks against Omar by right-wingers, including politicians, AIPAC and other Zionist forces, which include Christian evangelicals, has reached a fever pitch, with false cries that she is “anti-Semitic.” Liberals and centrists criticized her. Corporate media piled on the hostility. Omar faced — and still faces — death threats.

When bigot-in-chief Donald Trump attacked Omar on twitter, Tlaib rightfully tweeted back March 6: “How dare you even pretend you have not given white supremacists and neo-Nazis even more power in this country? We will always stand with our Jewish, Muslim and neighbors of all faiths against your type of hate.”

Congressional right-wingers assail Omar for criticizing AIPAC and U.S. support for Israel, hypocritically accusing her of anti-Semitism — which they have suddenly discovered. They demand her ouster from Congress but gave a pass to Trump when he remarked that neo-Nazis marching in Charlottesville, Va., in 2017 were “very fine people.” These right-wingers said nothing when Trump spouted anti-Jewish and racist rhetoric during his election campaign and retweeted fake news stories about “global Jewish financial interests.”

Democratic Party leaders have criticized Omar and tried to introduce a House resolution condemning anti-Semitism, meant to suppress her and Tlaib’s denunciations of Israel and AIPAC. That these leaders singled out a woman of color, but had not formally condemned Trump’s bigotry or Rep. Steve King’s spewing of white nationalism, angered many people of color in Congress.

Many Congressional Black Caucus, Congressional Progressive Caucus and younger members supported Omar. With pressure from thousands of activists, the resolution evolved into one that condemned all forms of bigotry. This passed the House of Representatives with 23 Republicans refusing to vote for it.

Both Omar and Tlaib regarded this as a victory since it was the first time either chamber of Congress has condemned anti-Muslim bigotry.

The people of the world have viewed with horror Israeli military attacks on Palestinians in the Occupied West Bank and Gaza. A Feb. 28 report from the United Nations Human Rights Council stated the terrible toll taken by Israeli snipers at the Gaza border during mass protests in 2018. They shot over 6,000 unarmed demonstrators, killing 189, including 35 children, three health workers and two journalists. In total, 23,313 Palestinians were injured. “Snipers targeted people clearly identified as children, health workers and journalists.” (fair.org., March 8)

Israel’s crimes against humanity have outraged millions and brought outcries against the Zionist state’s racism, brutality and inhumanity. Criticisms of Washington’s financial and political support for Tel Aviv have mounted. Solidarity and sympathy for the Palestinian people are growing, demonstrated by increasing worldwide support for the BDS movement.

Despite U.S. government and AIPAC attempts to squelch both the BDS campaign and support for the Palestinians, this movement is mushrooming, as shown in protests by youth, Arab, Muslim, African-American, Jewish and other progressives. Michelle Alexander’s groundbreaking op-ed in the Jan. 19 New York Times, “Time to break the silence on Palestine,” was a clarion call to oppose Washington’s backing of Israel and its crimes against the Palestinians. The very publication of the op-ed reflects the struggle’s growing strength.

After Omar criticized AIPAC, and Trump and his racist cronies viciously attacked her, Jewish Voice for Peace issued a press release Feb. 12. It read: “Jewish Voice for Peace is proud to defend Ilhan Omar. We reject attempts to silence her criticism of Israeli policy and her support for Palestinian rights and freedom, just as we reject anti-Semitism and bigotry in all forms.”

A statement by #westandwithihan issued March 1 quickly garnered hundreds of Jewish endorsers. It disavowed AIPAC, and said: “We thank Ilhan Omar for having the bravery to shake up the congressional taboo against criticizing Israel.”

Ady Barkan, a young disabled Jewish activist, with ALS, defended Omar and Tlaib, writing: “[They] are allies of mine and of Jews … who are fighting for peace, racial justice, immigrant rights and the defeat of fascism. The anti-Semites are the Nazis and white supremacists who marched and murdered in Charlottesville … and the MAGA supporter who massacred worshipers at a Pittsburgh synagogue.” (The Nation, Feb. 12)

The shake-up in Congress and within the ranks of the Democratic Party over Washington’s pro-Israeli policies is far from over. With more people, including youth, sympathetic to the Palestinian people, and global outrage growing at Israel’s reign of terror, one thing is certain: This struggle will continue.