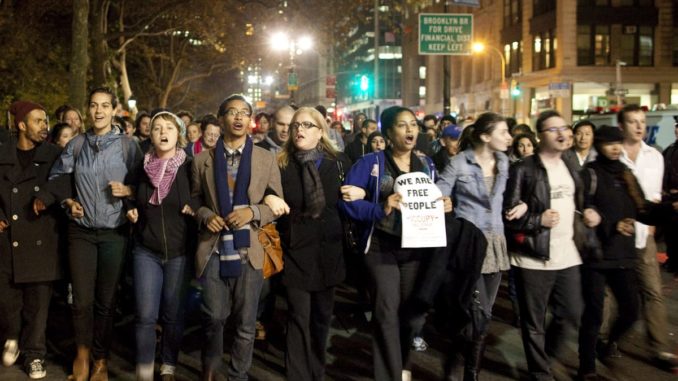 The crowd roared when the head of the imperialist/capitalist state proclaimed that “America will never be a socialist country.” Donald Trump made himself the standard-bearer of U.S. capitalism during his State of the Union address in February, and both parties lined up to follow.

But in spite of the thunderous response, the bipartisan cries of support for capitalism carried a hint of desperation. Why did Trump feel the need to rally Congress against the advance of socialism?

The reason is that young people are increasingly rejecting capitalism, and it frightens the ruling class. Young people have seen the harm caused by neoliberal capitalist regimes, and they are embracing socialism as the only viable alternative.

The lifetime of today’s youth has been marked by the dramatic stripping away of capitalism’s promises and the revelation of its cruel reality. Unlike their parents’ generation, today’s young people were told that they could not get a good job without a college degree. Under these terms, those who could saddled themselves with five- or six-figure student loan debts, only to be mauled by the post-2008 job market.

Entry-level jobs require not just a degree, but relevant experience. Gaining experience means shouldering the burden of an unpaid internship — giving away your labor power to a company for free while you find some other means to support yourself. With the pre-existing disadvantage of debilitating debt payments, the Millennial generation came of age in a world where even getting a job is unaffordable.

Those who do find work are not greeted with formerly stable employment and retirement plans of previous generations. Instead, their employment, and thus their survival, is tenuous at best. They are encouraged to get second jobs in the “gig economy.”

Piling one scam on top of another, the capitalists demand the working class submit not just to the bosses, but also to algorithms which exploit workers with computerized precision. With no job security, no retirement plans, no escape from debt and seemingly no future, the current generation understands that the only means of survival is dismantling the old system and replacing it with something new. For today’s young people, socialism isn’t a fashionable new trend — it is a life raft in a sea of capitalist destitution.

A system that puts workers in control is the only rational option — the alternative is a life of economic instability. The capitalists have been given every chance to “reform” their system, and they have come up with nothing. “Hope and change” was nothing but hot air, and the current generation understands this. They know that capitalism can never, and will never, be fixed.

Capitalism is unsustainable. A dramatic transformation from a system based on theft to one based on meeting the needs of society is required. Capitalism brings with it imperialism, racism, patriarchy and environmental destruction. Today’s youth want no part of that future. They have seen the damage done at home and abroad. They demand a morally justifiable economic policy.

Young people desire a system where medical care is not determined by one’s ability to pay and where housing is a human right. They have growing solidarity which demands an end to wealth extracted from the many by the few — that can only be accomplished through socialism.

Young people are correct in identifying this solution. When we look at the pain caused by greed and economic exploitation, and the righteous anger of people rising up to resist it all over the world, it’s clear that the victory of socialism over capitalism is inevitable. Systems of oppression cannot thrive forever.

We live in an increasingly interconnected world where class consciousness is on the rise. Unity among the masses is always a sign that the ruling class will soon lose its grip on power. The moral force of socialism cannot be stopped, and neither can the masses who have pushed it to the forefront of U.S. politics. Workers’ strikes will only intensify. As these workers’ movements continue to become more intersectional and join with anti-racist, anti-patriarchal and anti-imperialist movements, they will become uncontainable. Any attempt by the ruling class to suppress these movements will only hasten its own demise.

Today’s youth have emerged from the ruins of the greatest economic disaster since the Great Depression. Their experience has taught them that capitalism is not an engine of economic growth, but of cannibalization and environmental catastrophe. Instead, they crave a system based on equity and economic justice. The ruling class is terrified that soon they will get it.