Black History Month began as a weeklong celebration, proposed by Carter G. Woodson (1875-1950) in 1926 to honor, in his words, the contributions, achievements and vibrant history of Negroes in the U.S. and the world. He believed Black people needed to demonstrate that they had a past, present and future.

Woodson, an author, historian and early scholar studying African-American history, wrote “The Mis-Education of the Negro.” He was also known as “the father of Black history.” Woodson chose the month of February because of the birth dates of Frederick Douglass and Abraham Lincoln. 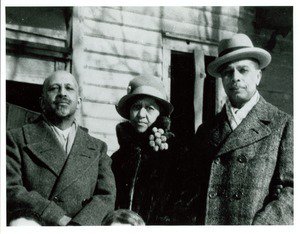 W.E.B. Du Bois (left), Nina Du Bois and James Weldon Johnson were key organizers of the 1917 march in Harlem, N.Y., against ongoing violence aimed at Black people, including the East St. Louis Race Riots, where white mobs claimed the lives of up to 250 African Americans and left nearly 6,000 fleeing from burning homes.

The observance of Black history evolved from a week into Black History Month. This came about as a result of African Americans continuing to organize and struggle for racial justice and equality. Black people had been celebrating Black historical accomplishments and wanted official recognition.

Under sustained pressure, fifty years later in 1976, at the height of the Black Power Movement, President Gerald Ford made Black History Month official, coincidentally or not, during the 200th anniversary of the American Revolutionary War.

Government recognition of Black History Month also served the interests of the capitalist ruling class. Capitalism co-opts observances to its own end, whenever suitable. Many Black people were thus uplifted to a national height, but only because their legacies could serve the continuation of elitist politics.

The official telling of Black history tends to be watered down and controlled. On the surface, Black History Month is a sound way to remember and celebrate the forebears of the struggle for mass liberation. But the ruling class, along with its political allies, promotes a contrived account of Black resistance that obscures the more militant histories and achievements of Black Americans. The Civil Rights Movement’s history is thereby diminished and legacies of racial injustices omitted.

Celebrations in the U.S. don’t tend to affirm people whose histories are challenging. For the most part, celebratory aspects of Black History Month are reserved for figures whose history doesn’t upset the status quo. Selective retelling of Black history plays into the hands of the oppressor’s socioeconomic and political systems upon which it is based. This ignores and leaves out the radical foundations of those it claims to represent.

Radical and revolutionary Black figures and agents of change are generally overlooked or diminished. Civil Rights leader W.E.B. DuBois (1868-1963) focused on racial uplifting, economic strength and self-sufficiency for African Americans during the early 1900s. A sociologist, historian and author, DuBois was also a Pan-Africanist and co-founder of the NAACP. He wrote the groundbreaking “Black Reconstruction in America 1860-1880” and “The Souls of Black Folks.”  But what’s ignored are his socialist politics and Communist Party USA membership, as well as his renouncing U.S. citizenship and self-exile to Ghana.

The Rev. Dr. Martin Luther King Jr.’s “I Have a Dream” speech is spotlighted, but not his more radical “Beyond Vietnam” speech. Rosa Parks did not just refuse to give up her seat on a bus in Montgomery, Ala. — the full scope of her political life included fighting for global justice, especially during the U.S. war on Vietnam, along with fighting for racial, criminal and economic justice in the U.S. 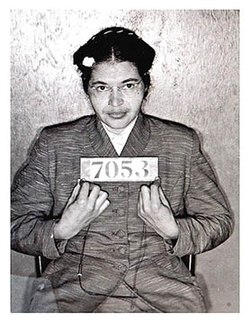 Rosa Parks being booked into the Montgomery, Ala., jail for defiantly breaking segregation laws on a city bus Dec. 1, 1955.

The more militant histories of Black resistance and the achievements of African Americans like Malcolm X, Mabel and Robert Williams, the Black Panthers and the Deacons of Defense are also obscured by the ruling class and their political allies. These stories have been deliberately erased or co-opted when teaching U.S. history.

The merits of Black History Month continue to be debated in the U.S. One contention places the observance as being the opposite of so-called “American values” for focusing on a specific racial group. It insists the U.S. is a “color-blind” society. Profane attacks on Black history deny past and present achievements, against all odds, of African-descendant trailblazers in the U.S. and elsewhere.

Another telling of Black history defends and speaks to the necessity of the observance due to the historical and current oppression of African Americans. Unique to the African-American experience are the nearly two-and-a-half centuries of being enslaved, followed by the legal practice of segregation and racial discrimination against Black people from 1880 to 1965, forbidding them to be in “white-only” spaces, in the South and the North, which also provided justification for killing Black people.

There’s a saying that since Black History Month is commemorated in February, it can be deduced that white history “month” expands to the rest of the year.

Movements aimed at transforming the social order have to continue to do so. It’s only when the basis of society is drastically altered that these differing histories can supersede current principles and policies. Until that time, Black History Month must exist and be defended –- not only from flagrant racist and right-wing attacks -– but also from liberals who view tokenism and Black tolerance as the only appropriate ways of representing and remembering the Black past.

Truthful U.S. history reveals the great impact that Black Americans have had since colonial times. But this legacy must not and cannot be understood in ways that strengthen a dominant white view of the world, shown and seen mainly through that lens.

The elite appropriate and rewrite history in order to quiet dissent. The more unsavory forces of racist and reactionary politics distort and attempt to do away with the history altogether. Black history will be synonymous with U.S. history only when there’s a solution to the “race” question. But this is way off into the future —  and not possible yet due to existing socioeconomic, political and cultural realities.

Black History Month must be supported and widened, and not just in February. There’s need for continued advocacy directed at understanding Black history on more radical grounds, along with wider social movements aimed at overthrowing the status quo. Black History Month won’t be necessary when the long-existing racist environment is eliminated.

Revisionist history erases and whitewashes Black history, but nevertheless that history has been and will ultimately be passed down through generations. Black people must continue to affirm their humanity, while refuting racist stories. Telling full, real and authentic stories helps fill the void left by incomplete textbooks.

The U.S. needs to come to terms with its true past. The country has not fulfilled the promises that it says it is most proud of. Black history must be fought for — and against those who seek to eliminate it through opportunistic appropriation.