Education workers in West Virginia are again in motion for their students and their jobs. In 2018 in all 55 counties in the state they held a historic nine-day walkout, defying state prohibitions on public sector worker organizing. 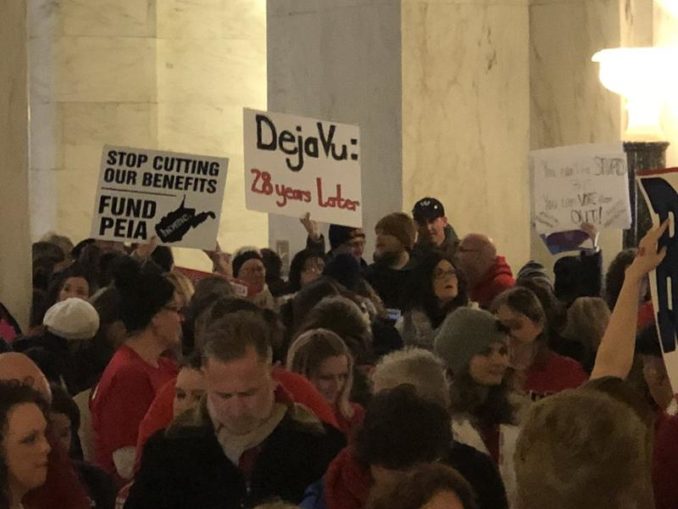 At a Feb. 3 rally by education workers at the West Virginia Capitol building, a sign refers to a 1990 strike by West Virginia teachers with demands similar to those in 2018 and today, including health insurance, wages, and student and classroom needs.

When the legislative session began in January, ultra-right state Senate Republicans introduced an “omnibus bill” on education, SB 451, in reprisal for last year’s work stoppage. The bill tied a 5 percent pay raise and $150 million funding for health insurance to union-busting legislation that the 2018 strike had defeated.

Education workers across the state carried out a statewide walk-in and various informational pickets on Jan. 9. These actions forced the House to concede the point on payroll dues deduction, agree to a “compromise” by changing the language on seniority, and limit the number of charter schools to two “pilot” programs in Charleston and Huntington, the state’s biggest cities. Currently, no charter schools operate there.

On Jan. 11, the speaker of the House, Roger Hanshaw, called for a public hearing on the omnibus bill at 8:00 a.m. Many suspect that Hanshaw, a corporate attorney for the fracking and coal industries, chose the time to keep school workers out. Then evangelical proponents of homeschooling and paid lobbyists for the union-busting American Legislative Exchange Council could dominate the narrative.

African-American delegate Sean Hornbuckle’s motion for an additional hearing at 5:30 p.m. carried, so teachers and support staff could present their oral arguments against the bill. School workers attended and spoke out at both hearings.

The bill now returns to the Senate, where the reactionary clauses could be introduced again.

In response to these legislative maneuvers, teachers and school service workers here voted to go on a statewide strike if necessary.

State union officials had asked members of the West Virginia Education Association, American Federation of Teachers-West Virginia and West Virginia School Service Personnel Association for an “authorization vote” for an unspecified work action, as they did before last year’s walkout.

More than 150 local leaders of all three unions met Feb. 9 to tally the results, which were nearly 90 percent “yes.”

Work actions closed schools in all 55 counties in 2018 because superintendents willingly cooperated in cancelling schools. Picketers did not lose pay or benefits. Most school administration and elected board members claimed they supported their faculty and staff.

This year, while most county boards of education have declared solidarity by signing resolutions, some are threatening an injunction if the unions call for action. Some board members have publicly supported the reactionary bill, contradicting their position as public education “representatives.”

While almost all county superintendents oppose the bill, especially the section on charter schools, a few are exposing their role as bosses by openly denouncing any potential walkout.

The capitalist media have also tried to divide the public from school employees by painting the latter as “greedy” and by lying about how privatization destroys public schools.

Education workers and supporters are hoping the bill will eventually die. At the same time, union militants know most legislators serve the racist, sexist, anti-LGBTQ, exploiting ruling class. Some individuals most enthusiastic about the bill wear fascistic MAGA hats and use derogatory language about oppressed communities on the chamber floor.

Only one thing is certain: The teachers and service workers are willing to walk again if legislators fail to kill their reactionary bill.