The Mexico/U.S. border in south Texas is the most militarized region in the United States. Nonetheless, the people of the region are fighting back against the hated “Wall” proposed by the even more hated Donald Trump.

There are layers and layers of repressive apparatus in this region. Called the “Valley” by Texans — referring to the Rio Grande Valley — cops, sheriffs, Customs and Border Patrol, National Guard as well as military troops are part of the armed Valley occupation. 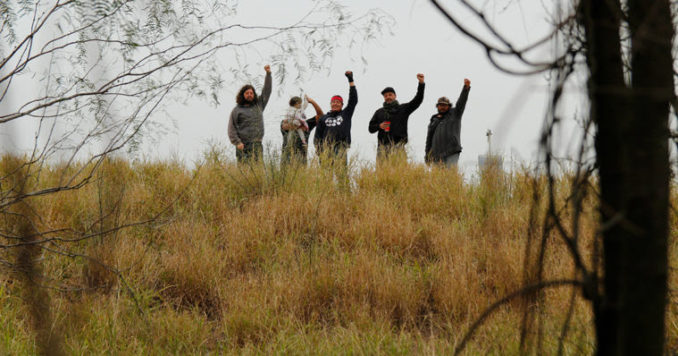 Activists resist the Wall at the Jackson Cemetery in the Valley

The American Civil Liberties Union stated in testimony before the Inter-American Commission on Dec. 6: “[T]he U.S. government (has) increased attacks on immigrants and communities of color through the militarization of domestic law enforcement agencies and the use of the military. Nowhere is the United States militarization more pronounced than on its southern border with Mexico and throughout border communities.” (tinyurl.com/y4b5k900)

The National Network for Immigrant and Refugee Rights writes on its website: “[B]order militarization … [is] transforming the area from a transnational frontier to a zone of permanent vigilance, enforcement, and violence. The border has become an imagined war zone … where the U.S. constitution has little to no value.” (tinyurl.com/y6nb24or)

The ACLU agrees: “Customs and Border Patrol officials regularly act like the Constitution does not apply, operating lawlessly and frequently disregarding the Fourth Amendment’s protection against unreasonable searches and seizures in its ‘100-mile border zone’ ” (tinyurl.com/gqs54lj)

NNIR summarizes: “[F]unding for border enforcement surpasses the funding of all other law-enforcement agencies (FBI, DEA, ATF, Secret Service and U.S. Marshals Service). The American Immigration Council estimates that $263 billion have been spent on immigration enforcement since 1986.”

Yet Trump today is demanding $5.7 billion more for “The Wall.” He even held government workers hostage for that money when he shut down the government and furloughed them without pay or made them work for no pay a few weeks ago.

Where there is occupation, there is resistance

All this money and military occupation have not stopped the people of the Valley from organizing. Despite living in a region where the state and its enforcers declare there are no constitutional rights, the Valley is resisting.

Heroic Indigenous activists of the Standing Rock protests, as well as members of the Carrizo/Comecrudo Tribe of Texas, have set up camp at the Eli Jackson Cemetery to protest “The Wall.” According to the Feb. 8 Texas Observer, the activists have “vowed to stand their ground in the face of the president’s bulldozers.”

The Eli Jackson Cemetery was founded in 1865 on a ranch established in 1857 by Nathaniel Jackson after he came from Alabama with his family and eleven freedmen. Jackson was white and a former slave owner. But he appeared to have a change of heart when he married a Black woman. (tinyurl.com/yy5wm8o5)

Upon arrival in south Texas his family garnered a reputation of helping the community and had one of the few cemeteries that buried Black, Brown and white people. The remains of 150 people lie in the cemetery, of many nationalities but primarily Native and Black people. There are also several unmarked graves, likely to be of poor people and people of color.

A few feet north of the cemetery, the Trump administration plans to turn a river levee into a 30-foot concrete and steel wall, including a clearing for a 150-foot enforcement zone. The community fears that bodies from the cemetery will be exhumed and most of the cemetery razed, so they have set up tents to protect the area. Environmentalists have also joined Indigenous people at the cemetery as “The Wall” will have dire environmental consequences for the area.

Juan Mancias, one of the encampment leaders, stated in the Texas Observer interview that the encampment is called Yalui Village. Mancias is the chair of the Carrizo/Comecrudo Tribe, and “yalui” means butterfly in their language. The butterfly, especially the monarch that migrates into and out of Mexico, has become symbolic of the right to migrate and of the need to protect the world’s environments.

The Wall will uproot graves, homes, everything

Nayda Alvarez lives about 360 feet from the Rio Grande in an unincorporated community called La Rosita.  She is a teacher and has lived in her home since the second grade. Her house is on property that’s been in her family for at least five generations, which she inherited from her grandfather. (Texas Observer, Feb. 5) 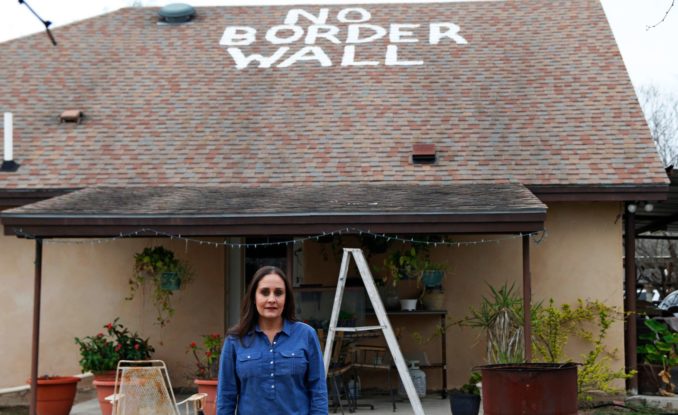 According to local news reports, dozens of landowners in the Rio Grande Valley have received letters from the Army Corps of Engineers asserting that the government wants to access homeowners’ properties to survey, test soil and other ominous actions. The Texas Civil Rights Project is reaching out to the community to inform them that they are not at all required to let the government have access to their lands.

These can be the first steps in the federal government getting ready to grab private property with the dreaded eminent domain, which gives the state the right to seize property for public use. There are unresolved court battles along the Mexico/U.S. border against eminent domain that go back to the George W. Bush administration.

University of Pittsburgh professor Gerald S. Dickinson, who studies land use and constitutional law, warns that seizing land Trump wants to build “The Wall” on would be very different than the land seizures that happened under Bush. The Trump wall could mean a massive land seizure of private property exactly like the land Alvarez has had in her family for five generations. (The Atlantic, Jan. 8)

Alvarez has never been an activist, but she has now joined the No Wall Coalition. She bravely refused to sign over access to her property and boldly painted “NO BORDER WALL” on her roof for drones and border helicopters to see. Alvarez is getting ready for a legal battle amidst the trials and tribulation of daily life. The Texas Observer points out that even if homes are saved, the “wall could still make the property unlivable.”

The Army Corps has sent multiple letters to the Alvarez family. They warned that the government would take the family to court within 90 days because the family has refused them permission.

“I think they assume we’re ignorant. They’re threatening. They say, ‘You sign, or we’ll take it away,’” Alvarez said. “This is my house.”

Mancias told the Texas Observer: “We’re ready to protect the environment and our rights as the original people of this land. What are they gonna do? Run us over?”

For Alvarez and Mancias to stand up in the midst of the militarized border is an inspiration to all. It shows that the struggle for migrant, environmental and worker rights marches on.

As someone from the enemy camp once said — a former director of Homeland Security — “Show me a fifty-foot wall, and I’ll show you a fifty-one-foot ladder.” (tinyurl.com/yy8yeycs)

Indeed, nothing can stop the resistance.