Detroit’s well-heeled had to pass through a gauntlet of hundreds of protesters this year to get to the annual black-tie event known as the North American International Auto Show.

Before it opens to the public, the show hosts a “charity preview.” Billed as “the hottest night this winter,” it allows attendees to get a sneak peek at the latest new vehicles — if they can afford the $400 ticket.

The demonstration on Jan. 18, called by the Detroit Coalition for a Green New Deal, came together in response to General Motors’ announcement of plant closings in the U.S. and Canada.

In addition to demanding that the plants in the states of Michigan, Ohio and Maryland as well as in Ontario, Canada, not be shuttered, the coalition is demanding “green jobs.” Protest organizers advocate the use of “eminent domain” to seize the Detroit Hamtramck Assembly Plant (DHAM), not only to save jobs but to combat climate change by building green products such as solar panels, wind turbines, and buses and trains for mass transit. 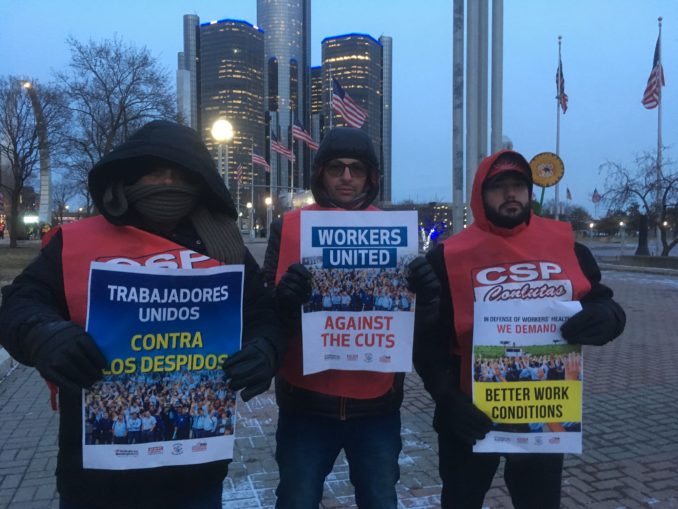 The coalition, initiated by Democratic Socialists of America, also included Autoworker Caravan, a rank-and-file autoworker organization that has demonstrated outside the auto show on many occasions. Over two dozen organizations endorsed the action. Congresswoman Rashida Tlaib spoke at the rally.

Both the United Auto Workers union and Canada’s UNIFOR were invited to participate in the protest, but declined. The UAW held a candlelight vigil a block away from the show prior to the coalition rally. Many auto workers and community supporters attended the vigil and then marched as a group to the auto show. Chanting “GM got bailed out, we got sold out,” they massed right outside the doors to the show at one point.

A global contingent of GM workers from Brazil and Canada joined Ford and Fiat Chrysler workers from Metro Detroit and elsewhere. The retirees’ chapter of UNIFOR Local 222, which represents a GM plant in Oshawa, Ont., that faces closing, sent a bus to the rally. Many angry workers rode the bus with the retirees.

Members of CSP Conlutas, one of the GM workers’ unions in Brazil, also came to Detroit to attend the protest and various meetings. This union has militantly and successfully fought mass layoffs.

The same day as the protest, Oshawa GM workers drove around their plant and stopped trucks from getting in and out for two hours. A day earlier UNIFOR members at Inteva, a lower-wage parts firm that supplies the Oshawa plant and DHAM, held a one-day walkout to protest the closings.

Workers are not going to let GM destroy their livelihoods without a fight.