The People’s Republic of China successfully landed the first spacecraft, called the Chang’e-4, on the far side of the moon on Jan. 2. The probe was sent to search for rare earth metals and helium-3, used to make safer, more productive energy.  Scientists hope to find answers about the evolution of our solar system and the origins of the universe. This is a stunning achievement. 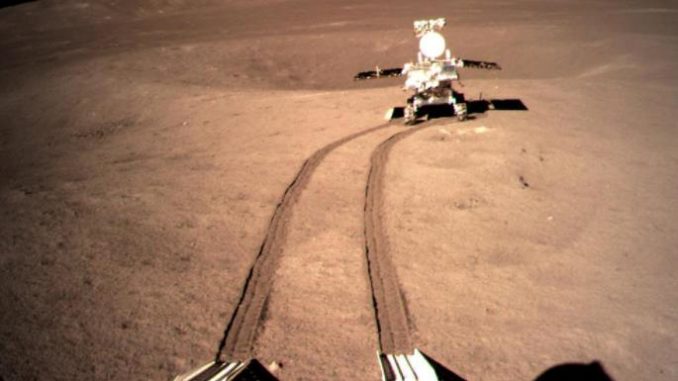 The landing of Chang’e-4 is just part of China’s overall space program that is centered on improving conditions for the country’s centrally planned society. China is developing a lunar space station and plans on sending a crew to the moon as soon as 2022.

In contrast to China, the U.S. space program is driven by capitalist competition and the development of military weapons. Trump called on the Department of Defense and the Pentagon to develop a “Space Force,” a sixth branch of the military for the purpose of protecting U.S. assets in space and attacking its enemies during wars.

The National Aeronautics and Space Administration’s International Space Station will soon be decommissioned. There are no plans for a replacement. NASA’s budget has been stalled.

China now produces 90 percent of the world’s rare earth metals. The Chang’e-4 landing is searching for new sources of valuable materials like copper, aluminum, iron and rare earth metals essential for emerging technologies like cell phones, computers and other electronics and medical equipment.

Nuclear fusion, the next generation of nuclear power, will someday replace nuclear fission, which is now used to fuel nuclear power plants. Fusion can generate four times as much energy as fission without hazardous environmental problems like radioactive waste.

Helium-3, an ideal fuel for nuclear fusion, is an isotope of the element helium. There are an estimated 1 to 5 million tons of it on the moon, compared to only 15 tons on Earth. Once nuclear fusion technology matures, it will take 100 tons of helium-3 each year to meet global energy demands.

Ouyang Ziyang, a prominent Chinese space scientist, predicted 13 years ago: “Each year three space shuttle missions could bring enough fuel for all human beings across the world.” (China Daily, July 26, 2006) For now it is too expensive to haul helium-3 back to Earth, but it may be useful as fuel for future spacecraft to explore deeper into space.

Because the moon rotates just once each time it circles the Earth, only one side of its surface is visible from Earth. The far side of the moon is shielded from noise caused by radio waves, cell phones, power lines, GPS satellites and Wi-Fi.

Scientists stationed on the moon’s far side will be able to look more deeply into space.  In so doing, more will be learned about the evolution of the universe, the birth of the first stars and the formation of our solar system.

Photographs from a Soviet spacecraft in 1959 showed that the far side of the moon has a thicker, older crust with deeper and more numerous craters. Scientists don’t know with certainty why the crust is thicker there. Change’e-4 is designed to help answer that question.

Craters created by ancient asteroid hits on the thicker crust have not been filled in with lava flows since they were formed. Because of this, they may hold information about the early history of the moon’s formation and the development of our solar system.

Chang’e-4 landed inside the oldest, deepest crater, called the Von Kármán Crater, on the far side of the moon. This basin offers scientists more information on the moon’s composition, structure and evolution and may be rich in rare earth metals and iron.

Since the moon blocks transmissions from the Chang’e-4 probe, China launched a relay satellite called “Queqiao,” or “Magpie Bridge,” which bounces information and images from the probe back to China’s receiving stations.

The Chang’e-4 lander carried the first mini-greenhouse to the moon. A mini biosphere is being set up with six live species: cotton, rapeseed, potato, fruit fly, yeast and arabidopsis, a flowering plant in the mustard family. This is a crucial step in establishing a longer visit by astronauts and developing a lunar space station.

Cooperation and education, not competition

Deng Xiaoping, China’s leader from 1978 until his retirement in 1989, told the world in 1978 that China was not taking part in the space race. He explained that the goal of China’s space program was to improve the standard of living for the Chinese people. It would focus on communications, remote sensing and meteorology.

Scientists from Sweden and Germany collaborated with China on designs for some of the eight scientific instruments used in the Chang’e-4 mission. The Swedish Institute of Space Physics developed an instrument that will investigate how solar wind interacts with the lunar surface.

Instead of working with China, President Donald Trump argued that the Chinese and Russian space programs are a threat to his Space Force. This is U.S. imperialist saber rattling.

China provides four times as many college degrees in science, technology, engineering and mathematics (STEM) than the United States. Federal funding for education has decreased in the U.S., where a college degree is very expensive — and does not ensure better jobs for graduates. The U.S. is falling behind in space exploration and in other areas of scientific development.

Speaking about students in China, U.S. astronomer and professor Chris Impey said, “They have very young engineers in their space program — very keen, very well trained, very ambitious.” He said China’s space program, like its economy, is growing explosively, at roughly 10 percent a year for the past decade. (NPR, May 11, 2015)

In other areas of science and technology, like artificial intelligence and quantum computing, China is developing more quickly than the U.S. China recently launched a quantum satellite into space that physicists say can lead to a super-secure, super-fast quantum-internet system for China.

The first Chinese satellite launch, which happened in 1970, focused on commercial applications. Since 2003, China has launched two space labs and sent six crews, including 12 taikonauts (Chinese astronauts), into low orbit.

In 2016, China completed the world’s largest telescope built to detect radio signals, potential signs of life, from distant planets. That year, the country launched the Tiangong 2 space lab, which has been orbiting Earth since then.

Last year China sent 38 launches into space, more than any other country. Many of them carried GPS-type systems that already cover China and much of Asia. China is currently working on developing a space lab to be stationed on the moon, after which the country will be able to send crews of scientists to continue exploration there.

The Chang’e-4 is the first moon landing by any country since 2013.

China annually spends about $2 billion on its space budget, compared to NASA’s $18 billion budget — and its space program is growing 10 times faster! How can China, a still-developing country, make these profound advances with less money?

Deirdre Griswold, editor of Workers World newspaper, answered this question in a WW Commentary on Dec. 20 — “because the basic infrastructure is publicly owned, not in the hands of a profit-seeking, parasitic ruling class.”