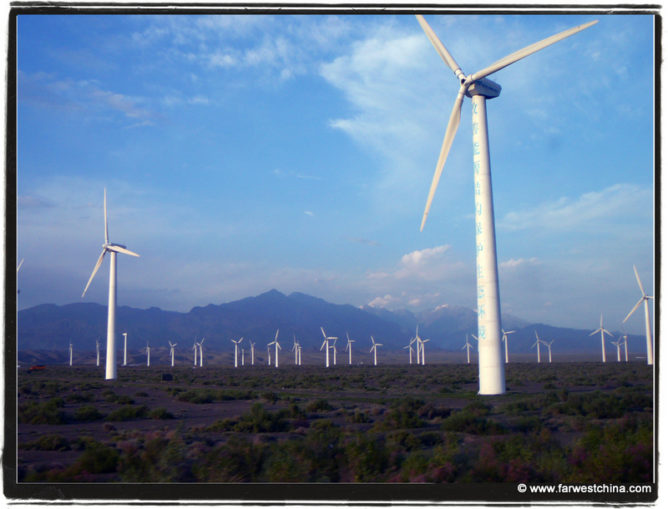 Dabancheng Power Station, the first large-scale wind power plant in China, is also the largest in Asia, with an annual generated power of 18 million watts.

This is a critical time for the world. What happens over the next few decades can determine the health of our planet for centuries to come.

Every aware person should certainly know by now that the U.S. government is the biggest obstacle to any meaningful global effort to cut carbon emissions.

But it isn’t just Trump, troglodyte that he is. Scientists have been ignored by every administration in Washington since they first began alerting politicians about climate dangers at least 40 years ago.

So what can be done about it? This is where the environmental movement needs to differentiate itself from Al Gore and others who have campaigned for a carbon tax as the answer to reducing emissions. That is a totally false position and covers up class truths about the economy.

This problem has just been brought into sharp focus by the Yellow Vest rebellion in France, where millions of workers and petit bourgeois have been in the streets fighting the French government over an increased tax on petrol — gas and diesel.

The rich, reactionary French president, Emmanuel Macron, has had to pull back from implementing the tax right now. From being fairly popular just a year ago, he is now a hated embodiment of rule by the super-rich.

Macron is no great environmentalist, but he thought he could put a new tax over by cloaking it in terms of reducing greenhouse gas emissions.

However, French workers had already been pushed to the wall by the cuts in real wages and benefits that is occurring in every capitalist country.

For people in France who need to drive cars or vans to work and earn a living, the tax, camouflaged as “green,” was the last straw.

This is not just a French problem. Workers in the U.S. are facing the same freight train of capitalist austerity, precarious jobs and declining purchasing power.

We all know how Trump tricked a lot of workers into voting for him by attacking regulations that he claimed destroyed their jobs. He made a big point of appealing to coal miners and factory workers — particularly white workers who at one time were making a living wage but now fear being pushed out of the job market.

Trump’s promises of jobs may be wearing thin, but just seeing him discredited or losing the next election is no answer to this huge problem.

What needs to be done is to put forward a program that can win workers to the environmental struggle based on their immediate needs. A carbon tax won’t do it.

First of all, no workers should lose their income when a polluting plant or mine is shut down. That’s number one.

Workers need a guarantee that they’ll get retraining and an income for as long as it takes to find another job. How can workers put long-term environmental issues first when they’re agonizing over how to pay next week’s rent, buy food and cover medical bills — and afford gas in their cars so they can get to work in the first place?

This demand should be at the top of the environmental movement’s agenda.

Workers need to know there IS another way

Polls show that “socialism” is no longer a creepy scare word to most people in the U.S., particularly young people. But the movement needs to educate people in this country about what’s actually happening in socialist countries. There are a lot of lies to overcome, but facts are stubborn things and can be brought before the people.

All you hear from the capitalist media is that China has become the world’s biggest producer of carbon emissions. Okay, that’s true. But here is what you don’t hear and need to know: Per person, China’s emissions are just one-third of those by people in the U.S.

Meanwhile, China, in just a couple of generations, has become the world’s largest producer of manufactured goods. It has been able to do this while building up a tremendous infrastructure, and that of course takes energy.

Yet China has been able to keep per-person emissions much lower than the U.S., even while raising the standard of living. Hundreds of millions of Chinese people have been raised out of deep poverty.

How can a still-developing country do this? China can make these advances because the basic infrastructure is publicly owned, not in the hands of a profit-seeking, parasitic ruling class.

And China’s development is planned — with fighting climate change built into that plan. Even though the Chinese Communist Party decided in the 1980s to allow some private ownership in order to acquire the capital and technology needed for its industrial development, the 90-million-member party, which led a thoroughgoing socialist revolution that triumphed in 1949, is in command and sets the rules.

Cuba is another socialist country that shows how a publicly owned and centrally planned economy, even one blockaded by the U.S., can move forward in protecting the environment.

Only 4 percent of Cuba’s electric power comes from renewables, but it is implementing plans to raise that to 24 percent by 2030. China has helped Cuba acquire the technology to make solar panels. Many different agencies of the Cuban government are coordinating efforts to derive energy from biomass, wind and solar.

In moving away from fossil fuels, these socialist countries did not tax the workers or cast them out of their jobs. In China’s case, it has built up hydroelectric dams, wind farms, solar fields and mass transit, modernized the power grid, and at the same time set aside hundreds of billions of dollars to maintain and retrain coal miners and other workers whose polluting industries were being phased out.

It can be done. Let’s fight for it. We can’t let capitalism wreck our planet.