From Dec. 10 to 15, the 4,000 members of the National Union of Healthcare Workers showed strength in the streets when striking their employer, Kaiser Permanente. These mental health professional workers are psychologists, therapists, social workers, psychiatric nurses and addiction specialists who treat patients with depression, bipolar disorder and other conditions. On Dec. 12, the strike not only expanded to 15 hospitals and 85 clinics, but members of the California Nurses Association and Stationary Engineers Local 39 joined picket lines!

Kaiser, the country’s largest nonprofit healthcare maintenance organization, currently provides coverage for about 8.8 million Californians. The company makes record profits — $2.6 billion since the beginning of 2018 — and their executives get huge payouts.

Kaiser has refused to ensure that its hospitals and clinics are fully staffed. Patients often wait more than a month to be seen because there’s only one full-time mental health clinician for every 3,000 Kaiser patients. Management has refused to hire enough mental health therapists since 2015. (NUHW, Nov. 29)

That’s why “there’s a critical condition every day of the year,” said NUHW President Sal Rosselli. (Daily Democrat, Dec. 11) As demonstrators rallied with chants and signs — “Care delayed is care denied!” — members of other unions and community groups showed solidarity as workers fought the good fight to end the access crisis! 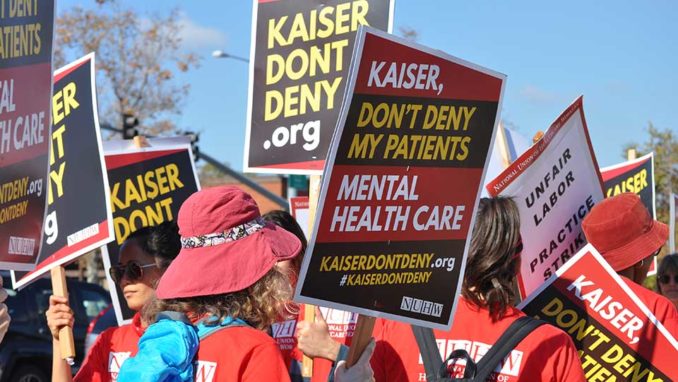 Nearly 500 Chicago Teachers Union-represented teachers ended a successful five-day strike and won a tentative contract in the unlikeliest of places — a charter school network. This was the first charter school strike in U.S. history! (Chicago Tribune, Dec. 10) Teachers shut down 15 schools where they teach more than 7,000 students, who are 90 percent Latinx. These educators, who earn up to $13,000 less than their counterparts in the Chicago Public School system, work for Acero, formerly known as the UNO Charter School Network, which went union five years ago.

“This is a victory for every educator who sees children getting short-changed by privatization and charter operators putting their business models over the needs of our students,” said Chris Baehrend, chair of the CTU Charter Division. (CTUlocal1.org, Dec. 16)

The San Francisco contract, like all eight settlements, marks historic level wage and benefit increases; sexual harassment protections, including removal and banning of guests who violate women workers; and bargaining power for workers as the hospitality industry tries to introduce automation in hotels.

UNITE HERE Local 5 (Honolulu) President Gemma Weinstein noted that “One job should be enough” was a constant chant on picket lines and sign slogans. (bigislandnow.com, Nov. 28) Union members all over the country walked the lines in solidarity with UNITE HERE members.

UCW started at the University of Tennessee-Knoxville in the late 1990s to organize professors, custodians, grad students and cafeteria workers into one big union. Even without collective bargaining rights, they won major contract improvements and defeated outsourcing work to private contractors with collective action and protest.

UCW has now expanded to Georgia and Mississippi, with workers at Ole Miss working closely with both chapters. “We want to build and sustain social and economic justice in our workplaces and in our communities,” Jessica Wilkerson, a professor of Southern studies and a lead UCWM organizer, told the Daily Mississippian. “We’re interested in the broad range of labor issues. If you come to work and feel unsafe because of racism, sexism or homophobia, that’s a labor issue. That would be something, as a union, we would want to address.” (thedmonline.com, Nov. 29)