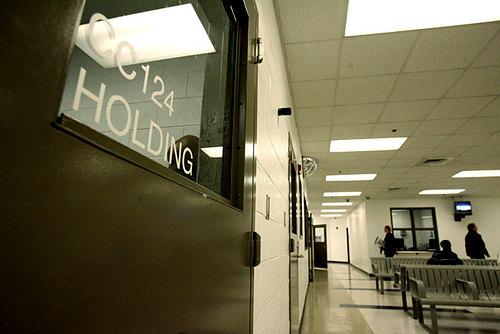 In Georgia, inside the Gwinnett County jail.

Central to the lawsuit are restraint chairs used to strap down inmates’ hands, feet and heads. In one instance, guards strapped down a military veteran with PTSD after also stripping him of his clothes. Similar brutality has been meted out to several other inmates with physical and mental disabilities.

Another plaintiff, 26-year-old Shelby Clark, was severely beaten and partially blinded after guards hit her for having a mental breakdown — one hit her in the face several times. (tinyurl.com/yahku7dx)

Such inhumane tactics are used by the jail’s “Rapid Response Team,” which receives orders and direction from the police officers charged. According to one of the attorneys filing the suit on behalf of current and former inmates, video evidence shows that there is often no apparent reason for many of the team’s violent assaults. Guards can be seen in some cases entering cells using “nonlethal” SWAT tactics on noncombative victims — many of whom are then strapped down for hours.

Created in 2008, the Rapid Response Team has a long-established record of unwarranted and excessive force. The current lawsuit was preceded by a similar suit by other inmates in 2015 — the case is still pending.

The Gwinnett County Sheriff’s Office is far from an anomaly. The prison is not a “failing in the system,” but displays the brutal efficiency of a prison system meant to mentally and physically break those it cynically claims to be “rehabilitating.”

The jail illustrates perfectly how the prison system, which functions as an apparatus of class rule and white supremacy, both exacerbates and criminalizes mental health conditions in working-class people subjected to its tortures.