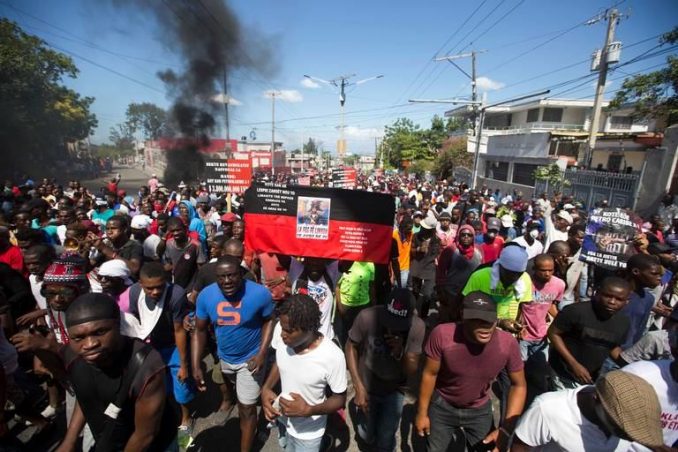 October 17 is a national holiday in Haiti, marking the assassination in 1806 of Jean-Jacques Dessalines. He led the Haitian people to victory in 1804 against French slavemasters.

The politicians and lawyers who called a protest for this date were hoping for a peaceful, legal protest, respectfully putting forth people’s concerns, not only in the capital, Port-au-Prince, but also in Petit-Goave in the west, in Jeremie in the southwest, Jacmel in the south, St. Marc and Gonaïves in the center, Cap-Haïtien in the north and Ouanaminthe in the northeast. These are most of the major cities in Haiti.

The protests were the largest in Haiti since one in 2004 supporting then-President Jean-Bertrand Aristide, a few weeks before his overthrow by forces that included a U.S. Seal team.

But as soon as people’s feet hit the pavement, their anger and militance burst out. Videos available on YouTube show thousands of people filling the streets of Port-au-Prince, demanding to know where the money from PetroCaribe has gone.

PetroCaribe is the program of the Venezuelan government that offers petroleum products at a discounted price, financed by a 1 percent loan due in 25 years. Governments that got the deal were expected to devote their profits to economic development. The Haitian Senate reported last year that $3.8 billion of PetroCaribe profits had vanished and pointed to some of the politicians and business people who took it.

The slogan “Kot Kòb Petwo Karibe a?” (Creole for “Where is the PetroCaribe money?”) was a common chant. Some T-shirts worn in the protests pointed to Sophia Martelly, wife of Michel Martelly, Haiti’s last president.

The crowds of mainly young people danced and chanted as they ran alongside bands during the march. In an interview on the French channel TV5, one protester condemned the low minimum wage — which the government recently raised to $6 a day! — the high cost of living and the lack of education and jobs.