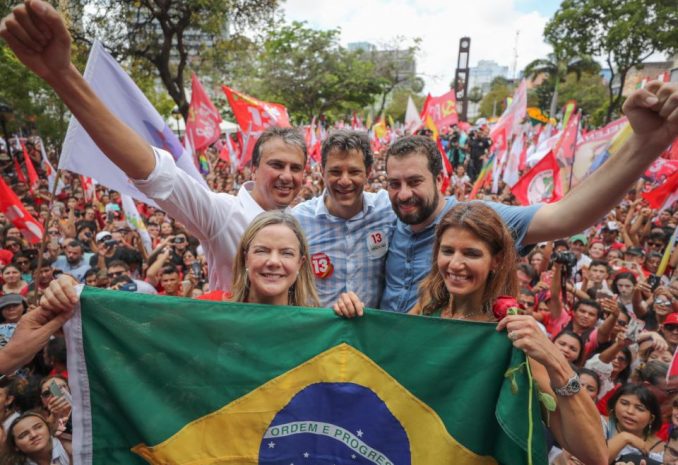 Tens of thousands of demonstrators in Brazil’s large and small cities mobilized on Oct. 20 in an attempt to stop ultra-rightist Jair Bolsonaro from winning the second round of the country’s presidential election, taking place on Sunday, Oct. 28.

Anti-Bolsonaro women’s demonstrations on Sept. 29, known as #EleNão (Not him), inspired this new round of rallies, supported this time by a broad united front of organizations and parties and led in many cities by women’s organizations.

Bolsonaro is an openly misogynist, homophobic, transphobic, anti-Indigenous, racist and anti-communist candidate. Those are not just words to insult him. They describe his very being. People worldwide in solidarity with Brazil’s workers and poor are asking, how did he arise and how can he be stopped?

This former army captain revels in his blatant insults against people who have to bear every form of oppression, salutes the military dictators who ran Brazil from 1964-85, and backs military and police killings in the shanty towns, called favelas, that surround big Brazilian cities.

Like a classical fascist politician, Bolsonaro pretends to be anti-rich and a political outsider. Unlike classical fascists, he has no mass fascist party backing him. He counts instead on support from the militarized police, the army and many of the evangelical churches, to which a fifth of Brazilians belong.

During a serious capitalist economic crisis that has impoverished hundreds of millions of people, Bolsonaro has ridden a wave of ruling-class and middle-class hostility to any state assistance for Brazil’s poor.

This ruling-class hostility has been directed mainly at the reformist Workers Party (PT) and has led to a popular rejection of all the usual politicians as corrupt.

The ruling class’s powerful media, like the O Globo network, have been pounding away on corrupt politicians and especially blaming the Workers Party, which governed Brazil from 2003 to 2016. In 2016, PT President Dilma Rousseff was impeached and pushed out of office by a movement in Congress that framed her up for alleged corruption.

Most politicians who conspired against Rousseff were themselves under investigation — for corruption.

The most popular PT leader, Luis Ignacio “Lula” da Silva, who was president from 2003-2011, was planning to run for president again. Polls had him leading all the other candidates in the first round. But Brazil’s judges brought charges against Lula to jail him and keep him from running and winning the election.

With Lula unable to run or even campaign from prison, the PT nominated Fernando Haddad in a united campaign with Manuela d’Ávila of the Communist Party of Brazil (PCdoB). They are now trying to reach out for broader support.

The PT-PCdoB alliance in no way represents a revolutionary break with Brazilian capitalism. Thus, even if it wins the election, the economic and political crisis will continue, as will the attack by Brazil’s oligarchy upon its workers and poor people.

Nevertheless, nearly all left and revolutionary parties support election of PT-PCdoB as the best way at present to defend democratic rights as they continue to organize to make more gains for the working class.

This time, many organizations joined to call the Oct. 20 demonstrations. They included some of the smaller left parties like the Socialism and Liberty Party (PSOL) and the Brazilian Communist Party (PCB), as well as the Brazilian Socialist Party (PSB).

Some of these left parties ran their own candidates or for other reasons didn’t support Haddad-d’Avila in the Oct. 7 first round. Now they give at least critical support to electing Haddad.

The landless movement (MST), the homeless movement, LGBTQ forces and other social movements also joined in the Oct. 20 mobilizations.

In the capital, Brasilia, according to the Oct. 21 edition of the web newspaper Vermelho, “Women for Truth and Justice” held a public event that brought together more than 10,000 people in the center of the city. The paper reported that while the Federal District “has a conservative majority, it can count on finding great resistance from popular movements and unions.”

A meeting in Belo Horizonte was organized by the “women of the Popular Brazil Front in Minas Gerais” state. In Fortaleza, where Haddad himself spoke, 50,000 people came out. Both cities have populations of about 2.5 million people.

According to the PT website, meetings of some sort took place in 180 cities. These mobilizations encouraged those hoping to reverse Bolsonaro’s apparent advantage. Whether they will succeed in doing this is still a big question.

Bolsonaro got 46 percent of the first round valid votes, as opposed to 29 percent for Haddad. The usually favored neo-liberal candidates who represent Brazil’s ruling class have been so discredited by corruption charges that most of the rich have thrown their support to this former army captain. They much prefer him to the PT, even though it is reformist.

The result is that media giants like the O Globo network continuously attack the PT and thus aid Bolsonaro, who also dominates the social networks, publishing slanders against his opponents. The Haddad campaign must use enormous resources to counter these blatant lies.

U.S. imperialism and especially the current right-wing administration in Washington of course favor Bolsonaro. They want a president in Brazil who is hostile to Cuba, Bolivia and especially Venezuela. It is telling that the ultra-rightist ideologue Steve Bannon offered electoral advice to Bolsonaro in the first round.

With its population of about 208 million people, an area of more than 3 million square miles, and a border with every other country in South America except Chile and Ecuador, Brazil is equivalent in size to about half the continent.

The Oct. 28 election, while it will be an important step for the struggle of Brazil’s workers and all its oppressed peoples, is not the final step. Neither the pro-fascist Bolsonaro nor the reformist Haddad will be able to solve the crisis of world capitalism. The class struggle will continue.