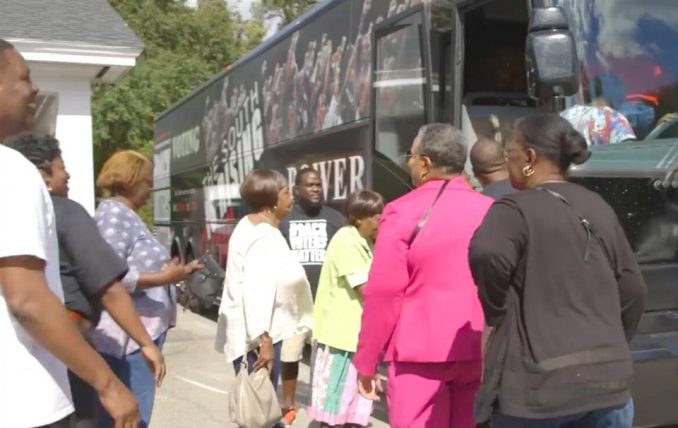 Dozens of seniors were told to leave a bus that was on its way to the polls in Georgia.

Atlanta — Major newspapers and national TV news programs have carried stories about the close Georgia governor’s race between Demo­crat Stacey Abrams, who is seeking to become the first Black woman governor in the country, and Brian Kemp, Republican secretary of state since 2010. Kemp’s office oversees voter registration and election results. Kemp has refused to resign from his position as secretary of state and from overseeing the very election he hopes to win.

With Black people comprising at least one-third of Georgia’s electorate, and with the historic and bloody century-old battle to secure voting rights by formerly enslaved people in mind, the question of ongoing, deliberate voter suppression in this election is inevitable.

During the Jim Crow era of state-enforced segregation, there were crude and blatant methods of denying the vote to African-American people. These ranged from a poll tax, having to name the exact number of beans in a jar, all-white primaries to evictions, job loss, physical threats, arson, beatings and killings.

Nowadays those methods of voter suppression have generally been replaced by more sophisticated and often hidden means of restricting Black voter access. Much of this is done administratively behind closed doors.

One technique practiced during Kemp’s time in office is purging from voter rolls people who move frequently or fail to vote in several elections.

According to the Brennan Center for Justice, 1.5 million voters were removed from the rolls between 2012 and 2016 — more than double the number from the previous four-year period. The center’s studies show the removal of inactive voters impacts people of color at a greater rate than other groups. The “purged” voters rarely know they have been removed unless they take the time to check with the secretary of state’s office.

Kemp won his secretary of state position in part on a platform of promises to prevent “illegals” from voting and to ferret out voter “fraud.” He also got some of the first and most restrictive voter ID legislation in the U.S. from the Republican-controlled state legislature. Such legislation has also been shown to most adversely affect Black and poor voters.

In 2013, the U.S. Supreme Court decision in Shelby County v. Holder diminished the pre-emptive enforcement powers of the 1965 Voting Rights Act. These had required federal approval of changes in voting policies and practices in areas where local and state governments have historically discriminated by enacting repressive voting requirements. This requirement is no longer in force in Georgia or other formerly designated areas.

Gubernatorial contender Abrams, while the Democratic leader of Georgia’s House of Representatives, founded the New Georgia Project, whose goal was to register 800,000 new voters. Hundreds of volunteers from NGP and other groups have gone door-to-door, set up registration tables at festivals and community meetings and on street corners, and signed up hundreds of thousands of voters, mostly Black Georgians.

In 2014, Kemp alleged that massive numbers of the Project’s registration forms were forged, duplicates or otherwise erroneous, and sued the organization for fraud and waste of taxpayer money caused by processing thousands of applications. Although the court dismissed his lawsuit, Kemp has continued his claims of “voter fraud” against the NCP.

Kemp instituted a departmental “exact match” policy in 2016. The Georgia legislature then passed a 2017 law for the same purpose. This required a person’s information on a voter registration application to match exactly what is on their state driver’s license or in Social Security Administration data.

“Exact match” means that applications can be challenged or purged based on typos or clerical errors, as well as missing accent marks or hyphens. Though forms are accepted at a variety of state agencies, Secretary of State Kemp’s office determines final registration. At that point, small errors can be either accepted or ignored — depending on the applicant’s party affiliation.

October 9 was the last day to register to vote in Georgia’s Nov. 6 general election, in which Kemp is running against Abrams. That day the Associated Press revealed that over 53,000 applications were “on hold” in Kemp’s office, unprocessed because of “exact match” issues.

Two days later a coalition of civil rights and voting rights groups filed a lawsuit seeking an injunction to allow all those people on hold and all those purged from the rolls since November 2016 due to “exact match” criteria to vote. The lawsuit asserts that 80.15 percent of those denied voting rights are African-American, Latinx or Asian-American. (tinyurl.com/y8yah2vm)

While Kemp’s office issued a statement that people would be allowed to vote on Nov. 6 if they produced a legal ID at their precinct, no explanation has been sent to applicants about why they have not received voter registration cards.

Another battlefront in the Georgia voting rights struggle is the closure of polling sites — more than 200 so far, many in rural areas, forcing people to drive long distances and deterring those without transportation. There is also a dubious pattern of rejection of absentee ballots, such as the more than 50 percent of those ballots sent in by Asian and African-American residents of Gwinnett County, a minority-majority county outside Atlanta. (tinyurl.com/ydatjjxy)

However, the determination of 40 Black seniors in Louisville, Ga., tells the story of resistance to the real “fraud” in this election: white supremacist voter suppression.

On Oct. 17, a bus belonging to the nonpartisan group Black Voters Matter arrived at a county-operated community center to take the seniors to an early voting site. But once they were on the bus, a Jefferson County worker ordered them off, citing “concerns” of unpermitted “political activity.”

Undeterred, the seniors waited for replacement transportation, singing and dancing, recounting past challenges to their right to vote and declaring, “Ain’t nobody gonna turn us around.”