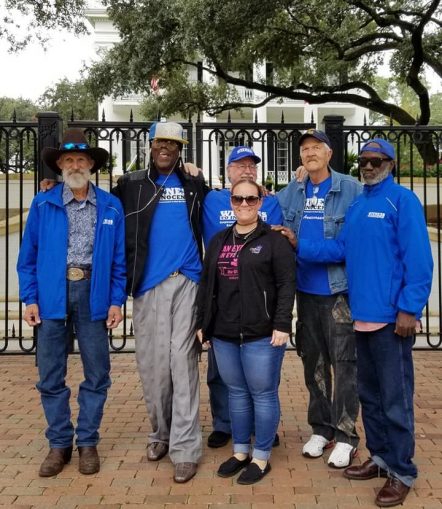 Austin, Texas — Death row families, death row exonerees, activists and abolitionists gathered at the Texas Capitol today in a powerful show of unity to demand that executions stop and the death penalty be abolished.

The crowd welcomed five survivors from Witness to Innocence, who shared what it was like to be sent to death row and face execution even though they were innocent. As Albert Burrell, Shujaa Graham, Ron Keine, Gary Drinkard and Derrick Jamison introduced themselves, the crowd roared in solidarity.

“We owe them a debt of gratitude for traveling to Austin as living examples of innocent people who survived years on death row before walking free as exonerees,” said organizer Scott Cobb of the Texas Moratorium Network.

Between tears and hugs and fists in the air, the families of people on death row took the stage. They live with the fear of death hanging over them and their families every day, knowing their loved one could be the next person added to Texas’ execution schedule.

Families of George Curry, Louis Castro Perez, Juan Balderas, Humberto Garza, Paul Storey and Jeff Wood each introduced themselves, as did the family of Ramiro Hernandez, who was executed in 2014.

Activist Nicole Combs spoke about the six women on death row in Texas. Combs is an organizer with Help Inmates Smile, which supports all on death row in Texas. Last weekend in Dallas, the supporters of one of the women, Darlie Routier, who has steadfastly proclaimed her innocence, held rallies at the courthouse to demand long-sought-after DNA testing.

As the activists marched through downtown Austin from the Capitol to the governor’s mansion, smiling onlookers gave thumbs-up to the chants and messages on the signs.

This public support is reflective of changing views on capital punishment even in Texas, which has executed 555 people since the reinstatement of the death penalty in 1976. There were 406 executions in the U.S. in 2000 and just 23 last year.

The number of executions has also declined in recent years. In 2000, when Texas executed 40 people, the state averaged one execution every 12 days. Now executions are down in Texas and around the country.

Washington state’s Supreme Court declared the death penalty unconstitutional on Oct. 11, bringing the total to 20 U.S. states without capital punishment and four with a moratorium on executions. Most states that have the death penalty on the books do not use it. Executions happen most often in former Confederate states. The number of people being sentenced to death there has also declined.

Organizer Delia Perez-Meyer, sister to Louis Perez on death row, said after the march and rally: “We are so thankful to our beloved exonerees who traveled to Austin to support our families in our efforts to abolish the death penalty. … It was a wonderful weekend filled with great joy, lots of laughter and tears, remembering those who have passed and looking to the future when we no longer kill our own citizens in the name of justice!”