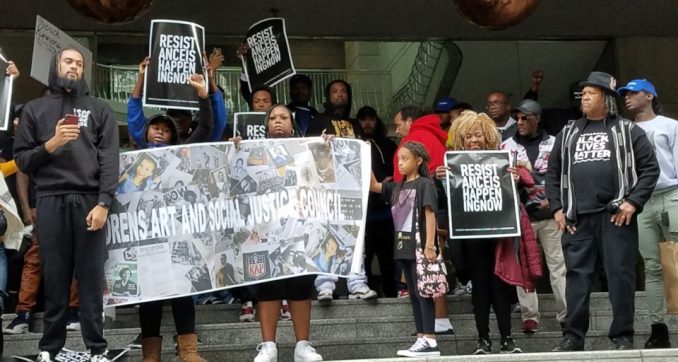 The family of Patrick Kimmons, Oct. 6.

Portland, Ore. — Police here shot another young Black man, Patrick Kimmons, about 10 times in the back on Sept. 30, killing him.

A witness, Ayan Aden, was parked at the scene with her boyfriend. They saw Kimmons run by and drop his gun. They heard the police yell “Stop!” and then immediately open fire as Kimmons continued running away from the cops. At an Oct. 1 vigil, Aden said, “The shooting was excessive. He was clearly running away and threw the gun away.” (oregonlive.com, Oct. 2)

Within days after the shooting, hundreds of people blocked traffic at the site of the killing and set up a memorial with signs, pictures of Kimmons, candles and flowers that line the block. All week, people have held a vigil for Kimmons. They have been chanting “Say his name! Patrick Kimmons!” and “Black lives matter!”

On Oct. 5, 200 angry protesters and members of Kimmons’ family gathered near the memorial with signs reading “Police violence is white supremacy,” “Stop racist police terror” and “Resistance is happening now.” They marched through downtown Portland to condemn the killing.

Kimmons’ family spoke from the steps of the Justice Center demanding police accountability for the killing. Charles Kimmons, Patrick’s uncle, said, “We need to fight this all the way to the end. These cops need to be locked up.”

“How in the hell is it fair to shoot a man that is no longer a threat to you?” said another family member. “This brother was killed in cold blood by the spineless cop that pulled the trigger. How are you a threat when your back is turned? They have racism and hatred in their hearts.”

Teressa Raiford from Don’t Shoot Portland said of Kimmons, “He was a child, he was a father, he was a brother and he was a son.”

At one point, a driver plowed through the march into a protester, pushing him around a park block. The protester was not injured. Protesters chased the car, screaming furiously at the driver.

Kimmons’ death was the third police shooting of an African-American man in Portland this year, and the second fatal shooting. Portland, with a population that is 6 percent African-American, has a history of racial profiling.

In contrast, a white man in Florence, S.C., after killing a Black cop and seriously injuring six other policemen, was not shot and killed by police. He and his son were brought in after a two-hour standoff in which he opened fire on cops with a rifle.

Protesters are angry that police have not yet released forensic analysis or coronary reports on Kimmons’ death. They are demanding the truth from the two cops, Sgt. Garry Britt and Officer Jeffrey Livingston, who said they saw muzzle flashes and fired multiple times at a man who they say turned toward them holding a gun. The two cops are on paid administrative leave as police continue to investigate the shooting.

Kimmons’ mother, Letha Winston, asked why police had to shoot her son instead of arresting him. She has launched a GoFundMe campaign to raise money for his funeral and other expenses.