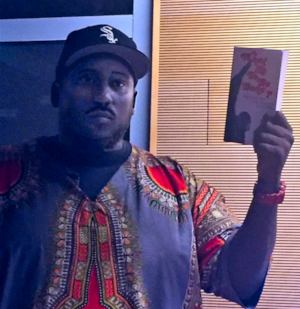 Mychal Odom holding Lenin’s ‘What Is to Be Done?’

San Diego, Calif. — Professor Mychal Odom gave a historical talk marking the 80th anniversary of the publishing of C.L.R. (Cyril Lionel Robert) James’ book, “The Black Jacobins,” at the Central Library in downtown San Diego on Oct.1. “The Black Jacobins,” printed by the British publishing house Seckel Warburg in 1938, is a classic account of the Haitian rebellion of 1791-1803, the only successful slave revolt in modern world history.

After welcoming everyone, Marc Chery, former manager of the Malcolm X Library and current supervisor of the Literature, Language and History section of the Central Library, introduced Odom.

Odom began his talk by displaying an image of C.L.R. James taken in 1972 in San Diego at a Congress of African Peoples Conference. James’ presence in San Diego underscores the international reach of his work. He was a communist who participated in and supported all forms of Black Liberation struggles not only as a scholar but in the streets.

Odom began his presentation, speaking on incidents in the life of C.L.R. James that many may not know about; for example, James was a cricketer and an accomplished track and field athlete, who set a Trinidadian record in the high jump while at Queens Royal College from 1918 to 1922.

Odom spoke of other works of literature by James that chronicle the Haitian Revolution and led to the first printing of “The Black Jacobins.” James produced a play on the life of Toussaint L’Ouverture starring Paul Robeson. He wrote a pamphlet, “A history of Negro Revolt,” later retitled “A History of Pan-African Revolt,” followed by his masterpiece, “The Black Jacobins.”

Odom had a stack of books that he referenced as he spoke about the role of literature studies in producing C.L.R. James’ political ideology; one of the books he picked up was “What Is to Be Done” by Vladimir Lenin, the leader of the Russian Revolution, explaining that “What Is to Be Done” is also the title of a 19th century Russian novel about political and ideological struggle.

Everyone listened intently as Odom gave a historical, well-researched, thorough perspective of the continuous radical resistance of the enslaved Africans in Haiti and their continued fight for freedom, which resulted in Haiti declaring independence in 1804 after defeating what was the most powerful army of the day: the Grand Army of France.

Odom acknowledged all the organizations that supported this event, including Pillars of the Community, Unión del Barrio, the Friends of Malcolm X Library, Workers World Party, the Committee Against Police Brutality, and students and community members who took the time to come on a Monday evening to participate in this important discussion.

Odom asked everyone to take a moment of silence for Paul Pablo Aceves, a longtime member of Unión del Barrio, who dedicated his life to the many struggles in San Diego. Pablo Aceves had joined the ancestors the previous weekend.

The last 45 minutes of the meeting were open for questions and comments.

Professor Odom’s research emphasis is in the history of Pan-African and Black internationalist social movements. He is currently working on a book manuscript titled “From Southern California to Southern Africa: Trans-local Black Internationalism in Los Angeles
and San Diego from Civil Rights to Anti-apartheid, 1960 to 1994