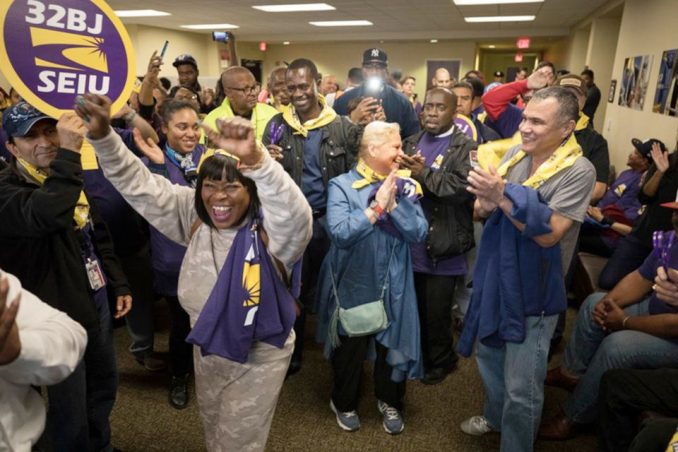 New York — “We did this together, we fought for so long and we won!” Gertrudes Lopez-Ortiz, a cabin cleaner at Newark Liberty International Airport told the Local 32BJ news service. “Now it is a dream come true for me and my co-workers! I was here when the Port originally promised this in 2014. Our hard work, and the support of our brothers and sisters in 32BJ is paying off.” (seiu32bj.org, Sept. 27)

What the 14,000 workers organized by 32BJ at New York City’s airports — LaGuardia, JFK and Newark, three of the busiest airports in the U.S. – won is a minimum wage of $19 an hour by 2023. Their current contract establishes medical insurance, days off, fair scheduling, but not minimum wages.

This wage will be reached in stages. On Nov. 1, the minimum will be $13.60 an hour for workers in New York, up from $13, and $12.45 an hour at New Jersey’s Newark Liberty, up from $10.45. The Port Authority (PANYNJ) used its power to impose the new schedule on the subcontractors that supply services like baggage handling, aircraft cleaning, wheelchair pushing and terminal cleaning.

32BJ President Hector Figueroa said airport workers deserve everything they’ve worked and fought for. His union conducted a series of one-day strikes and protests at the three airports.

“Airport workers are on the front lines of ensuring safety and improving services at our airports. They greet passengers, clean the terminals and airplanes, and load bags into planes,” said Figueroa in a statement.

This victory shows that the fight for $15 and a union is still strong. The PANYNJ had to extend higher wages to all the workers to keep nonunionized workers from joining a union, which would give them an $8/hour raise.