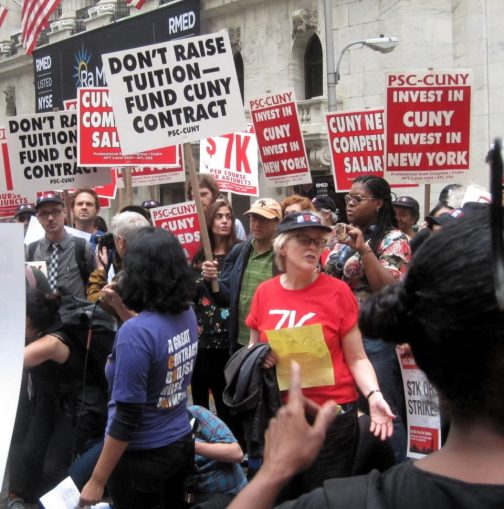 New York — More than 500 workers marched from the Stock Exchange to 100 Wall Street on Sept. 27 to demand a fair contract for the 30,000 workers the Professional Staff Congress, American Federation of Teachers Local 2334, represents at the City University of New York (CUNY). Most of the marchers were members of the PSC, but there were contingents from Service Employees Local 32BJ, the Council of School Supervisors and Administrators, the New York Public Interest Research Group and the Fast Food Workers Organizing Committee.

The PSC’s main demand is to increase the pay for adjuncts from $3,200 a course to $7,000, which will give them a living wage in the New York area. It is also demanding a fully funded 5 percent raise for the other CUNY workers it represents.

The march went to the offices of Bill Thompson, chair of CUNY’s Board of Trustees and chief administrative officer at Siebert Cisneros Shank & Co., an investment bank located at 100 Wall Street.

At the rally, held in front of Thompson’s office as the workers in the area streamed past, PSC officers pointed out that while Wall Street made $25 billion in profits last year, CUNY’s budget was $3 billion — to educate 275,000 enrolled students. The money is there on Wall Street; more of it should be spent on social needs, like public higher education.

Close to 40 percent of CUNY’s students were born outside the mainland U.S. Fifty-four percent have household incomes of less than $30,000, and 38 percent have incomes less than $20,000. They deserve the same quality of education as New York City’s Columbia University students, whose median family income is $151,000. Only 3 percent of Columbia students come from poor families that make less than $40,000 a year.

The PSC’s 30,000 members are ready to fight for the raises and investment needed to ensure an intellectually rich college education for CUNY students.

“By failing to invest adequately in CUNY,” said PSC President Barbara Bowen, “New York is making a policy decision not to invest in the future of hundreds of thousands of working-class, poor and middle-class students. This rich city, in this rich state, must do better. CUNY needs competitive salaries that would allow the university to keep the talented, committed faculty and staff students need. And CUNY’s underpaid adjuncts need wage justice.”