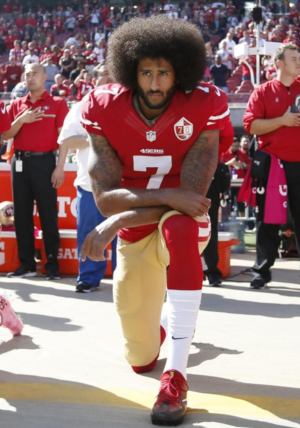 Nike announced on Sept. 3 that former National Football League star Colin Kaepernick would be the face of the company’s 30th anniversary “Just Do It” campaign. In the ensuing media coverage, it was revealed that Kaepernick had never lost his endorsement from the athletic apparel titan and had remained on Nike’s payroll even after being closed out of the NFL.

Nike blasted out a broadside meme featuring Kaepernick’s face and the quote, “Believe in something.  Even if it means sacrificing everything.” Also announced was that Kaepernick had trademarked #IMWITHKAP and planned to produce a line of apparel.

The news caught Kaepernick’s supporters and detractors equally by surprise and reinvigorated the public debate over Kaepernick’s public protests against racism during the U.S. national anthem in 2016.

Nike’s endorsement of Kaepernick’s civil disobedience is not without historical precedent.  In 1944, Swedish economist and sociologist Gunnar Myrdal argued that the U.S. had a particular dilemma. Its old racist capitalist order could not stand. Civil disobedience, decolonization, the persistence of Jim Crow discrimination in the U.S. despite the defeat of European fascism in World War II — all this made visible the contradictions in U.S. political structures that claimed to be for “democracy” and “equality.”

As a result, the U.S. government and corporations began to put forward liberal policy reforms in matters of race in an effort to win over African Americans, as well as the hearts and minds of people in Africa and other parts of the decolonizing world. The desegregation of the military and of professional baseball; the Supreme Court ruling against school segregation in Brown v. Board of Education, which overturned its “separate but equal” Plessy v. Ferguson ruling of 1896; U.S. state-sponsored global tours of jazz musicians and basketball players; and even Coca-Cola’s endorsement of the Rev. Dr. Martin Luther King Jr. in 1964 — all reflected this turn toward “racial liberalism.”

Visible in a 1954 film by Black-owned Johnson Publishing Co., in cooperation with the U.S. Department of Commerce, “The Secret of Selling to the Negro Market,” the discernible goal was to acquire Black consent to the U.S. Cold War liberal order.

But the result was the contrary. Racial liberal reforms amid continued racist violence, segregation and class oppression produced decades of Black revolt.

Now, in 2018, there is Nike’s Kaepernick campaign, concluded after a spring and summer of heightened conflict between NFL players and owners. NFL Commissioner Roger Goodell announced a new policy in May that would sanction players who did not stand for the national anthem, as Kaepernick had refused to do during 2016.

With the even more punitive belligerence of Dallas Cowboys owner Jerry Jones, it seemed the NFL owners had triumphed over the players. Yet some owners, such as the New York Jets’s Christopher Johnson, began to break with the decision as player dissent increased. Johnson, for instance, promised to pay the fines of his players and not punish any dissenters. The most defiant NFL player was Tennessee Titans All-Pro defensive end Jurrell Casey, who promised continued protest.

The NFL Players Association filed a grievance against the policy on July 10, asserting that the NFL acted “without consultation with the NFLPA, [which] is inconsistent with the collective bargaining agreement and infringes on player rights. On July 19 the NFLPA agreed to a “standstill agreement” with the NFL.

The NFLPA’s resistance underscores the divide by race between workers and owners in the NFL. Seventy percent of players are Black. But only one-fourth of the head coaches are Black. There are no Black owners. NFL viewership mirrors U.S. demographics with 75 percent white viewers and 15 percent Black viewers.

Yet for Nike, undoubtedly the top NFL sponsor, the numbers and the economics are quite different.

In March, Nike extended its contract with the NFL for an undisclosed amount of money, though it’s known to have exceeded the previous $1.1 billion agreement. In 2016, Fortune magazine reported that people of color comprised 52 percent of Nike consumers and Black people 21 percent.  Forbes recently noted that over two-thirds of Nike consumers are under 35 years old.

People of color and youth back Kaepernick

For the past two years, it has been constantly reported that the vast majority of young people and people of color support Kaepernick, with his largest support among Black youth.

Nike’s campaign sparked an immediate backlash from many parts of conservative white “America.” Some people publicly burned their Nike shoes — sometimes with the shoes still on their feet! Some stores have proposed Nike liquidation sales; a handful of small colleges have abandoned their contracts with the shoe giant. On Sept. 4, these reactionary protesters and conservative columnists rejoiced in the news that Nike’s stock had dropped 3 percent.

However, since then the company’s online sales have risen 31 percent, suggesting Nike’s cost-benefit analysis of its sales ploy was accurate. As for Kaepernick, he launched a line of #IMWITHKAP football jerseys retailing at $180 each, with all the proceeds going to his nonprofit foundation, Know Your Rights.

For some conservatives and some progressives, the Nike campaign is a commercial ploy or a capitalist appropriation of grassroots struggle. Certainly Nike’s endorsement of Kaepernick’s civil disobedience does not obscure the company’s history of oppressive labor practices in globalization, nor its silence amidst public outcry over the authenticity of Nike’s clothing line, Jordan Brand, named after National Basketball Association great Michael Jordan.

Yet Kaepernick is a worker, and his rebellion has been defined as part of the workers’ struggle. Kaepernick’s collusion lawsuit against NFL owners, for denying him employment, has been allowed to proceed in the courts. The new Nike contract emphatically disrupts the NFL owners’ argument that Kaepernick’s value and skill have decreased over the past two years.

Professional sports has been a useful space for racial, class and intersectional struggle in the U.S. For instance, arguably the most profound solidarity with the Black Lives Matter movement has been from members of the Women’s National Basketball Association. Top NBA players such as LeBron James have also voiced support for BLM. For the second year in a row, the NBA champions, the Golden State Warriors, have declined to attend a meeting with Trump at the White House.

In the week preceding Nike’s announcement about Kaepernick, a Republican official called kneeling football players “baboons,” and Serena Williams was banned from wearing an outfit inspired by the Afro-Futurist, superhero film “Black Panther” at the French Open. Yet, when Colin Kaepernick and 49er Eric Reid, who has been outspoken in defense of Kaepernick, attended a Williams’s match at the U.S. Tennis Open, they were greeted with a standing ovation.

Nike’s endorsement of Kaepernick is recognition of the growing power of young people and people of color. Notwithstanding the doubts of many progressives and radicals, the past suggests this concession signals an amplification and strengthening in social movements.

History shows that moments of reform following oppressive rule often preface radical change. Because, instead of being co-opted, activists also recognize their power and begin to demand more control.