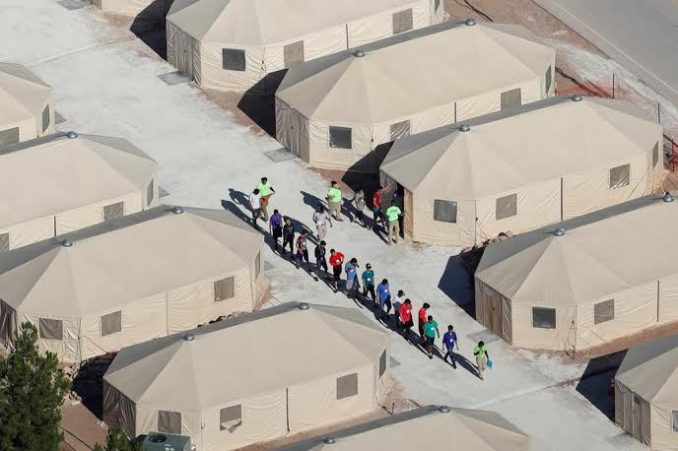 Migrant children lined up at an immigrant detention facility in Tornillo, Texas, run by the U.S. Department of Health and Human Services.

The heartless separation of migrant families at the Mexico/Texas border has galvanized a nationwide response, resulting in multiple occupations of Immigration and Customs Enforcement offices and popularizing the demand to abolish ICE.

This movement to stop Trump’s war on migrants has grown alongside a month-long prison strike, raising the opportunity for solidarity between both struggles against racist violence and oppression. The Boston chapter of FIRE (Fight for Im/migrants and Refugees Everywhere) organized a protest on Sept. 8 outside the Bristol County Jail with a loud sound system that broadcast solidarity with the strike demands.

Both movements evoke the 1971 Attica prison rebellion’s naming of prisons as “concentration camps for the poor,” since the true criminals of society — the rich, the warmongers, the police — never face justice for their 24/7 crimes against the people.

Now the Trump administration is scheming to withdraw from the 1997 Flores v. Reno settlement agreement, which prevents migrant children from being detained for more than 20 days.

The Department of Homeland Security is attempting to scrap that rule and be allowed to legally lock up migrant children and their families indefinitely. Withdrawing from the settlement would give the administration legal cover to create actual concentration camps.

The Flores settlement also requires the government to provide decent conditions for migrants who are detained. However, it has been widely reported that ICE and the centers it hires break that law repeatedly. Under detention, migrant children have suffered physical and sexual abuse, forced psychotropic drugging, neglect and exploitative labor.

Withdrawal from the Flores settlement would make it legal for ICE to run family detention centers without getting state licenses, immunizing it from lawsuits that could arise from the rampantly appalling conditions it oversees. More children would be kept in prisonlike facilities for the duration of their immigration proceedings, which can take up to a year.

DHS is attempting to discard the Flores requirements even as news broke on Sept. 12 that at least 12,800 children were still in detention centers. The report shows that the number of locked-up migrant children had increased fivefold in one year, contradicting the widely reported number of 400.

The number of 400 actually represents the children who have not yet been reunited with their families after the zero-tolerance, criminal separations of refugees and asylum seekers began at the border in May. It was originally 2,600 children; then a judge ordered the Trump administration to reunite the families. After it complied, only 400 of those children remain.

The other 12,800 still in detention are mostly children who made the journey from Central and South America on their own — without parents. Before the Trump crackdown, they could get out of a detention center if a family sponsored them. But now the Trump administration requires sponsors to be fingerprinted.

This further criminalization of migrants has dramatically reduced the number of people willing to be sponsors, and it has increased the number of children locked up in detention centers. Obviously, in the face of ICE/police collaboration, migrants don’t want to submit fingerprints to what has turned into a vicious deportation machine. But even those families willing to be fingerprinted in order to become sponsors have to wait months to complete  the process.

Of course, nobody can accept the DHS rationale for the fingerprints — that the government is vetting sponsors out of concern for the children. “Children who enter the country illegally are at high risk for exploitation by traffickers and smugglers,” a DHS spokesperson claimed.

“The main ‘traffickers’ and abusers of migrant children and their entire families are ICE agents, operating under orders from the racist Trump administration,” said Teresa Gutierrez, a FIRE leader. “Whether it’s the prisonlike conditions in for-profit detention centers — or situations like the one in Phoenix, where military contractor MVM kept dozens of children in vacant offices with no kitchen and few toilets — migrant children do need protection by the people’s movement and against incarceration.”