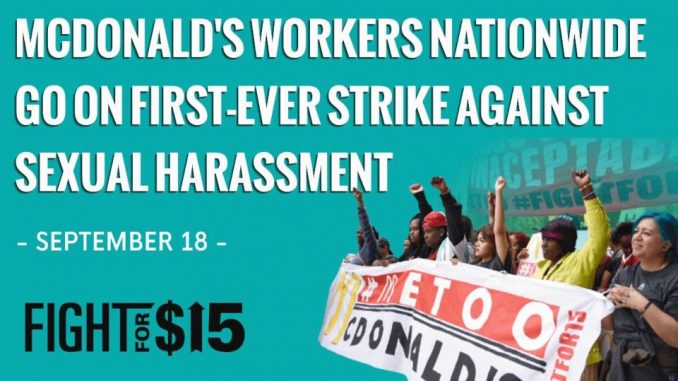 A historic strike is about to take place. On Sept. 18 at noon, McDonald’s workers in 10 cities across the U.S. will close their grills and cash registers and walk off the job to protest workplace sexual harassment. This will be the first multicity job action focused on sexual abuse in this country.

This is a courageous and groundbreaking action. These low-paid workers, many of them African-American, Latinx and im/migrant, are not represented by a union. They are taking a risk — but have decided that they have had enough abuse and are boldly standing up for their rights. They are taking the lead in this struggle. Low-wage workers in the service industry face some of the worst and most frequent incidents of sexual abuse, yet their stories don’t usually make the headlines. Because of their bravery and unity, this time they will be heard.

Sexual harassment is rife within the restaurant industry. The Restaurant Opportunities United Center reported in 2014 that 90 percent of women employees and 70 percent of male workers had faced a form of sexual harassment from managers, co-workers and customers. Workers are often repeatedly abused by the same perpetrators, very often supervisors. LGBTQ employees are also targets. The report also said that women who work in this industry filed more charges with the Equal Employment Opportunity Commission for this type of misconduct than workers employed in any other industry. (tinyurl.com/n9yw53h)

Arwa Mahdawi explained in the Sept. 15 Guardian newspaper that many of the organizers of this protest filed complaints with the EEOC about sexual harassment at McDonald’s franchises. They say that the company has done absolutely nothing to respond to their grievances. They are demanding that the fast food conglomerate implement and enforce policies to create a safer workplace with zero tolerance for abuse. One major demand is for the establishment of a national committee to deal with workplace sexual misconduct at the company’s franchises — a committee that would include workers.

A strike vote was approved by hundreds of members of women’s committees employed at McDonald’s eateries across the U.S. The strike comes at the same time that union-backed organizations have fought for improved working conditions and a $15-per-hour minimum wage at this restaurant chain which employs tens of thousands of workers at low pay. Two-thirds of McDonald’s workers are women and people of color.

‘It’s time to stand up for what we believe in’

Kim Lawson of Kansas City reports that women’s solidarity will strengthen their actions: “Everybody’s been brave about it. Now it’s time to stand up for what we believe in.” (APNews.com, Sept. 12) The walkouts will take place at many, but not all, McDonald’s restaurants in Chicago; Durham, N.C.; Kansas City, Mo.; Los Angeles; Miami; Milwaukee; New Orleans; Orlando, Fla.; San Francisco; and St. Louis.

The Fight for $15 campaign and TIME’S UP Legal Defense Fund are supporting the women workers in their struggle, which has been boosted by the growing movement against sexual misconduct. The defense fund is administered by the National Women’s Law Center Fund and was established to assist low-income workers fight on-the-job sexual harassment. Sharyn Tejani, TIME’S UP LDF director, says it has received thousands of complaints from women in every industry. She notes says that many are fired or demoted for reporting abuse: “Since nothing is done to stop the harassment, nothing changes.” (CNBC, Sept. 14)

McDonald’s has a history of sexual abuse violations. The EEOC has sued several of its franchises in the last 10 years for sexual harassment.  But most women have to struggle for justice on their own, a difficulty for young workers and those struggling to feed their families. Often the lowest-paid workers — those who are Black, Latinx, Indigenous, Asian and im/migrants  who desperately need their paychecks — are those targeted by abusers.

No one should have to face sexual assault to earn a living!

A hero in this struggle is Anita Hill. This African-American woman courageously testified before the Senate Judiciary Committee in October 1991 about the sexual harassment she experienced at the EEOC while working for Clarence Thomas, then a nominee for Supreme Court justice, who was ultimately confirmed. The all-white, all-male panel of senators, Democrats and Republicans, would not allow other women who backed her testimony to speak. Overtly racist and sexist, they viciously ripped apart Hill’s words, grilled and insulted her, as did much of the corporate media.

Nevertheless, Hill told her story. For three days, millions were riveted to their televisions, watching her speak. Public attention was focused for the first time at a mass level on workplace sexual misconduct. Immediately following Hill’s appearance, thousands of women filed complaints about their own experiences of sexual abuse on the job to the same EEOC where, ironically, Thomas had harassed Hill.

Another hero is Tarana Burke, an African-American women who has not been given the recognition she deserves for her initiative in combating sexual harassment. In 2007, she established Just Be Inc., a nonprofit organization geared to helping women victims and survivors of sexual harassment and assault. She named her movement: “Me Too.”

The true history of the U.S. is one of sexual harassment and violence against oppressed people ever since European colonialists set foot on Native land, and throughout the enslavement of people of African descent, the Jim Crow era and beyond. Chicanx and Latinx immigrants have been sexually attacked in the fields and now in detention centers.

The capitalist class has assaulted the multinational, multigender, multigenerational working class in garment factories and laundries, hotels, restaurants, offices, on farms, in all workplaces.

Oppressed people have always resisted and strongly fought back against all forms of repression and exploitation. The history of the workers’ movement shows that women workers have gone on strike, walked off the job and marched for their economic and civil rights.

But now in this new phase of fightback, McDonald’s workers are sparking a struggle against sexual abuse and taking on this global multi-billion-dollar corporation. This is an inspiration to other unorganized workers throughout the service industries — and to unionized workers, too.