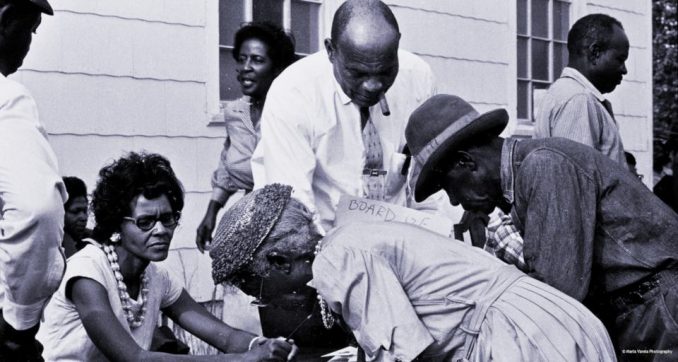 At the end of the U.S. Civil War, the 13th, 14th and 15th Reconstruction Amend­ments to the U.S. Constitution were ratified.

In 1865, the 13th Amendment abolished “slavery and involuntary servitude” — except for people convicted of a crime. In 1868, the 14th Amendment granted citizenship to African Americans, albeit second-class citizenship. The 15th Amendment, passed in February 1870, prohibited the denial of the right to vote based on a citizen’s race, color or previous condition. This included Black men, but not women.

On March 31, 1870, in Perth Amboy, N.J., Thomas Mundy Peterson became the first African American to vote, one month after the passage of the 15th Amendment. Some whites were appalled at a Black man voting. In the 1700s, Perth Amboy had served as a slave port.

While working in a horse stable, Peter­son had been approached and encouraged to exercise his voting right by attorneys who had worked hard but unsuccessfully to acquit abolitionist John Brown, leader of the 1859 anti-slavery Harper’s Ferry raid.

Peterson, who cast his vote in a campaign to revise Perth Amboy’s town charter, was subsequently appointed to a committee to work on the final version of the charter, approved by the state Legislature in 1871. A delegate to the Republican Convention, Peterson was also the first African American to hold elected office in Middlesex County and Perth Amboy’s first “colored” person to serve on a jury.

On Memorial Day (then called Decoration Day) in 1884, Perth Amboy awarded Peterson a gold medallion for being “the first Negro voter.” He later had to pawn the medal because of financial circumstances.

In 1989, the school where he worked as a custodian and handyman was renamed the Thomas Peterson Elementary School. A plaque honoring Peterson was recently unveiled in Perth Amboy’s St. Peter’s Episcopal Church, where he was a member and is buried. Peterson’s gold voting medallion is currently held by New Orleans’s Xavier University, a historically Black college.

Following the post-Reconstruction era, whites sought to deny Black citizens the right to vote and to serve on juries. Blacks have had to consistently struggle to secure and retain those rights unimpeded.

When the 13th Amendment abolished slavery and involuntary servitude “except as punishment for a crime,” that clause was deliberately added. Thus, Blackness was criminalized.

The amendment didn’t really abolish slavery but allowed it to live on legally in prisons and now in the current prison-industrial complex. The system of free or “for-pennies” prison labor is just another form of slavery.

Now, inmates and formerly incarcerated people who have been convicted of certain charges also lose their voting rights.

The 15th Amendment, ostensibly, prevents states or the federal government from giving preference to one citizen over another in the exercise of voting rights. Before the amendment was adopted, African Americans were excluded from voting, and there was no constitutional protection for anyone against discrimination imposed on the voting process at the federal or state level. After the amendment, Congress could enforce voting rights by “appropriate legislation.”

But courts interpreted the protections of the 15th Amendment quite narrowly. Limitations and exclusions were imposed on eligible Black voters, such as property ownership, poll taxes, literacy tests and repressive Black Codes throughout the South. Whites were exempted from these requirements by a “grandfather clause” if their grandfathers had been registered to vote. “White men only” primary elections reduced the influence of Black men in the political system.

White supremacists prevented Blacks from voting by threats, terroristic vigilante attacks, beatings and murders of Blacks who attempted to register themselves or others. Federal civil rights protections were not enforced, allowing implementation of racist, discriminatory, “Jim Crow” apartheid laws.

Ongoing struggle for right to vote

Organizing struggles and some broader interpretations of the 15th Amendment meant that African-American voter registration in the South gradually increased between 1940 and 1960. Registration had previously been as low as 7 percent of the eligible Black population.

By the 1960s, a massive voting rights campaign was underway in the South, spearheaded by local leaders like Fannie Lou Hamer in Mississippi and national leaders like the Rev. Dr. Martin Luther King Jr. Under pressure after the sacrifice, torture and martyrdom of many in this movement, Congress passed the Voting Rights Act in 1965, under President Lyndon Johnson, to further racial equality in voting in Southern states. This act made it illegal to prevent African ­Americans from exercising the right to vote. In 1966, the Supreme Court ruled that poll taxes were in violation of the 14th Amendment’s equal protection clause.

By 1976, 63 percent of Blacks in the South were registered to vote. The Voting Rights Act gave Congress the power and courage to establish additional legal coverage which determined that states and localities with a history of disenfranchising minorities, mainly in the South, must get federal approval before changing their voting procedures. This coverage was to be reauthorized seven times.

In 2013, however, the U.S. Supreme Court threw out the preclearance provision of the 1965 Voting Rights Act in its ruling in the Shelby County, Alabama v. Holder case. That decision stated that it was no longer necessary for Congress to enforce protections of the right to vote since discrimination is not as pervasive, flagrant, widespread and rampant as it was in 1965. No new coverage formula now exists for these protections.

People are left asking: Did the South really lose the Civil War?

As the 2018 midterm elections approach, Blacks face more subtle voter suppression methods, gerrymandering of state and local districts, and restrictive voter ID laws. Gloria J. Brown-Marshall, constitutional lawyer and professor at John Jay College in New York City, refers to the current situation as part of a centuries-long “Voting Rights War” of white resistance, power, dominance and rage stemming from a white supremacist ideology and fear that a growing number of people of color in the U.S. will eventually surpass the number of whites.

Voting while Black in the U.S. is still an issue as the racist system of oppression lives on.