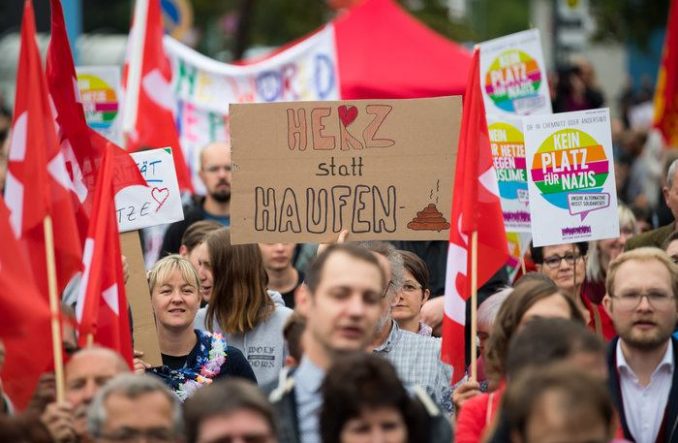 On Sept. 1, a traditional day for anti-war demonstrations across Germany, more than 4,000 anti-fascists, including both moderate and leftist forces, confronted a roughly equal number of anti-immigrant and other racist and openly Nazi elements on the streets of Chemnitz. The fascists disguised their mobilization as a “funeral march.”

The anti-fascists, marching under the slogan, “Heart, not hate,” managed to stop the march of the reactionaries at various street crossings in this industrial city, located in the state of Saxony in southeastern Germany. A large contingent of state and national police separated the demonstrations.

Five days earlier the fascists, with the full support of the ultra-right Alternative for Germany (AfD) party and the Pegida anti-immigrant movement, swamped the Chemnitz police and ran wild through the city, chasing and sometimes catching and beating people who looked like they might be refugees, immigrants or Muslims. These were mostly people from Arab and African countries.

The fascists fed on the false news story — spread in the corporate media — that a murder victim had been killed while defending a German woman from assault by asylum-seekers. Nothing was done in the media nor by the Christian Democratic leaders of Saxony to counter this lie, which the fascists used to mobilize from all over Germany. The actual victim of the killing, Daniel Hillig, had himself expressed anti-fascist sentiments and had a Cuban father, making the “funeral march” a fraud.

As in the United States, in Germany the complicity of the leading pro-capitalist politicians with the anti-immigrant movement, together with the pro-fascist sentiments of large sections of the police, makes it necessary for unions of workers and leftist parties to organize active, fighting mass movements to confront fascist and racist elements.