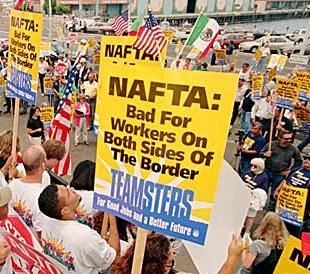 The North American Free Trade Agreement has helped the U.S. imperialist ruling class dominate both its junior imperialist neighbor to the north, Canada, and its neighbor to the south, Mexico — which is closely tied to Central and Latin America. At the same time it has enriched the owners at the expense of workers and farmers in all three countries.

Negotiated by the George H.W. Bush administration and signed into law by Bill Clinton in December 1993, NAFTA has brought tremendous benefits to big U.S. corporations that can maneuver to move production to wherever it is cheapest. This is why auto production is booming in Mexico, where workers report the average auto wage is around $2.50 — not the $8-10 an hour U.S. companies claim but which only a small handful of highly skilled workers receive. (AP, Sept. 25).

In 2017, the Mexican automotive industry employed some 840,000 workers both for the assembly of vehicles and for the production of auto parts.

Consider this statistic from the U.S. Department of Commerce: U.S. trade in goods and services with Canada and Mexico rose from $337 billion in 1993 to $1.11 trillion in 2015. This tripling of the dollar value of trade implies an even greater increase in profits.

Unifor has been very active in trying to build ties with the Mexican union movement. It has invited Mexican trade union leaders to Canada, its leaders have gone to Mexico, and it has raised Mexican issues in a number of demonstrations throughout Canada. Unifor represents most of the 88,000 workers in the Canadian auto assembly industry and the 120,000 workers making auto parts.

NAFTA devastated Mexican farmers. CBS News estimated in 2006 that 2 million Mexican farmers had lost their livelihood due to imports of highly subsidized U.S. corn, beans and rice. The U.S. Department of Agriculture estimated that 900,000 small Mexican corn farmers were forced off their farms to look for work elsewhere because U.S. agribusiness could undersell their corn.

This flood of displaced farmers into Mexico’s labor market contributed to the drop in real wages and to rising unemployment rates during the first 10 years of NAFTA. Displaced farmers who couldn’t find jobs in Mexico were forced to migrate to the United States.

Trump’s assertion that NAFTA is the “worst agreement ever” for U.S. business or workers is simply his own demagogy. He claims that by importing less and exporting more, ordinary U.S. people will gain. Some see Trump’s stance as a bargaining ploy for the U.S. to get more from Canada and Mexico and pay less. This approach does nothing to benefit U.S. workers.

Mexico’s outgoing president, Enrique Peña Nieto, wanted to sign quickly before the Dec. 1 transition, when his successor, Andrés Manuel López Obrador, takes office. It would be a last success for Peña Nieto and remove a major problem from the plate of López Obrador.

But the main reason why Mexico gave in was Trump’s threat to impose tariffs on all automotive imports, not just impose a quota. This would devastate the Mexican economy and destroy the employment of nearly 900,000 people. It would also affect U.S. workers who make parts that Mexican manufacturers include in the products they make for export.

The Canadian economy is more capable of withstanding U.S. threats than Mexico’s. A good example of Canada’s strengths is the tight links between plants in Canada and the U.S. auto industry for over 50 years. A 2004 study showed that 257,000 jobs in Michigan and $13 billion in annual production depend on the crossing between Detroit and Windsor, Ontario. Any action on Trump’s part to harm or destroy the Canadian auto industry would have a major impact on these quarter-million jobs.

NAFTA had already hurt the interests of working people in the three countries. Trump’s belligerent approach to trade risks making the lives of Mexican, U.S. and Canadian workers even harder.