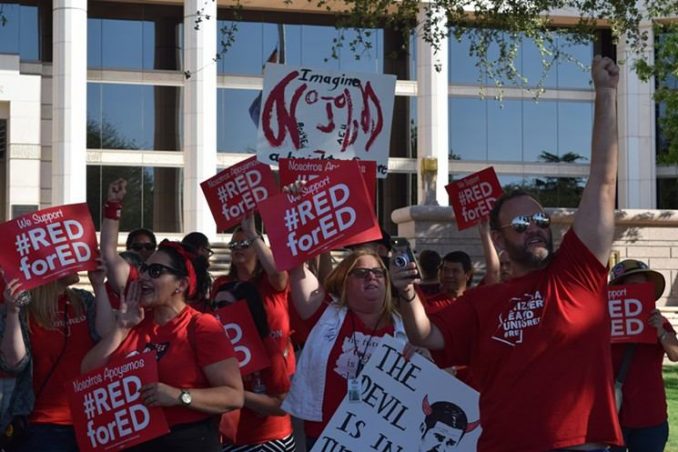 Educators and allies protest a ruling against school funding at the Arizona Supreme Court in Phoenix on Aug. 31.

Arizona education workers are once again in motion, following a stunning, reactionary decision on Aug. 29 by the state’s corporate-backed Supreme Court to remove Proposition 207, the Invest in Education Act, from the November ballot. The initiative would have increased school funding by $690 million. The ruling cannot be appealed.

Following the Arizona #RedForEd school workers’ strike in April and May, education employees initiated a petition campaign to collect the signatures required to get the proposal on the ballot for the upcoming general election.  They worked hard all summer and got 270,000 signatures, many more than the 151,000 legally required. The signatures were certified, and the measure was officially on the Nov. 6 ballot.

State officials had promised education workers a pay raise, as well as money for school supplies, materials and support staff.  The funding would specifically be used to reduce the overcrowded class sizes in a state where a majority of the student population is Latinx, Indigenous and African-American. Smaller class sizes have been proven to create a more productive learning environment, especially important for oppressed youth.

The Invest in Education Act would have imposed a progressive tax increase on wealthy Arizonans. However, the ballot measure was nixed as a result of intense pressure from a union-busting front group for the state’s Chamber of Commerce called Arizona for Great Schools and a Strong Economy.

Both the state Supreme Court and the pro-business, anti-worker Chamber of Commerce have the blessings of the far-right Republican-led Legislature, as well as Gov. Doug Ducey. Ducey once served as the CEO of Cold Stone Creamery, notorious for paying its workers low wages. He also served as state treasurer under his openly racist predecessor, former Gov. Jan Brewer. Most notably, the fascistic former sheriff of Maricopa County in Arizona, Joe Arpaio, endorsed Ducey.

Ducey and his legislative cronies did everything they could to defeat funding for public schools before, during and after the strike. Arizona is a haven of for-profit charter schools.  The state’s leaders would like to keep it that way.

Comments and posts flooded the Arizona Educators United (AEU) Facebook page on the evening of Aug. 29, calling for immediate action. Arizona Education Association (AEA) President Joe Thomas invoked words attributed to labor activist Joe Hill: “Don’t mourn.  Organize!” (An immigrant from Sweden and later organizer for the Industrial Workers of the World, Hill was executed by the state of Utah in 1915.)

In the days after the state Supreme Court ruling, education workers rallied at the state capital in Phoenix.

Thomas encouraged AEA members to wear red to school to show strength in numbers and express solidarity.  In the spring, education strikers had donned red in West Virginia and Oklahoma, while Arizona school employees created the #RedforEd movement.

The National Education Association called on all its members to wear red at least one day a week, and declared Tuesday, Sept. 4, national #RedforEd day. On that day, thousands of education workers across the country wore red in solidarity with their Arizona colleagues.

The next day, education workers and their supporters picketed the Chamber of Commerce in Phoenix for funding the legal challenge that got the #InvestinEd Act removed from the ballot. An action also took place in Tucson.

… and more on the horizon

The wave of education worker walkouts has spread into the 2018-2019 school year. Thousands of education workers walked out on the first day of school in Washington state. Some 98 percent of teachers in Los Angeles, the majority of them African-American and Latinx, voted to authorize a strike for the first time in 30 years. While labor leaders are focusing on the November elections, promoting the pro-capitalist Democratic Party, rank-and-file education union members are weighing all options.

Despite the state of Arizona’s broken promises to fund public schools,  educators are not giving up their struggle. In fact, the AEA and AEU are now using the phrase #StillInvestedInEducation. Arizona’s education workers are using the betrayal as a teachable moment to build the fightback.