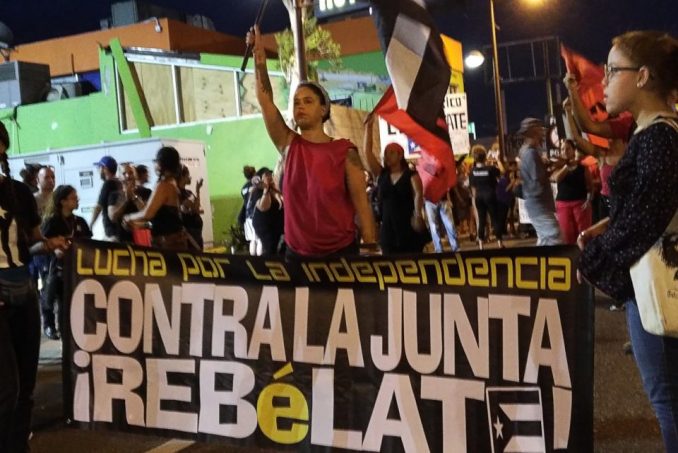 A dramatic, torch-lit nighttime march through the streets of the Isla Verde neighborhood denounced the second anniversary of the U.S.-imposed Fiscal Control Board dictatorship on Aug. 31. Ranging in age from families with babies in strollers and elementary school children to elders, participants gathered at dusk in a Banco Popular parking lot. Fiscal Control Board Chairperson Jose Carrion III has deep family ties with this bank.

The lead banner, “Lucha por la indepen­dencia, contra la junta Rebélate!” [Fight for independence, rebel against the junta!], was followed by a single woman who held high a huge black and grey Puerto Rican flag — muting its vibrant red and pale blue colors as a symbol of resistance. Then a contingent twirled and danced with large red silk-screen “Ahora” flags to the beat of chants and protest songs. Large placards, mounted on polyvinyl chloride pipes painted black, displayed main demands and themes: no privatization, no recortes (cuts), the government is anti-worker, fuera policía (police, get out), no cenzas (coal ash), and to be poor is not a crime.

A heavy presence of riot-equipped police stood on every corner of this busy thoroughfare, reinforced with patrol cars and motorcycles flashing blue lights. Restaurants and shops lined one side of the march route while international hotel chains and high-rise condominiums lined the other, between the road and the nearby beach. The march stopped at the San Juan hotel to salute the workers there who labored tirelessly during Hurricane Maria, when the hotel was used to house U.S. agencies like the Federal Emergency Management Agency instead of providing shelter for families who lost their homes.

At the end of the march the police, shoulder to shoulder and backed by motorcycles, blocked the entrance to the Marriott Hotel to protect it from the final rally. Marriott is trying to take the People’s Beach and encampment adjacent to this hotel, in order to construct a parking lot and further destroy hurricane-resistant eco-features.

While the amplified voices of leaders of the organizations that united for the action rang out, vacationers forced to park on the roadside dragged their bags across the boulevard and around the rally. Speakers included representatives from teachers’ organizations, political parties and socialist and independence organizations. The final speaker called for moving from protest to organizing popular disobedience to the junta and its complicit government.

A leaflet distributed by organizers called for a #DiaDelDesempleo (day of unemployment) picket at the Fortaleza on Sept. 3, and actions on the anniversary of Hurricane Maria, Sept. 20, and to mark the 150th anniversary of El Grito de Lares, the first major revolt against Spanish colonialism that began on September 23, 1868.

These writers are in Puerto Rico gathering testimony directly from people who are affected by the historic hurricane of colonialism; they are preparing to put the U.S. on trial for 120 years of crimes against Puerto Rico at an International Tribunal on Oct. 27 in New York City.

Even in everyday interactions, the anger of ordinary Puerto Rican people smolders just below the surface. A Puerto Rican grocery store manager’s friendly expression changed when he described how domestic businesses are being squeezed out by the subsidy for U.S. investments.

Products like eggs “el pais” — produced in Puerto Rico by Puerto Rican establishments — are quickly snapped up and preferred by many shoppers. Yet in 2011 some 70 percent of eggs consumed here were imported, according to a Consumption Table from the Puerto Rico Department of Agriculture.

The parking attendant, at the lot we used during the demonstration, gave us back the money we paid when he saw a leaflet for the International Tribunal in New York. He said, ”You are helping our people.” The demonstration itself earned enthusiastic horn honks; workers came out of restaurants to take pictures.

Puerto Rico needs solidarity and reparations, not charity. Put the U.S. colonial crimes on trial Oct. 27 in New York City. More information and resources are at PuertoRicoTribunal.org, on Facebook and @PRTribunal on Twitter. Make a donation to help bring people from Puerto Rico to testify at gofundme.com/­tribunalpuertorico.