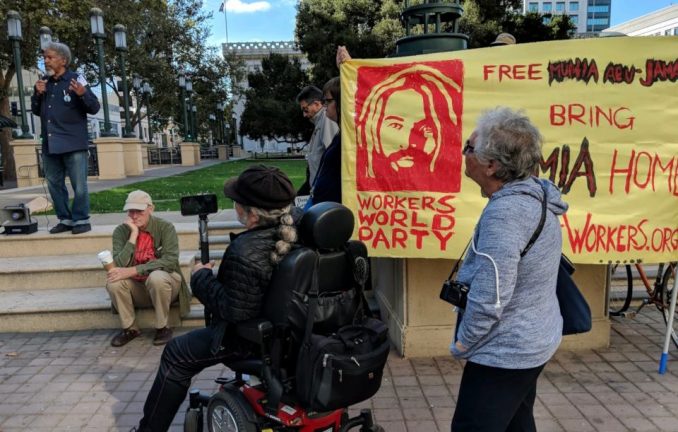 Oakland, Calif. — A rally to Free Mumia Abu-Jamal was held Aug. 28 at Oscar Grant Plaza in downtown Oakland, two days before a major court hearing considered Mumia’s case in Philadelphia on Aug. 30. Abu-Jamal is a political activist, journalist and internationally celebrated Black writer imprisoned in Pennsylvania for over 36 years, first on death row and now under a life sentence.

The rally brought attention to the fact that evidence shows now, as it always has, that Mumia Abu-Jamal is innocent. The evidence highlighted at the Aug. 30 hearing also exposed the true nature of the “injustice system” as corrupt.

That hearing pivoted on the fact that former Philadelphia District Attorney Ronald Castille, who was key in prosecuting and condemning Mumia to death row, went on to sit on the Pennsylvania state Supreme Court and to rule on Mumia’s later legal appeals, without recusing himself for conflict of interest.

The U.S. Supreme Court has ruled that it is unconstitutional for a judge to decide an appeal in a case where they had previously been involved at a hands-on level as a prosecutor.

On Aug. 28, the rally called for the freedom of Mumia Abu-Jamal and all political prisoners. Speakers demanded the release of other prisoners falsely accused and targeted by the racist injustice system, including Leonard Peltier, Mutulu Shakur, Jamil Abdullah Al-Amin (formerly H. Rap Brown) and Kevin Cooper. The rally also called for solidarity with the nationwide prison strike that began Aug. 21 and continues to Sept. 9.

Labor union resolutions and letters of support to “Free Mumia Abu-Jamal” were mentioned at the rally. These included an International Longshore and Warehouse Union resolution representing all 29 West Coast ports, and a letter from the Swedish Dockworkers Union. The latter called for an end to Mumia’s unjust imprisonment as well as an end to the racist oppression within and outside of prison that is carried out by a reign of police and neofascist terror.

An excerpt from the San Francisco Labor Council resolution sums up the “legal” crime perpetrated to keep Mumia incarcerated:

“Whereas, the Philadelphia District Attorney’s office has obstructed and covered up the evidence of Castille’s personal involvement in Mumia’s case, and stalled and denied the existence of memos and files showing that involvement. … Therefore Be it Resolved, that the San Francisco Labor Council demand full disclosure of all police and prosecutorial files relating to Mumia’s case by the [current] Philadelphia District Attorney Larry Krasner’s office with all deliberate speed, and moreover demand the immediate release of Mumia Abu-Jamal, who has been imprisoned for 36 years for a crime which he did not commit.”

Long-standing and militant union support for Mumia was documented in a press release from the Free Mumia Coalition: “The Fraternal Order of Police has unsuccessfully sought Mumia’s execution for decades. In 1999, longshore workers from the ILWU Local 10 shut down the ports and led a rally of twenty-five thousand in San Francisco to stop Mumia’s execution. From prison, Mumia, a former Black Panther, has written nine books and recorded over 3,000 commentaries on KPFA, Prison Radio and other outlets, which inspire and educate millions around the globe who identify with his struggles for justice and equality for all of humanity.”

It is urgent that we act now to bring attention to this injustice and secure freedom for Mumia. Call Philadelphia District Attorney Larry Krasner at 215-686-8000 and tell him that former DA Ron Castille violated Mumia’s constitutional rights and that Krasner must not obstruct Mumia’s legal petition.