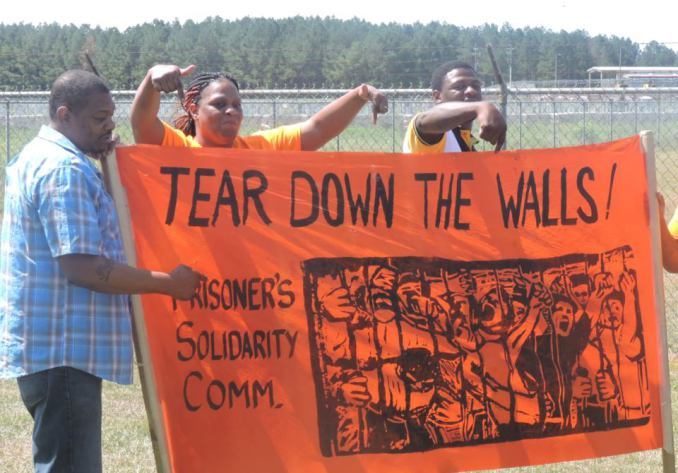 Families and allies of prisoners rally at the gates of Lee Correctional Institution in Bishopville, S.C., Aug. 25.

Conducted after an April 15 rebellion at Lee Correctional Institution, a South ­Carolina maximum security prison, this excerpted interview is Part 5 of a series. (Earlier segments are available at workers.org.) Lee was the deadliest prison uprising since the Lucasville Uprising on April 11-21, 1993. (See “Lucasville prison uprising 25th anniversary,” at workers.org) Jared Ware spoke with individuals inside Lee, one of whom identified as a member of Jailhouse Lawyers Speak, a group of imprisoned human rights advocates who called for the National Prison Strike from Aug. 21 to Sept. 9. Demands and support actions are at incarceratedworkers.org.

Jared: Lee Correctional Facility [in Bishopville, S.C.] was named after the county, Lee County. That county was named after Robert E. Lee, a Confederate general and a former slave owner, and a facility that is in his name. The county was first named Lee County in the 1890s after Reconstruction had ended. [Lee Correctional opened up in 1993.] What does it mean to prisoners that make that connection?

S: Prisoners who were probably from the Bishopville area who may have had that information through the educational system, or conscious prisoners who read and research things — those prisoners might be aware of that. But for the vast majority of prisoners, that don’t have any significance to them.

D: I would have to second that. I don’t think prisoners for the most part have any awareness of that. To be honest with you, as much reading as I have done, as much cultural reading as I have done, I was very ignorant of that up until very recently, up until the last several weeks. … We all know a prison is nothing more than a modern day plantation. So we understand that fact, really it’s quite fitting. But still, it would seem you wouldn’t want to name one of your state institutions. … It seems like someone would raise their hand and say, “No.”

A recent study not too long ago told us that Black people specifically were being automatically oversentenced by judges. It said if you were Black, you were 50 times more likely to get jail time for a minor offense versus if you were any other race. If you were compared to white defendants, you were over 70 percent more likely to be sentenced to longer sentences, based on your race. Everybody knows the color of the state of South Carolina when you walk into the prison system. All of this is an indicator of the nature of the beast that we are dealing with.

Even when South Carolina was going through Reconstruction, all of the Blacks that were a part of the Reconstruction phase were eventually thrown out of power, because there was a compromise between the North and the South. We have to always remember that. That’s when we get back to 1865, back to the 13th Amendment, that constitutional amendment and the compromise [to continue slavery in prison] that was reached across the table. The power dynamics in the South has never changed. And I think we’re seeing the rottenness of it in today’s times.

S: For example, one of my comrades was recently released from prison over the last year or so. He was housed at Lee County at one point and he was a coordinator on the compound. He was able to organize over 150 members every week to come together positively, sit down and have discussions. … Whenever there would be any type of altercation, they would try to talk over things first, and most often if they couldn’t, then they would handle it like men and knuckle it up. But there wasn’t so much knives, and people getting killed or stabbed up. All of that was calmed down for a while.

[Then] the STG (Security Threat Group) supervisor from headquarters got with the warden at that time, and they called [my friend] to a conference to explain how is it that you could have Crips, Bloods, Muslims, etc., in the same room every week and never any violence going on? The [STG] told [the warden] that [the prisoners] were “up to something.” And what did they do to [my comrade coordinating the program]? They shipped him to another institution.

To make a long story short, [then the administration at Lee] moved these guys around, piled all these guys up on one yard, waited for one thing to happen. Boom! You get the worst thing that happened in the last 25 years. [April 15] was strategically implemented.

D: All of this right here [in Lee Correctional] is not by accident. None of it is by accident. That’s the sad part about it.

S: Yeah, they were used as lab rats.

S: I want to say for society, to them: Let he who has not sinned cast the first stone. Prisoners, some of us in here, have made mistakes and some of us did the things we did. … But we have paid for our mistakes. Show some humanity. That’s what we want society to do — show some humanity.

So we ask folks to support it on the outside … really support these actions. Let the people know that wherever prisoners may decide to have a strike or a sit-in that the public is mindful, and are watching for any type of retaliatory actions that may take place throughout the process of this resistance that may be taking place across this nation.