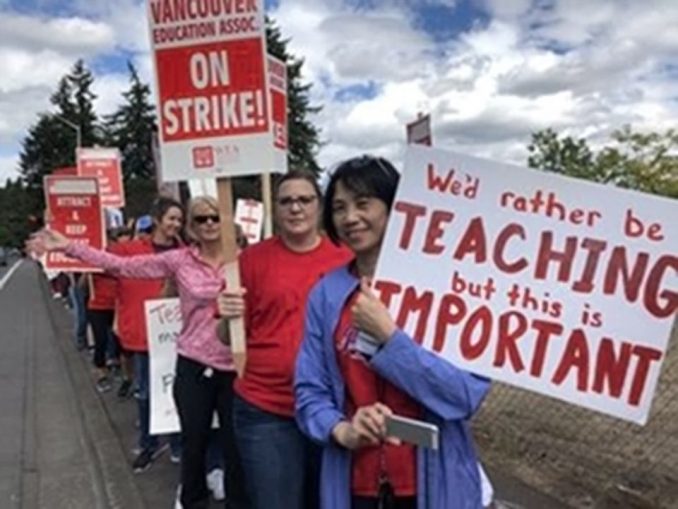 Teachers on the picket line in Vancouver, Wash.

In Seattle, after rallies and hard work, school teachers and staff reached a one-year tentative agreement with the Seattle School District on Aug. 31. They will vote on a contract with a reported 10.5 percent pay increase in the coming days.

Extra resources for schools have been mandated in Washington state since a 2012 state Supreme Court ruling. In “the McCleary decision” the court declared the state had the paramount duty to fund K-12 public education. The WEA, along with parents and community groups, had brought the McCleary suit.

But the anti-education and anti-labor state Legislature long delayed enforcement of McCleary, which was supposed to mean extra funds for schools. Held in contempt by the state court and fined $100,000 a day, the Legislature was finally forced to funnel billions into the education system. The court has now ruled the Legislature is “in compliance” with the McCleary decision.

But an attorney for the McCleary plaintiffs noted the court didn’t rule on “whether the state’s plan actually fulfills the constitutional definition of ‘ample’ funding for programs such as special education or student transportation.” (Seattle Times, June 7)

Drawing on the strength of the national Red for Ed movement, teachers are striking now over how the new funds will be distributed. The teachers, who have long been held back from pay increases, are striking for pay as well as other resources. Washington state class sizes are among the highest in the country.

By Labor Day, over a hundred school districts in the state had not yet approved contracts with the teachers for the new school year. On the first day of school, teachers stayed out in the southwest part of the state, including Longview and Vancouver, a city of 175,000. Near Vancouver, schools at Battle Ground, Hockinson, Ridgefield, Evergreen and Washougal school districts are all being struck.

Strike authorization has been approved by teachers in a half dozen other districts.

“It’s super-encouraging, the community support we’ve had this week. Teachers have been paid too little for too long,” said Tiffany Schumacher, a teacher at Mountain View High School in the Evergreen School District. (washingtonea.org)

Community support is so strong that it has forced superintendents in Vancouver and Washougal to back away from earlier threats of legal action against the teachers.