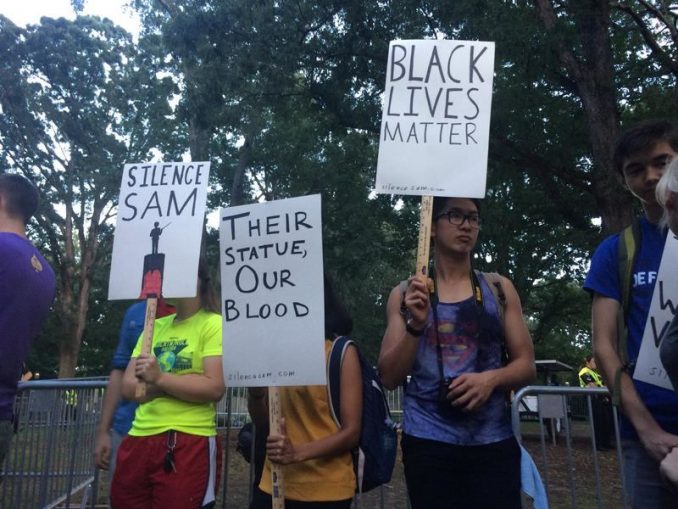 Anti-racist protesters gather Aug. 30 on the campus of the University of North Carolina-Chapel Hill.

Chapel Hill, N.C. — Barricades surrounded the stump of Silent Sam and other monuments on the campus of the University of North Carolina at Chapel Hill on the night of Aug. 30. Silent Sam, a symbol of white supremacy that had stood at the entrance of campus since 1913, had been righteously toppled by students and the community on Aug. 20.

Students and community members were gathering for what was billed as a “dance party and speakout.” This was the third student-led protest against racism in 10 days.

As crowds of mostly students began to approach the site, a half dozen white supremacists began to approach as well. The white supremacists were quickly swarmed by the media, who attempted to give the bigots a platform. These efforts were met swiftly by counterprotesters who successfully drowned them out. Chanting “Nazis go home!” the protesters shifted the media’s attention to the night’s message: Cops and Klan were not welcome.

Almost 300 protesters had gathered for the event. There was music, dancing and free ice cream mixed in with chants of “Black Lives Matter!” and “Cops and Klan go hand-in-hand!”

However, when the white supremacists appeared, the atmosphere shifted to a decidedly more focused and passionate defense of the campus and its students. The prepositioning of the barricades and industrial floodlights around the empty pedestal for racism became clear.

The cops escorted almost 70 white supremacists associated with Alamance County Taking Back Alamance County through the crowd, past the barricades and into the pen around the statue’s remnants. Waving Confederate and Christian flags and holding placards defending their bigotry, the ACTBAC members were protected by cops.

The racists were followed by protesters, who chanted and shouted down both the cops and the Klan. Then, without warning or provocation, a police officer discharged a can of pepper spray on the students, members of the media and others in the crowd.

As the numbers of protesters dwindled, cops took the opportunity to arrest three people. Two were charged with affray (breach of the peace), and one was charged with resisting an officer.

UNC-CH Chancellor Carol Folt released a statement Aug. 31 that the UNC system’s board of governors had approved identifying “a safe, legal and alternative location for Silent Sam.” Folt noted the monument’s “contentious history” but failed to denounce its explicitly racist history and meaning.

Defend UNC, a coalition of students, faculty and community members, released a response to this statement later that day. The group challenged the university’s statement, pointing out its “distorted falsehoods” regarding the historic and present context of the racist statue and the fight for its removal.

Defend UNC also condemned the response of the president of the UNC state system, Margaret Spellings, as well as politicians and cops, emphasizing that they “have decided to side with white supremacy, and for that they will not easily be pardoned.”

The protests have seen an increasingly militaristic response from campus and Chapel Hill police. However, official rhetoric from the university continues to construct a false narrative of violence and “mob rule” on the part of protesters when describing the struggle of students to remove white supremacist symbols from campus. To date, sixteen anti-racist organizers face charges stemming from the protests on campus.

Watts is a student at UNC Chapel Hill.