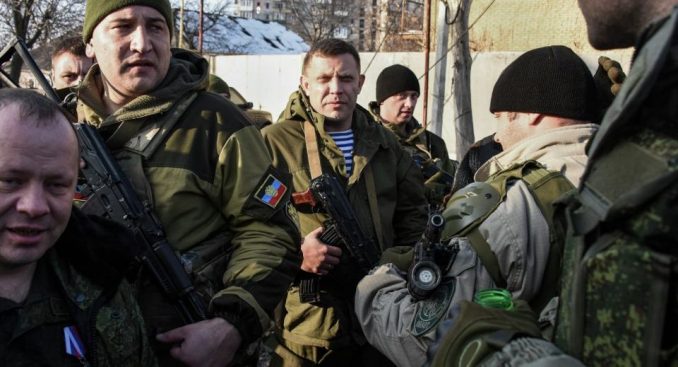 Alexander Zakharchenko (center) during the battle of Debaltsevo in Feb. 2015.

Alexander Zakharchenko, prime minister of the anti-fascist Donetsk People’s Republic, was assassinated on Aug. 31 when an explosion ripped through the Separ restaurant in the capital city of Donetsk.

Denis Levin, a communist worker from Ukraine living in political exile in Donetsk, told Workers World that the restaurant was often frequented by families and children.

Twelve people were taken into custody on suspicion of participating in the planning and conduct of the bombing. According to DPR authorities, the terrorist act was carried out by the Security Service of Ukraine (SBU), through operatives trained by U.S. and NATO military and intelligence services. (Sputnik News, Aug. 31)

Zakharchenko, a small businessperson and the son of a coal miner, participated in the anti-fascist uprising and militia movement in the Donbass region of eastern Ukraine, following a right-wing coup in Kiev, the Ukrainian capital, in early 2014. The coup was backed to the hilt by the United States, which actively collaborated with local oligarchs and neo-Nazis.

In April 2014, with U.S.-NATO support, the Ukrainian regime opened up a brutal war against the people of Donbass. The war has so far cost more than 10,000 lives, according to the United Nations. That May, popular referenda established Donetsk and Lugansk as independent people’s republics.

Zakharchenko became prime minister of the DPR in August 2014. As a respected militia fighter without strong political ties, he was seen as a compromise figure between the left-leaning and anti-establishment forces that led the Donbass uprising and the more conservative, pro-capitalist forces backed by the government of the Russian Federation.

Donbass desperately needed the support of neighboring Russia, then and now, as it is cut off from food, medicine, equipment and other basic needs by a Western blockade.

Zakharchenko was closely identified with the Minsk accords, a set of agreements he signed in early 2015 with the participation of Germany, France, Russia and Ukraine, to end the war and bring about a peaceful resolution to the conflict. However, the Western-backed government in Kiev, headed by President Petro Poroshenko, has never respected the accords. The Ukrainian side continues to shell residential areas along the line of conflict, including the outskirts of the Donetsk capital. 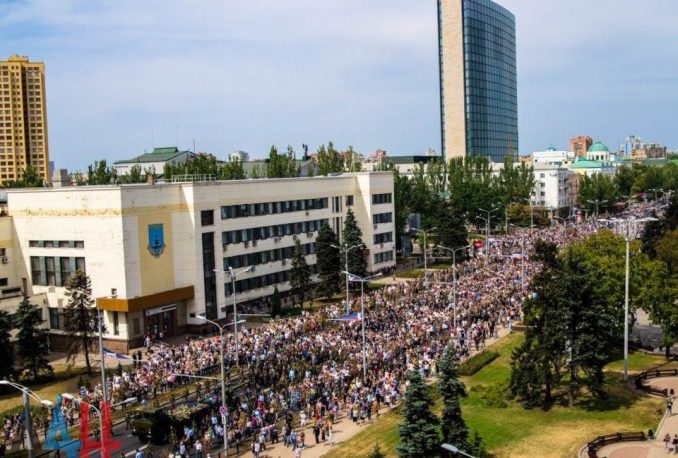 Despite popular disenchantment with the Minsk accords and the difficulties caused by the blockade, Zakharchenko remained personally popular as a symbol of the united front against the Ukrainian regime.

Zakharchenko usually wore his militia fatigues, emphasizing the state of siege of the republic, and was frequently seen at the front among the soldiers defending against the Ukrainian Armed Forces and neo-Nazi battalions. In February 2015, he was wounded in action during one of the last battles that successfully turned back a Ukrainian military offensive.

He had a down-to-earth style modeled after one of his heroes, Fidel Castro, and frequently went among the residents of the republic to listen to their problems. He established an online video dialogue with residents of Ukraine and areas of Donbass under Ukrainian occupation. His style was credited with bringing a sense of daily normalcy back to the war-battered capital city.

Zakharchenko’s assassination was condemned by the governments of the Russian Federation and the Syrian Arab Republic. (SANA, Sept. 1) Russian President Vladimir Putin offered his personal condolences to the people of Donetsk. (TASS, Aug. 31)

On Sept. 2 tens of thousands of people came to the Donetsk Opera House, where Zakharchenko lay in state, to pay their final respects. Some 200,000 people lined the streets for his funeral procession. (Novorossia News, Sept. 2)

Other assassinations have been carried out by the SBU in Donetsk, notably of two popular militia commanders close to Zakharchenko, known by their military call-signs Givi and Motorola.

There were also earlier attempts on Zakharchenko’s life, most involving car bombs and sniper attacks.

However, the assassination of the prime minister through a terror attack on a civilian target in central Donetsk is at a whole other level. Such an act could not have been carried out by a politically, economically and militarily dependent regime like Ukraine’s without high-level U.S. approval.

As if to underline the U.S. role in the murder, the following day Ukrainian President Poroshenko stood side by side with NATO head Jens Stoltenberg at the Washington funeral of war criminal Sen. John McCain, who was part of the bipartisan bloc that helped bring the Ukrainian junta to power during the Barack Obama administration. (Interfax-Ukraine, Sept. 3) McCain famously shared a platform with Ukrainian fascist Oleh Tyanybok in Kiev before the 2014 coup.

So it’s important to ask: Why was Zakharchenko assassinated now, and in this way?

Of course, an attack like this is meant to sow fear in the residents of Donbass and shake confidence in the government of the anti-fascist republic. In this respect it failed, as shown by the defiant mass outpouring for Zakharchenko’s funeral.

But the attack must also be seen in an international context.

Zakharchenko’s assassination came as the Syrian Army, with support from its Russian, Iranian and Hezbollah allies, moves to retake Idlib province, one of the last strongholds of the Western-backed contra armies in Syria. (See article by Karin Leukefeld in Junge Welt Aug. 30 / workers.org Sept. 1)

Just days before, the Russian military warned that U.S.-backed forces could stage another “false flag” chemical weapons attack in Idlib, of the sort used so frequently to justify prolonged Western intervention in Syria. Syria’s representative then presented evidence of such a plan to the United Nations. (FARS News Agency, Aug. 29)

Was the assassination of Zakharchenko a warning to Moscow and its allies, an act of retaliation for their exposure of the planned provocation in Idlib?

Throughout the long imperialist war to dismember Syria, Ukraine has frequently been used by the West as a looming threat against Damascus’ ally — the threat of a second front on Russia’s Western border that could flare up at any moment.

It also comes amidst the deepening internal struggle inside the U.S. ruling-class political establishment over which direction the Pentagon war machine and CIA is to take: further toward war with Russia, as advocated by Democratic Party and establishment Republican Party leaders, or toward other targets, including Iran and China, as prefered by Trump.

Anti-imperialists and anti-war activists must not disregard the assassination of the Donetsk leader as a local event of limited significance. Instead they should see it as a warning sign of the need to redouble efforts to reach out to poor and working people here, to counter the anti-Russia witch hunt, and to mobilize to stop U.S. intervention everywhere!

This is the best tribute we can pay to fallen anti-fascist Alexander Zakharchenko.