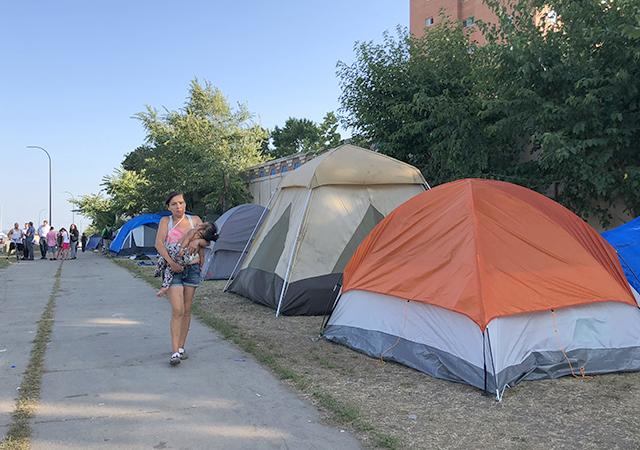 Minneapolis — A camp of nearly 200 homeless people has sprung up along the shoulder of state highway 55, where it merges onto East 22nd Street south of downtown Minneapolis. The camp is composed almost entirely of oppressed peoples, many from the Ojibwe and Lakota nations as well as some Black and Latinx residents. These reporters interviewed residents and community volunteers there on Aug. 26.

Police ride through frequently and lately have upped patrols to as many as four a day. According to Natives Against Heroin (NAH), many people came to the encampment because the police had changed their tactics from removing the camp to gathering any nearby homeless people into the camp. Their strategy now seems to dovetail with an upcoming city plan to relocate the camp a few blocks east to a wooded area on Sept. 1.

“Trying to hide the problem,” commented Becky, a middle-aged Indigenous woman resident. “They’re trying to move the poor out of the city, out of view, while they’re planning all these restaurants, all these condos.”

Becky, a mother of six, homeless since losing her house in August 2017, explained that the encampment arose as a handful of tents on the side of the highway. The county police would sweep through, pick up everyone, confiscate their belongings, and drop them off somewhere miles down the road. However, at one point, the congregation of tents swelled “too big [and] too fast” to be swept away quickly.

The increasing population is a mixed bag for residents. The community getting too big to be bullied out of its encampment has made the police back off and has gained medical attention from the county in the form of professional visits and clean needles. But growth has also coincided with the introduction of both drug dealing and trafficking of Indigenous women.

“The police don’t police anything,” exclaimed Greg, an older Indigenous man. After explaining how one of NAH’s most valuable contributions to the camp was sharing healing songs with the community, Greg told Worker’s World: “The only way we’re going to stop the epidemic of heroin use is by bringing back our culture.”

When Greg tried to confront a drug dealer who had entered the camp, he and another resident were shot at three times. Law enforcement proved unhelpful: “The cops didn’t care who was involved in the shooting,” he said.

Pressure from the police

NAH has been working in the camp this summer, providing food, water, ice and harm reduction for the camp’s opioid sufferers. NAH members stress that, while drugs were always present in the camp, drug dealing didn’t become an issue until the police started funneling more people into the camp and subjecting them to more pressure.

“Cops are telling people they have to get to the wall,” said Jackie, an NAH member. The encampment is on a road shoulder, with a concrete wall beyond it. Police say the encampment can stay as long as there’s enough space for cars to drive by, so residents have to live as “close to the wall” as possible.

Community members explained that the treatment they experience from cops when they’re alone is completely different from how police treat them when they are in a group. “[The police] can abuse us and get away with it, and we don’t get to say anything,” Becky said.

Samuel, another Indigenous resident, homeless for about two years, also explained: “Transit cops are bad. They can push you, and they have a short fuse. Whatever you’re going through, they don’t want to know.”

Several organizations have been giving aid to the community since long before the police stopped trying to remove residents. In addition to NAH, the local Kingdom Power Ministries 4:20 has been providing food, clothing and water for about the last six weeks. Its initial outreach came straight out of pocket — a common theme among those providing much needed assistance to the camp.

Kariyma Nisaa Borer Nelson, who runs KPM with her spouse Jordan Borer Nelson, said, “[The residents] don’t want to be here. If they could get out of this situation today, they would. But the shelters are full, and people need help.” The two post daily livestreams of the camp on their personal Facebook pages.

Nelson continued, emphasizing that what many don’t know about the people living there is how “a lot of these people come from abusive families. This tent city is like a family for them.” People driving by on Hiawatha Avenue will look on, but they don’t realize that “these people have stories.”

Echoing this sentiment, Becky states: “Some of us feel like we’re the zoo here.”

Not only do the residents of the camp have stories, they also have determination to improve their lives, as well as first-hand understanding of the systemic forces which put them in this situation.

A restrictive system and attacks on public housing

Federal Section 8 housing vouchers are issued in Minneapolis on a limited scale. Participants are given vouchers which cover a third of the rent — if they can find an apartment to accept the vouchers from a program for economically brutalized, poor, working-class and marginalized peoples.

Samuel, the father of an eight-year-old daughter, had his housing voucher revoked and was never told why. Even with Minnesota’s Group Residential Housing assistance, he was left with just $100 a month for living expenses after paying the rest of his Supplemental Security Income toward housing fees.

These days Samuel moves in and out of stabilization and crisis centers, which keep people for only 10 days at most. He stays on the move to keep warm through harsh Minnesotan winters, to keep his mental health stable and occupied, to find new resources and, perhaps most importantly, to keep away from the police.

“I know I have to yell and scream and bitch to get people’s attention,” Samuel said. “But I’ve been to jail and incarceration is not the answer. … I try to get treatment [at medical facilities], and they say, ‘This is not a place to sleep.’ But I’m not there to sleep. I’m there to get treatment.”

Samuel continued, pointing at the recently installed U.S. Bank Stadium on the skyline: “There’s a huge stadium over there. It’s widely considered among locals as a handout to corporations. [It] infamously made surrounding community medical centers cease service for multiple days during the Super Bowl.

“Why can’t we stay there?” Samuel exclaimed. “I don’t think they’re even using it right now. If it can’t be there, why couldn’t it be the Armory? Or down by Raspberry Island? Or even the state fairgrounds? We can do it ourselves. Build it, live on it, farm it.”

Minneapolis Public Housing Authority has plans to get rid of its public housing facilities and privatize them, converting to a program similar to the federal Section 8 voucher program. Developers could then have a chance to profit from relinquished public property.

Many people who would be displaced belong to oppressed nationalities. In the problematic voucher system, landlords can legally exclude potential tenants simply because they’re voucher holders without the protection of Fair Housing regulations. In particular, those in the Twin Cities Somali community — many of whom are refugees from U.S. imperialism to begin with — risk being hit with an acute housing crisis.

Housing shortages and homelessness could become a problem for more people in the Minneapolis-St. Paul area than those couple of hundred in the camp at highway 55 and 22nd Street, who are getting ready to face the bitter winter.